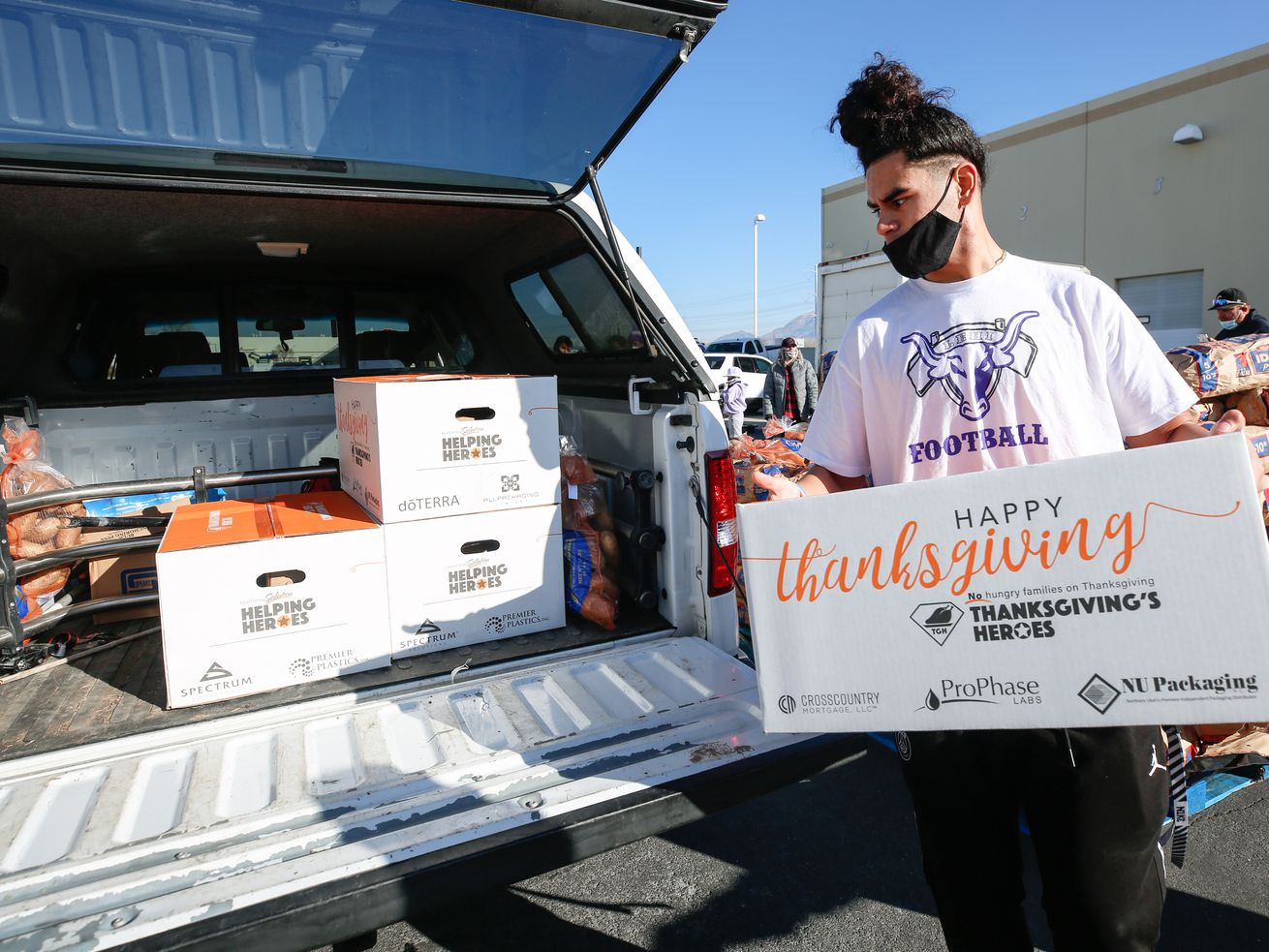 Josiah Westover, a Thanksgiving’s Heroes volunteer from Lehi High School, places a box of food into a car at Spectrum Solutions in Draper on Saturday, Nov. 21, 2020. | Yukai Peng, Deseret News

DRAPER — One year ago over the holidays, Lance Bush learned he had colon cancer.

During that difficult time, he said his family received “a lot of love” from friends, who took care of their Thanksgiving and Christmas.

That’s one reason Bush says he teamed up with his daughter and her boyfriend to help deliver Thanksgiving meals to families in need on Saturday as part of the annual Thanksgiving’s Heroes food drive.

“The reason that we wanted to do it this year for sure, is we’ve got in our family a lot to be grateful for. And last year, we were in a very different situation,” he said, noting that after undergoing chemotherapy during the summer he is now cancer-free.

“And just being able to be a part of something giving the love back — and giving people something to smile about this holiday — it’s really why we’re into it. Because there’s so many bad things that you can go through in winter. You’ve got a lot of people out there who are dealing with things they don’t understand or can’t explain, and I think that we’ve got to give back,” Bush said.

Several hundred vehicles lined up in Draper to pick up large boxes that each included a turkey, stuffing, gravy and all the other Thanksgiving essentials, as well as a large bag of potatoes. The meals were meant for 2,500 families from as far south as Nephi and north to Logan, said Rob Adams, who started the nonprofit six years ago.

The Bushes loaded up their car with three of the large boxes and set out for homes in the Lehi area.

One of those homes belonged to Amanda Gafford, who said she was surprised by the food left at her door by strangers.

Gafford currently fosters 12 kids between the ages of 4 and 18, including some of her grandchildren and nieces to prevent them from going into the foster system as their parents are in prison.

“I’ve had a lot of struggles this year for having how many kids I do have,” Gafford said.

“I’m grateful having people give to me right now, because I’m usually the one that’s always like, ‘Here, we need to give this to this person or give this to that person.’ So I’m grateful to take the help that I can get this year,” she said.

“I appreciate you guys helping me out so much,” Gafford told the Bushes.

She said it’s important to her to foster children because of her own childhood with a mother who was addicted to drugs and alcohol. Gafford went on to have a daughter at age 16, she said.

“I’m just here trying to fight for a whole bunch of kids who some people are not fighting for. … I’ve been in …read more