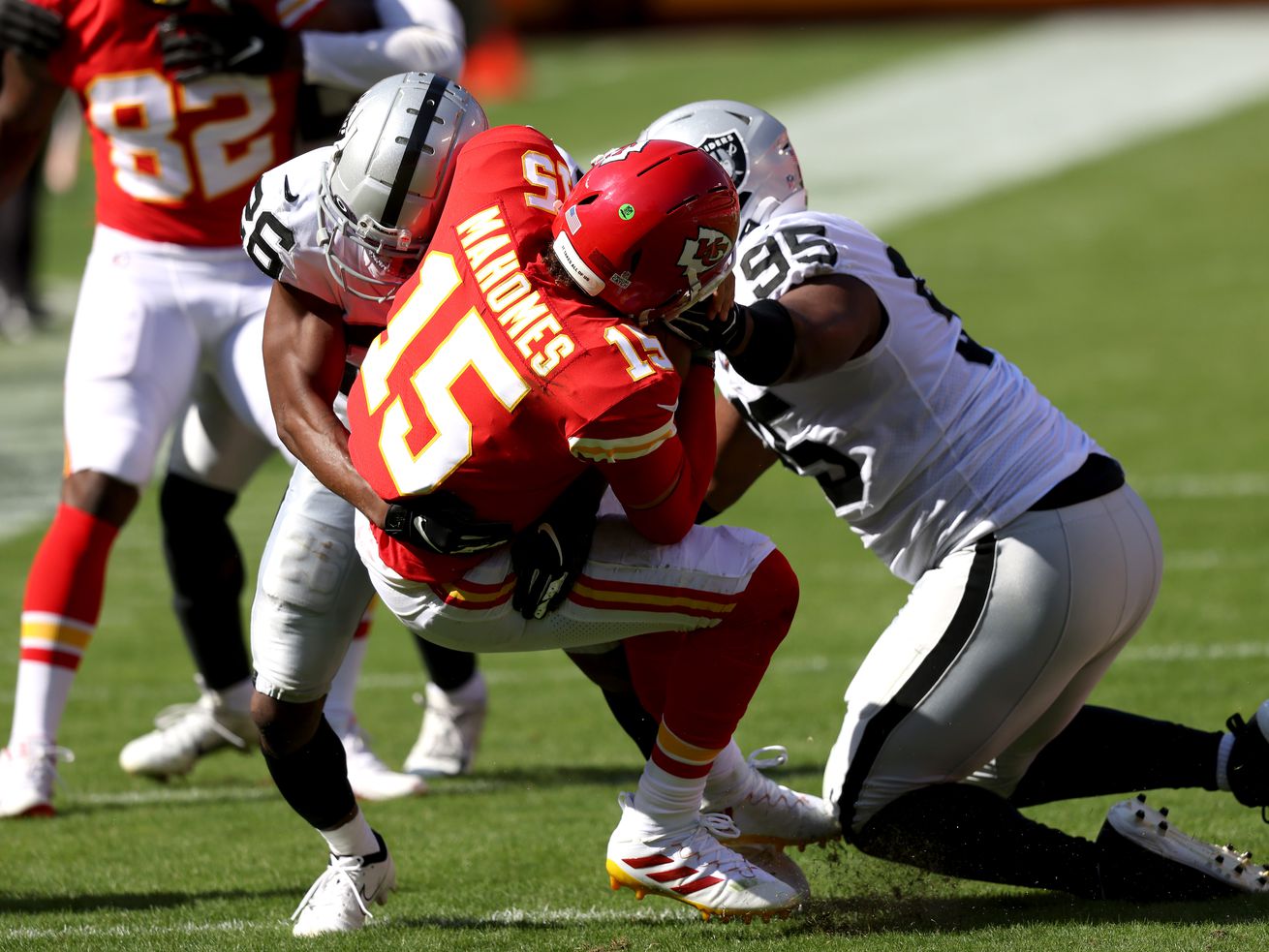 The Raiders got the better of Patrick Mahomes and the Chiefs in the teams’ first meeting this season. | Photo by Jamie Squire/Getty Images

Don’t know about you, but I sure can think of one thing to be thankful for as the sports world barrels forward into a new week.

It can be summed up in three little words, my friends. Three blissful, delightful, liberating little words.

Can I get an amen from the congregation?

While Nick Foles heals, Mitch Trubisky ponders the possibility of a second (third? fourth?) chance, Allen Robinson wonders what he ever did to anybody to deserve this and Matt Nagy locks himself in the bathroom and gazes longingly at his old play-calling sheet, football games will go on.

Sunday will bring wall-to-wall playoff implications to our living rooms, with the Titans-Ravens, Packers-Colts and Chiefs-Raiders matchups all meaning a great deal. And Thursday? Enjoy a side of turkey with that Thanksgiving triple-header: Texans-Lions, Redskins-Cowboys, Ravens-Steelers.

Notre Dame plays another biggie, this one Friday at North Carolina. The Tar Heels are so dangerous offensively, charming old coach Mack Brown might as well have circa-2005 Vince Young running the show.

The point here is, football goes on without the massively struggling Bears. And let’s just be honest about it: Phew! It’s kind of nice not to have to watch and suffer through three hours of death by dink-and-dunk.

“I think the No. 1 thing we’ve got going for us right now is we’re into the bye,” Nagy said after the Bears’ fourth straight loss.

Nailed it. And here’s what’s happening:

Other than 565 touchdown throws and upward of 80,000 passing yards, what does injured Saints quarterback Drew Brees really have that backup Taysom Hill doesn’t? The Falcons, meanwhile, have sneakily stopped being horrendous, winning three of their last four.

Two of the AFC’s six — six! — 6-3 teams go at it. At least two of those six squads are going to miss the playoffs, you know.

Leicester sits atop the Premier League table, but Liverpool is hungry. Then again, who isn’t? And is it too early in the week to begin drinking gravy?

The Colts seem to be hitting their stride, while the Packers are kind of just getting by. Yes, that’s another way of putting “coasting to the NFC North title.”

The defending Super Bowl champs are 8-1, but that “1” is thanks to the Raiders. The good news for the Chiefs is QB Patrick Mahomes has been so busy shooting commercials since Week 5, he doesn’t even remember taking that “L.”

Tom Brady has a career record of 18-7 on Monday nights. Only 25 appearances on “MNF” for the GOAT? That’s surprisingly few considering his first handful weren’t even televised in …read more

Pilgrimage of Virgin of Guadalupe and St. Juan Diego images will stop at La Placita parish in L.A.

39 unique subscription boxes and services that keep on giving

The 100+ best Black Friday store sales of 2020, from big-box retailers to our favorite startups