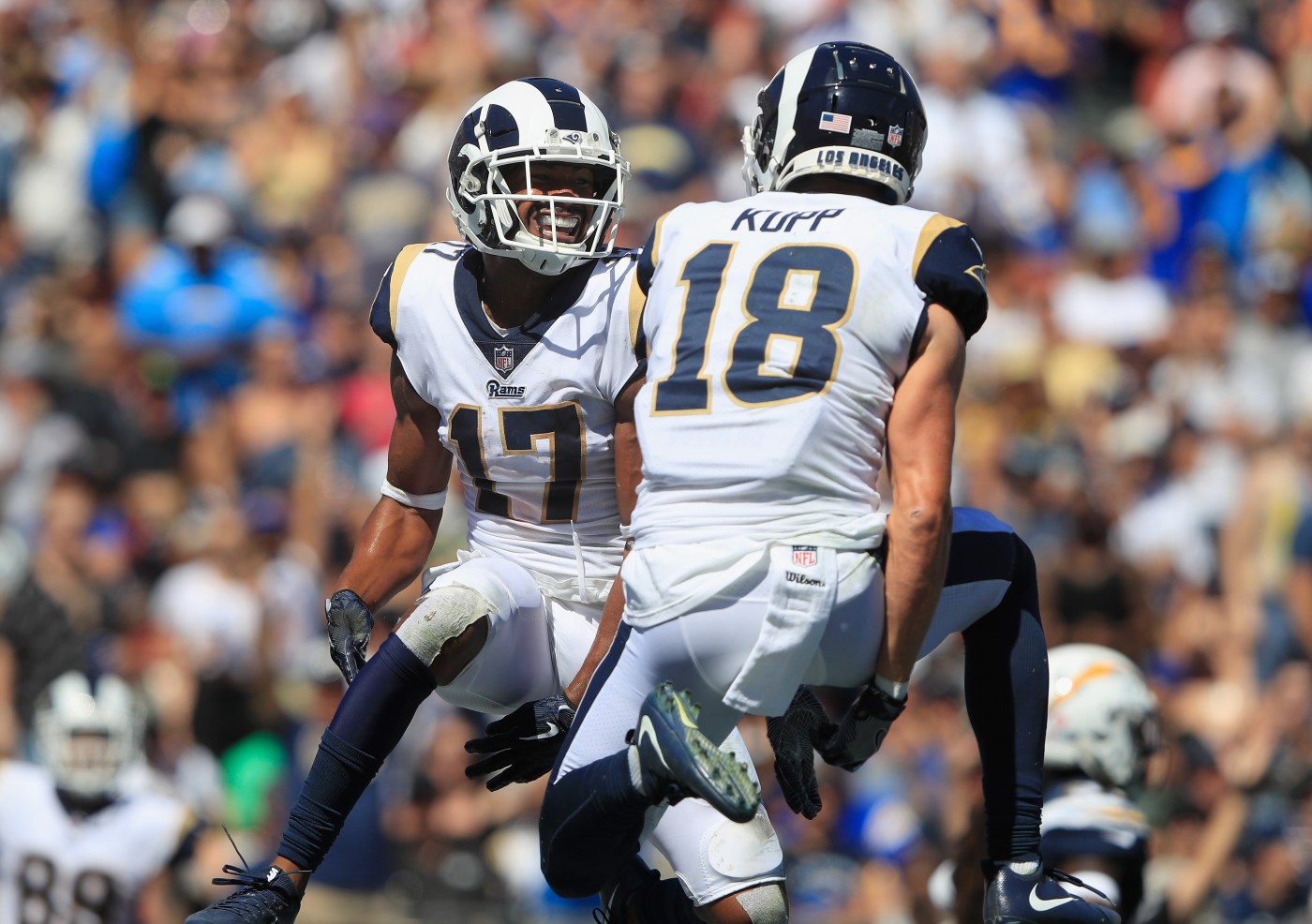 THOUSAND OAKS — Robert Woods didn’t sound frustrated, wasn’t complaining, and wouldn’t have aired his complaints in a video press conference even if he had them.

The Rams wide receiver was just describing a feature of the offense, which changed when running back Todd Gurley was replaced by three fresh-legged ballcarriers.

But it’s a feature that could turn into a bug for receivers like Woods and Cooper Kupp who are used to producing big plays and big games.

Woods said Friday the Rams are “spreading the ball around to a lot of different guys, kind of feeding off of the hot hand.”

“Our ground game has done really, really well right now. So it’s kind of like we’re going to keep utilizing it,” Woods said. “Big plays with me and Cooper are going to come.

“Right now we’re just taking advantage of what the defense gives us, keep winning those possessions and keep winning games.”

As the Rams (6-3) travel to face the Tampa Bay Buccaneers (7-3) on Monday night, they’re trying to get their offense to catch up to their impressive defense.

As pleased as they’ve been to see running backs Darrell Henderson, Malcolm Brown and Cam Akers share carries, eventually they need more of the old displays from Kupp and Woods.

Loading up on rushing plays with a “running back by committee” has in effect created a whole offense by committee. Or an offense by Congress, if you like. How productive does that sound?

The Rams are 10th in the NFL in offensive yards per game (395.6), but they’d like to be better at creating explosive gains and turning yards into points.

Their yards have come from, as Woods said, spreading the ball around to eight different receivers and running backs averaging between 25 and 70 yards from scrimmage per game.

And that’s different from the Rams’ first three years under coach and play-caller Sean McVay, when Gurley, receiver Brandin Cooks, Woods and Kupp stood out with seasons of 70-plus, 80-plus — in Gurley’s case, 130-plus — total yards per game.

The running-back committee has advantages, as Tampa Bay coach Bruce Arians said Thursday in talking about Henderson, Brown and Akers.

“They’ve got three backs, really, that are just fresh all the time,” Arians said. “They’re different, but they’re also very similar. The style of what they do with each one is pretty much the same.

“They’ve added some more power game, some more gap-scheme stuff (since releasing Gurley), that makes them a little harder to defend.”

But the Rams’ division of labor is reducing chances for stars like the $16.25 million-per-year Woods and the $15.75 million-a-year Kupp to help the offense break out.

Asked about it Saturday, McVay said the Rams need more big plays and big games from Woods and Kupp.

“Yeah, I think so. We’ve got to be able to make some more plays, …read more

The freeze on federal student loan payments expires on December 31. With no action from Trump or Congress, the Biden administration will have to move quickly to protect millions of borrowers.

The creator of AstraZeneca’s coronavirus vaccine is a mom to triplets. Her children participated in the trial.

Why I love this plant in my garden, and why I think you will, too