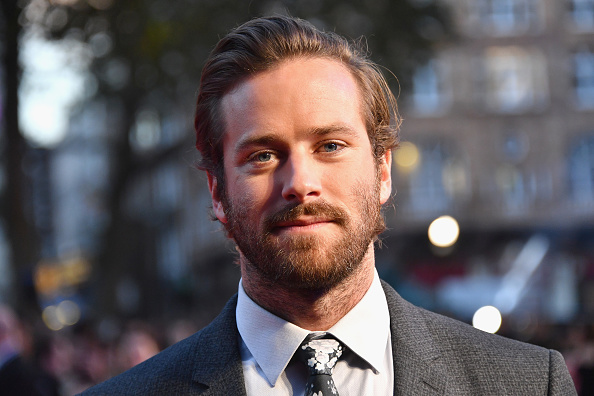 The 34-year-old has confirmed he has left the Jennifer Lopez movie Shotgun Wedding, while calling the allegations made against him ‘bulls***’.

And, according to Deadline, Hammer ‘quietly’ dropped out of the upcoming UCP series Gaslit, which is set to star Julia Roberts, Sean Penn and Joel Edgerton, several weeks ago.

Hammer was attached to Gaslit in February 2020, ad was set to play White House counsel John Dean in the series described as a modern take on the Watergate scandal that focuses on the untold stories of some of the forgotten characters of the political drama.

However, it is believed he left the project due to scheduling clashes with another role in the Paramount+ series The Offer.

Hammer signed on to play The Godfather producer Al Ruddy in the limited series last month.

He wrote on Instagram at the time: ‘So beyond excited to finally announce the newest @paramountpics project about not only one of the best movies ever made, but also a chance to play my friend Al Ruddy in a series about The Godfather! If you thought the movie was good, wait till you see what it took to get made…. So long 2020, 2021 is looking pretty good…’

This news comes amid controversy over DMs leaked on social media which have been attributed to Hammer, which described disturbing sexual fantasies.

The Social Network star addressed the allegations last night, saying: ‘I’m not responding to these bulls*** claims, but in light of the vicious and spurious online attacks against me, I cannot in good conscience now leave my children for four months to shoot a film in the Dominican Republic.

‘Lionsgate is supporting me in this, and I’m grateful to them for that.’

Hammer had been set to play one half of a couple with Jennifer Lopez who gather their families for a destination wedding just as they begin to get cold feet, only for the whole party to be taken hostage.

A production spokesperson said: ‘Given the imminent star date of Shotgun Wedding, Armie has requested to step away from the film and we support him in his decision.’

The role is set to be recast.

As well as starring in The Offer, Hammer is due to appear in two films this year – Crisis, alongside Gary Oldman and Evangeline Lilly, and the Agatha Christie sequel Death On The Nile, which was pushed back from last year’s release date.

The Call Me By Your Name star shares two children, six-year-old Harper and three-year-old Ford, with his estranged wife Elizabeth Chambers.

In July, the pair confirmed they were separating after 10 years of marriage, …read more

Dave Bautista offers $20,000 to catch whoever carved ‘Trump’ onto manatee’s back