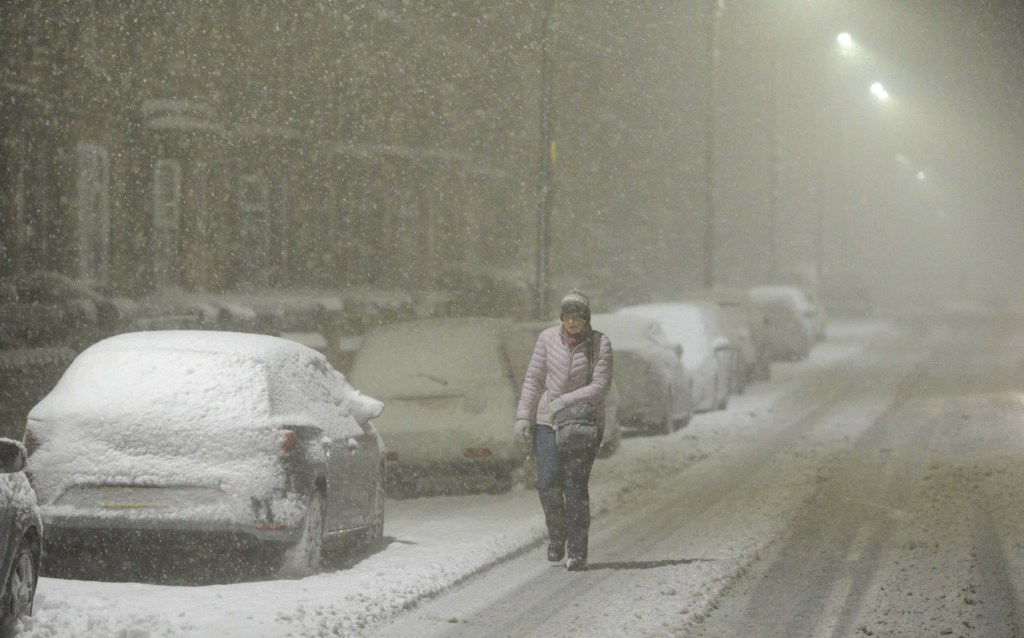 A woman braves a blizzard in Consett, County Durham, as the snow continues to fall this morning (Picture: North News)

Heavy snow and freezing rain is set to batter the UK this week with Brits warned for power cuts and travel delays.

Up to 30cm of snow could fall in Scotland, while parts of northern England could see around 20cm.

The Met Office has issued an amber snow warning for these areas, with forecasters warning that some roads may be affected by deep snow.

This could leave vehicles stranded, while there is a ‘good chance’ that some rural communities could become cut off.

The warning lasts until 10am, stretching from the Borders to the Highlands.

The rest of England will see heavy rainfall, particularly in London and the South East, while Wales and Northern Ireland are predicted to stay mostly dry.

John Griffiths, a Met Office forecaster, dismissed any link to the widely reported ‘Beast from the East 2’, simply saying the conditions are ‘normal’ for the winter weather cycle.

He said: ‘On Thursday a band of rain, sleet and snow will hit parts of Scotland and northern England, which will slowly extend south to the Midlands as the day progresses.

‘It is expected to be very cold in these areas, dropping below 0C (32F) in Scotland and parts of northern England.

‘This will start to gradually ease and die out during the evening, with frost and freezing fog coming in.’

Mr Griffiths said Friday will ‘start cold and foggy’, with most areas becoming dry and bright over the rest of the day.

He said a yellow weather warning is also in place on Saturday, which could see heavy snow across parts of Scotland to central parts of England.