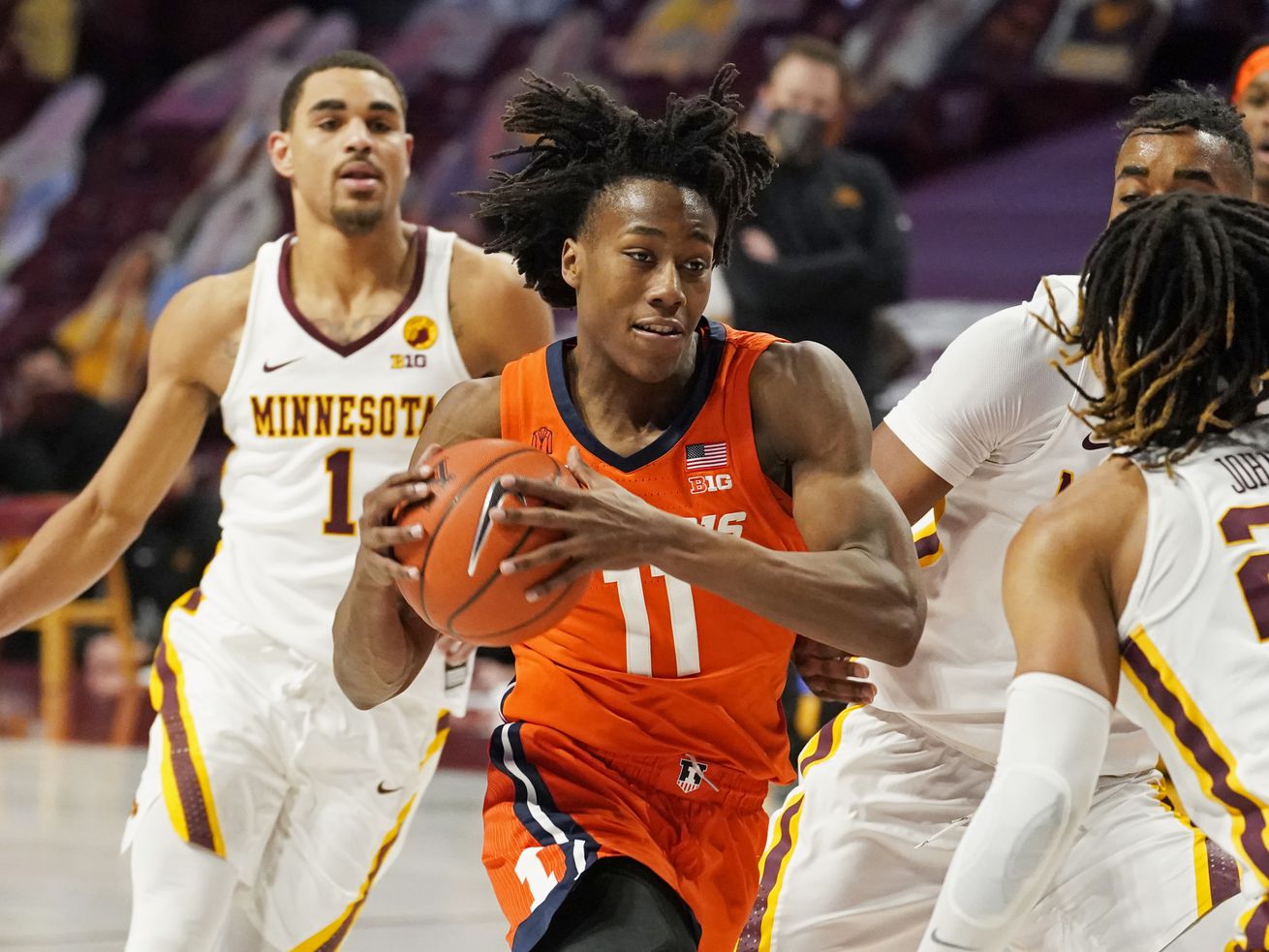 Ayo Dosunmu drives past Tre’ Williams (1) in the second half Saturday in Minneapolis. | Jim Mone/AP

Ayo Dosunmu had 19 points, 10 rebounds and 10 assists for his second triple-double of the season, Kofi Cockburn scored 22 points in 24 minutes and the Illini crushed the Gophers 94-63.

MINNEAPOLIS — Ayo Dosunmu had 19 points, 10 rebounds and 10 assists for his second triple-double of the season, Kofi Cockburn scored 22 points in 24 minutes, and No. 5 Illinois cruised past Minnesota 94-63 Saturday for its seventh consecutive victory.

Freshman Jamal Mashburn Jr. led Minnesota with 16 points and six rebounds, with his father, former NBA player Jamal Mashburn, watching in person for the first time in his college career.

From warmup drills though the pickup-game-like vibe that developed during the second half, Illinois filled the mostly empty arena with chants and cheers, a relentless and fun energy that the Gophers never matched. Whether a thunderous one-handed dunk by the 7-foot, 285-pound Cockburn or a slick lob pass from Dosunmu to Giorgi Bezhanishvili for a slam, the Illini had a lot to smile about.

The best-shooting team in the Big Ten didn’t miss a beat, heading into halftime on a 29-14 run to break a tie midway through the first half as the Gophers grew more flustered with the ball. When Marcus Carr wasn’t ready for a pass around the perimeter by Tre’ Williams in the closing seconds, Frazier intercepted it and flung a half-court shot that swished at the buzzer for a 48-33 lead.

On the first play of the second half, Cockburn rebounded a missed 3-pointer in front of fellow 7-footer Liam Robbins and dunked it with no resistance.

Robbins, playing through a sprained ankle, had four blocks and four assists but went scoreless in 13 minutes. The Gophers were also missing Gabe Kalscheur, their best defender and third-leading scorer, because of a broken finger on his shooting hand. Carr and Brandon Johnson each had 12 points and Williams scored 11 points for Minnesota, which has lost six of its last eight games.

Illinois: With their seventh “Quad 1” win, as defined by the NCAA’s formula for strength of schedule, the Illini matched Gonzaga for the second-most in the country. They’re coming in hot for a No. 1 seed, with five road wins in a row and their best Big Ten record since 2005.

Minnesota: Despite wins over Iowa, Ohio State and Michigan — three of the top four teams in the Big Ten and all ranked in the top 11 of the latest AP poll — the Gophers are nowhere near a lock for the NCAA Tournament. Winning their last four regular season games might be necessary to get in.

Why COVID-19 vaccines could make us mask-free and huggable