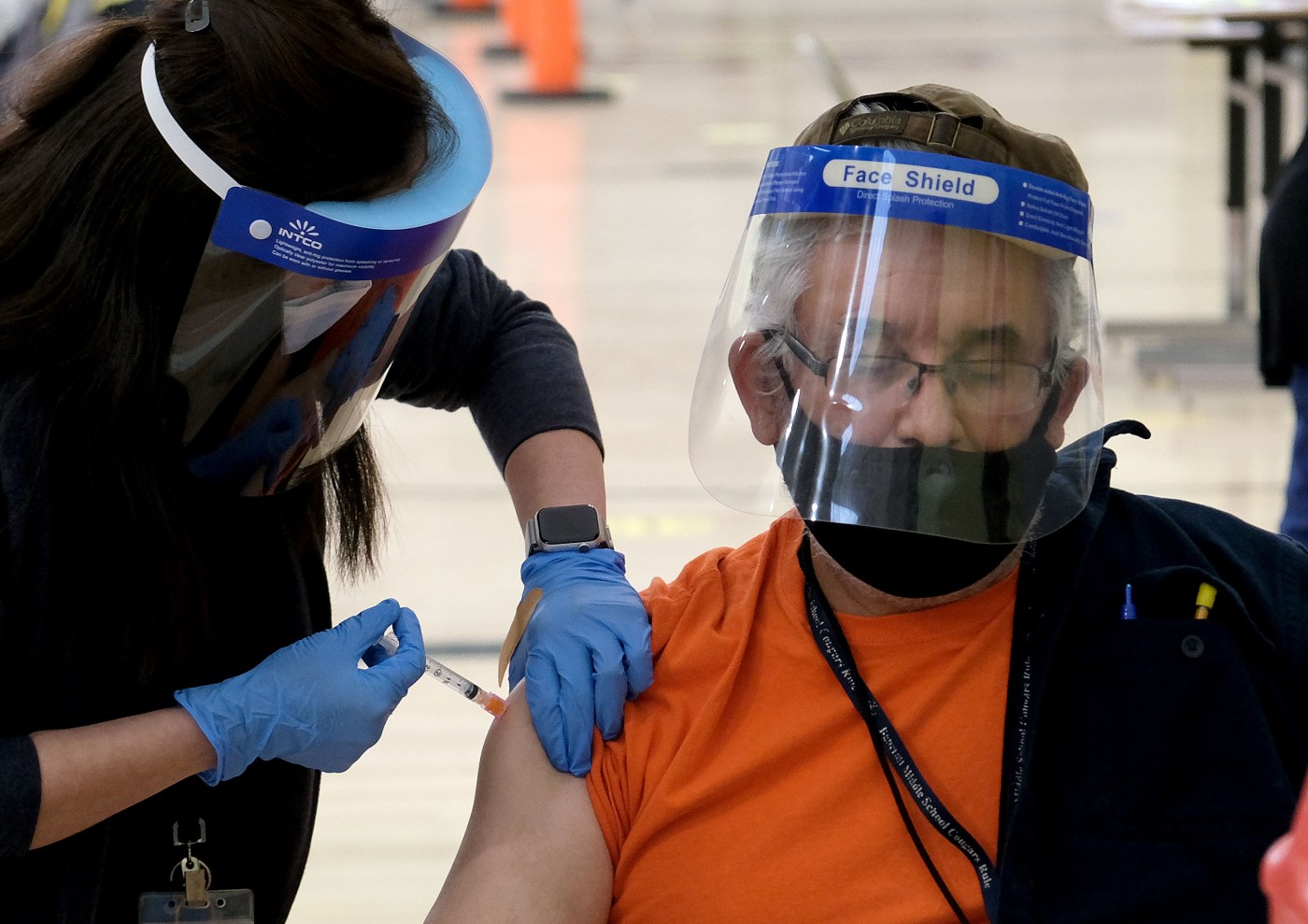 Just before Gov. Gavin Newsom was set to arrive to tour mobile vaccination sites in Los Angeles, county public health officials reported 1,465 new cases of COVID-19 and 93 additional deaths on Sunday, Feb. 21, with officials noting that the relatively lower number of cases and deaths may reflect reporting delays over the weekend.

Sunday’s numbers bring the county’s totals to 1,180,485 infections and 19,885 deaths since the pandemic began. The number of coronavirus cases in county hospital dropped to 2,213, according to the state dashboard, with 30% of those patients in intensive care. Hospitalizations have been dropping steadily since peaking at more than 8,000 in early January.

Newsom announced that he would visit two mobile vaccination sites in Los Angeles on Sunday afternoon. Ironically, Los Angeles’ large-scale city-run vaccination sites — including the sprawling clinic at Dodger Stadium and the newest complex at Pierce College — remain closed, with all appointments rescheduled due to the supply delays.

“Once the City confirms the arrival of a new shipment of doses in the days ahead, all patients who missed their appointment will be prioritized and receive a notification with details of their new automatically rescheduled appointment,” city officials posted on Friday.

However, the city’s mobile vaccination efforts continue as planned, and county officials say their sites have not been affected by weather-related issues and will remain open as scheduled. During his visits on Sunday, the governor aims to highlight the state’s efforts to vaccinate hard-to-reach and disproportionately affected communities, as equity issues in the distribution of the shots continues to vex health officials.

Vaccination rates among eligible Black residents lag far behind other ethnic groups, according to data released Friday by the Los Angeles County Department of Public Health. Black residents represented just 5.2% of all people who had received at least one dose of COVID-19 vaccine as of mid-February, while 33.5% were white, 23.1% Latino/a and 19.1% Asian.

Only 24% of Black residents aged 65 and older have received at least one dose of the vaccine, compared to 42.8% of white residents 65 and up.

During a virtual briefing Friday, Dr. Paul Simon, the county health department’s chief science officer, said the county is planning a number of steps to address the inequities, such as prioritizing the establishment of more vaccination sites in areas with the lowest rates, expanding mobile vaccination services to serve older residents and people with limited ability to travel to vaccine sites.

The county is also reserving doses so they can be administered in under-served communities, with 6,000 to 7,000 doses expected to be reserved next week for South Los Angeles and 1,000 to 2,000 in the Antelope Valley, he said.

Simon said there are still issues with vaccine supply, although sites operated by the county were largely spared from the weather-related delivery problems that forced the L.A. city vaccination sites to close last week.

The county sites are administering only second doses of the two-dose regimen for people who have already received a first shot.

Haunted by unfounded fears for their fertility, British Indians are more likely to resist getting COVID-19 vaccine

Top 10 programming languages companies are hiring for in 2021, according to coding bootcamp Coding Dojo