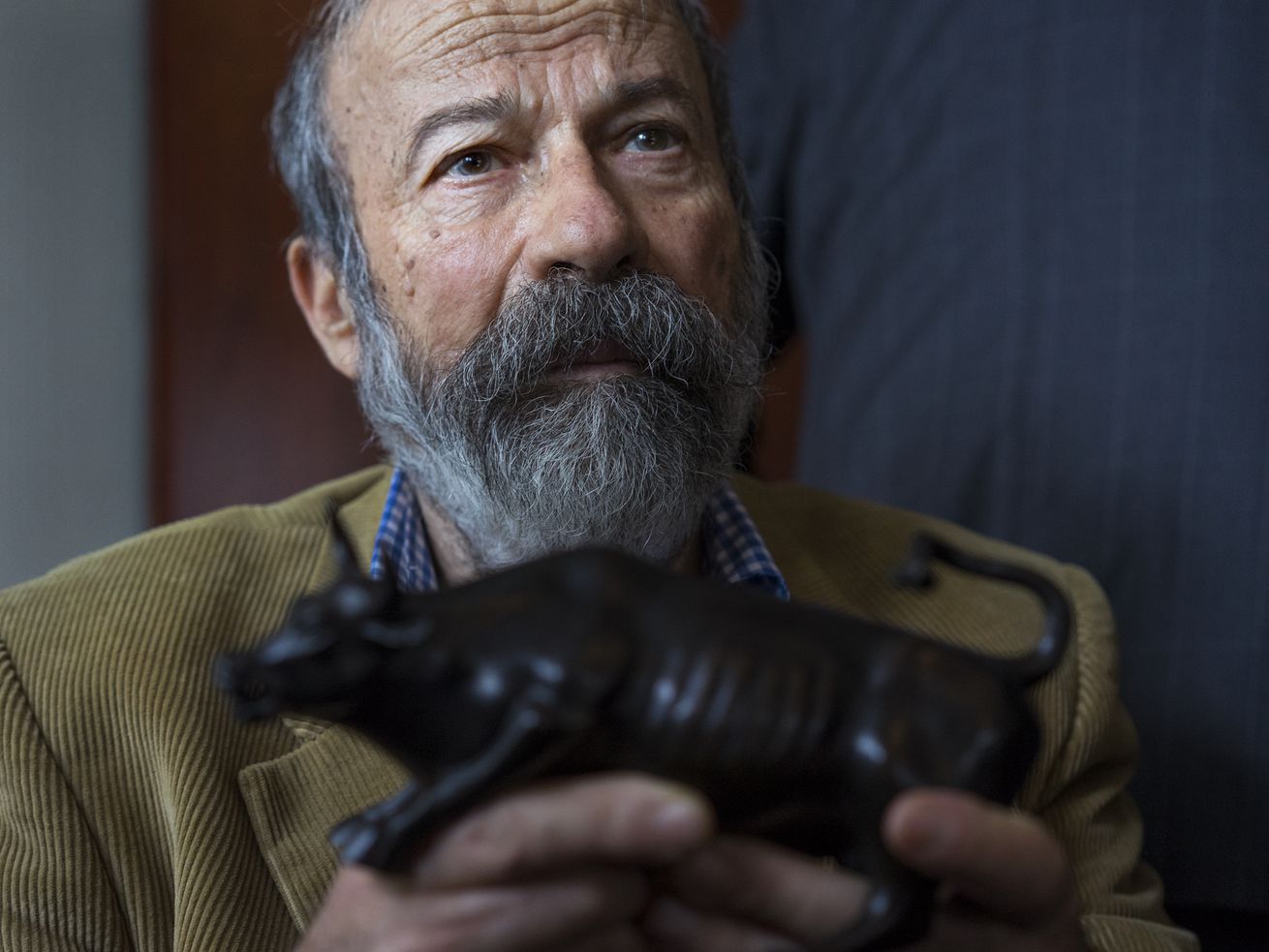 Arturo Di Modica holds a model of his Charging Bull sculpture during a news conference in New York in 2017. Di Modica, the artist who sculpted the bronze bull statue in New York, an iconic symbol of Wall Street, has died in his native Sicily.  | AP

With the help of a truck and crane, Di Modica installed the bronze bull sculpture in New York’s financial district without permission on the night of Dec. 16, 1989.

ROME — The artist who sculpted Charging Bull, the bronze statue in New York which became an iconic symbol of Wall Street, has died in his hometown in Sicily at age 80.

Arturo Di Modica died at his home in Vittoria on Friday evening, the town said in a statement on Saturday. Di Modica had been ill for some time, it said.

The sculptor lived in New York for more than 40 years in New York. He arrived in 1973 and opened an art studio in the city’s SoHo neighborhood. With the help of a truck and crane, Di Modica installed the bronze bull sculpture in New York’s financial district without permission on the night of Dec. 16, 1989.

The artist reportedly spent $350,000 of his own money to create the 3.5-ton bronze beast that came to symbolize the resilience of the U.S. economy after a 1987 stock market crash.

“It was a period of crisis. The New York Stock Exchange lost in one night more than 20%, and so many people were plunged into the blackest of depressions,” Rome daily La Repubblica quoted Di Modica as saying in an interview earlier this month.

“The layup was there”: Inside the Nuggets’ late-game disaster vs. the Wizards

He said he conceived of the bull sculpture as “a joke, a provocation. Instead, it became a cursedly serious thing,” destined to be one of New York’s more visited monuments.

In the La Repubblica interview, Di Modica detailed how he, some 40 friends, a crane and a truck carried out a lightning-swift operation to plant the statue near Bowling Green park, a short stroll from the headquarters of the New York Stock Exchange, without official authorization.

“Five minutes. The operations shouldn’t have lasted more. Otherwise, we’d risk big,” he recalled. “After a couple of scouting trips, I had discovered that at night, the police made its rounds on Wall Street every 7-8 minutes.”

When the sculptor and his friends arrived at the spot he’d picked, they were surprised to see a Christmas tree had been erected there. They deposited the bronze bull anyway, and, as the artist told it, uncorked a bottle of Champagne.

Di Modica left Vittoria, Sicily, at age 19 for Florence, where he studied at the Fine Arts Academy.

At the time of his death, he was working on prototypes for a twin horse sculpture he planned to make for the Sicilian town. It was envisioned as a 40-meter-high (132-foot-high) work to be erected on the banks of a river.

Hundreds of snowmen make a case in Utah for climate change

Snapchat’s flashy TikTok rival has lured creators with direct payments but has banned sponsored posts, which are a key element of the influencer industry

Menu Planner: Delight your family with skillet shrimp with tomatoes and feta