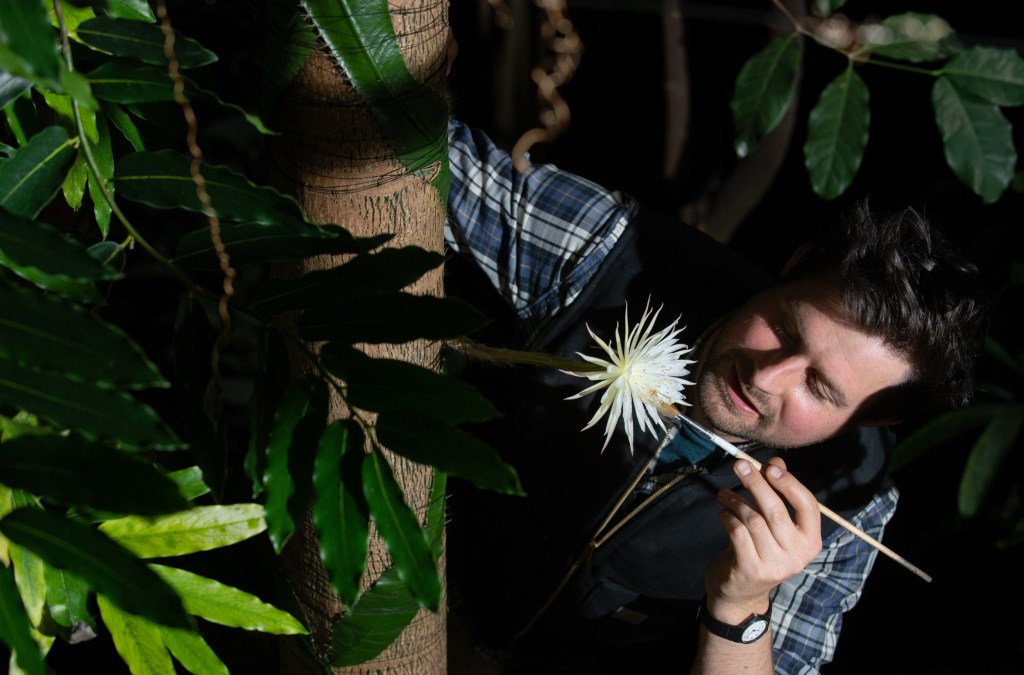 A super-rare Amazonian cactus has flowered for what experts believe is the first time ever in the UK – but it has already started to wither.

The tropical Moonflower, or Selenicereus wittii, is usually exclusive to the floodplain rainforests of the Amazon Basin in South America.

However, Cambridge University Botanical Gardens (CUBG) has been home to one of these rare and exotic cactus plants since 2015.

Yesterday, for the first time, it flowered after a bud grew from the bizarre-looking plant.

But it happens just once, and only for around 12 hours, and it has already started to close up again.

It was thought the plant would blossom at night, but a garden spokesperson said it appeared it was a ‘sun lover’.

The rare cactus, called the Moonflower, at Cambridge University’s Botanic Garden as it blossoms for what botanists believe is the first time in the UK (Credits: PA)

Thousands of people from around the world have been eagerly awaiting its bloom via a YouTube livestream.

A spokesperson for the gardens said: ‘It appears that our moonflower is a bit of a sunlover and it has started opening during the day, just to keep us all on our toes!

The strange-looking bud measures an impressive 27cm and is covered with tufts of ‘hair’ whilst closed.

Experts kept a night watch throughout the week so that they did not miss the flowering of Selenicereus wittii (Credits: PA)

It appears as if it is growing straight out of the trunk of another tree in the CUBG Tropical Glasshouse, but in reality, the Moonflower is an epiphyte – meaning it relies on another plant as an anchor point.

At CUBG, the cactus’ strange, flattened, leaf-like stem has wound its way around a Water Chestnut tree.

Alex Summers, Glasshouse Supervisor at CUBG, who is responsible for growing and nurturing the Moonflower, said: ‘I noticed the flattened stems, or pads, which swirl around the trunk of our Water Chestnut had sent out a flowerbud in late November.

‘This was a lucky spot as it’s almost 12 feet up in the air and could have so easily been missed.’

This sweet smell attracts the night-flying hawkmoth – which is believed to be the only insect able to pollinate the Moonflower, due to their extremely long tongues.

Two hours after flowering begins, the plant changes its scent to something far less pleasant, and the flowering is usually over by sunrise.

Alex is planning to hand-pollinate it, with the hope of producing seed.

MORE : Rusting oil tanker could create one of the worst environmental disasters in history

MORE : How washing up can damage the environment – and how to lessen its impact

What time will Boris Johnson unveil his roadmap out of lockdown?