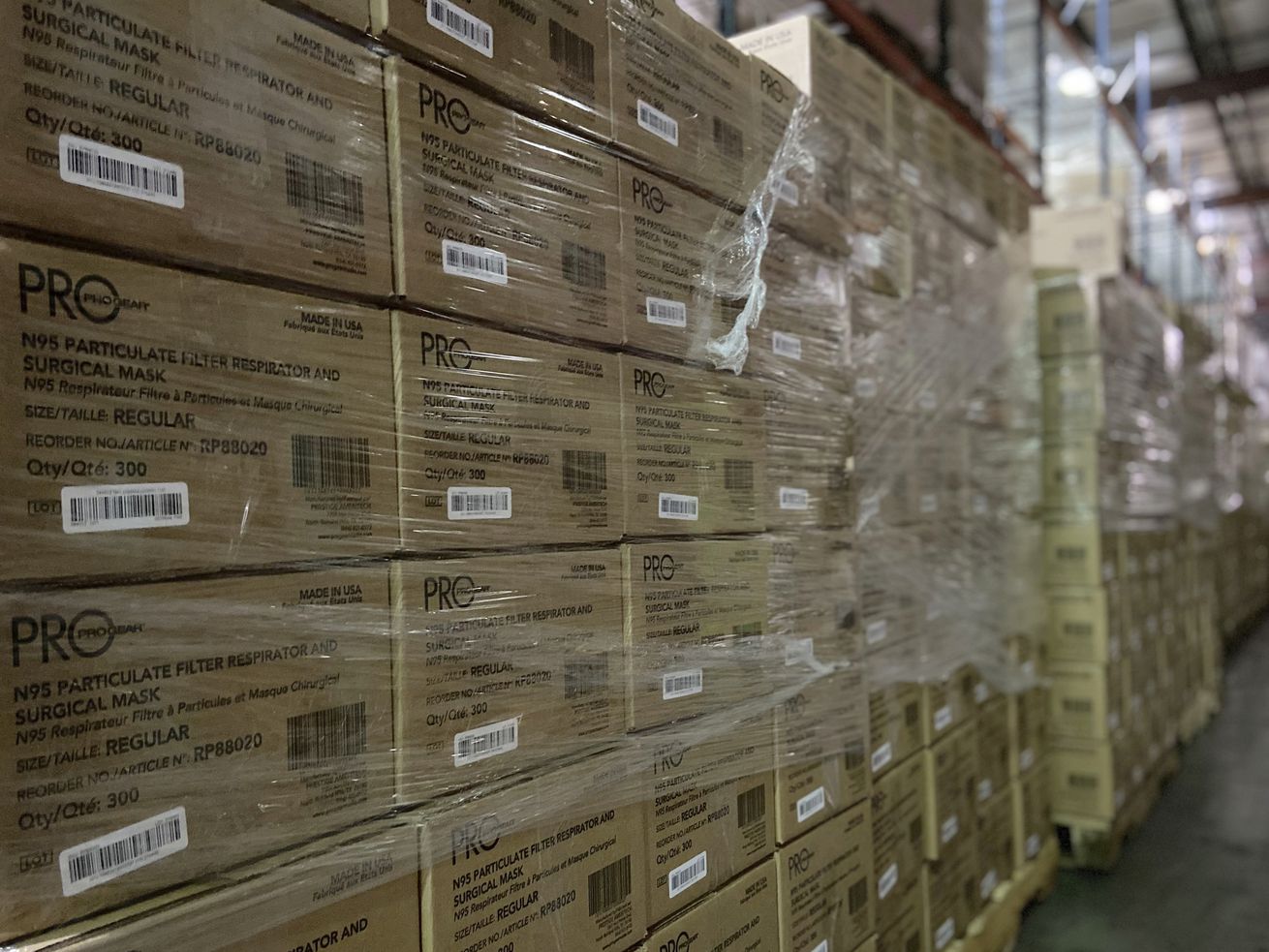 This photo from earlier this month provided by Prestige Ameritech shows boxes of the company’s N95 masks in warehouse storage at North Richland Hills, Texas, outside of Fort Worth. One year into the COVID-19 pandemic, the U.S. finds itself with many millions of N95 masks pouring out of American factories and heading into storage. Yet there still aren’t nearly enough in ICU rooms and hospitals | Provided

The Federal Emergency Management Agency issued a waiver, allowing a Texas company to export its products after it failed to secure U.S. customers, records show.

In the final moments of Donald Trump’s presidency, amidst a national shortage of N95 masks, the U.S. government granted an exception to its export ban on protective gear, allowing as many as 5 million of the masks a month to be shipped overseas.

The Federal Emergency Management Agency issued the waiver, allowing a Texas company to export its products after it failed to secure U.S. customers, according to the FEMA letter obtained by KHN.

National Nurses United president Zenei Triunfo-Cortez called the export waiver “unconscionable” and said N95 masks remain under lock and key in many hospitals. She said she still has to “beg” for a new one if hers gets soiled during a shift caring for coronavirus patients.

Health care employers “and a federal agency that is supposed to be protecting the people of America are not doing their jobs,” Triunfo-Cortez said. “They have no regard for our safety.”

The disconnect between frontline workers going without better protection and federal officials suddenly exporting masks boils down to one thing, workplace-safety experts say: The government has not pivoted quickly enough to lift supply chain crisis-mode guidelines and force employers to take costly and sometimes cumbersome steps to better protect workers with top-quality gear.

Coronavirus: California’s February death toll already exceeds all but one past month

The FEMA letter refers to the challenge that Fort Worth, Texas-based Prestige Ameritech faced in finding customers for its government-approved, high-end respirators: Hospitals did not want to “fit test” employees to its N-95s, a 15-minute-per-employee process to ensure that a new N95 model seals to the face, according to company president Mike Bowen.

Getty Images
Mike Bowen, president of mask manufacturer Prestige Ameritech, testifying last May before the House Energy and Commerce Subcommittee on Health on the response to the COVID-19 pandemic.

Bowen said he ramped up N95 production during the pandemic from 75,000 to 9.6 million a month. Lately, he said, he can’t sell them to major buyers, does not have the infrastructure to sell them to small buyers and has so many in storage that he might need to lay off workers and wind down production.

The FEMA letter refers to those challenges and says the waiver was granted in the “national defense interest” to ensure that Bowen keeps production running at the same pace. The letter was transmitted to Border Patrol officials who oversee exports 103 minutes before Joe Biden was sworn into office.

Yet even with the waiver, Bowen said, he hasn’t been able to find an overseas buyer. He said he can’t understand …read more

Who Is ‘Bloodlands’ Goliath? Theories About His Identity Are Already Circulating