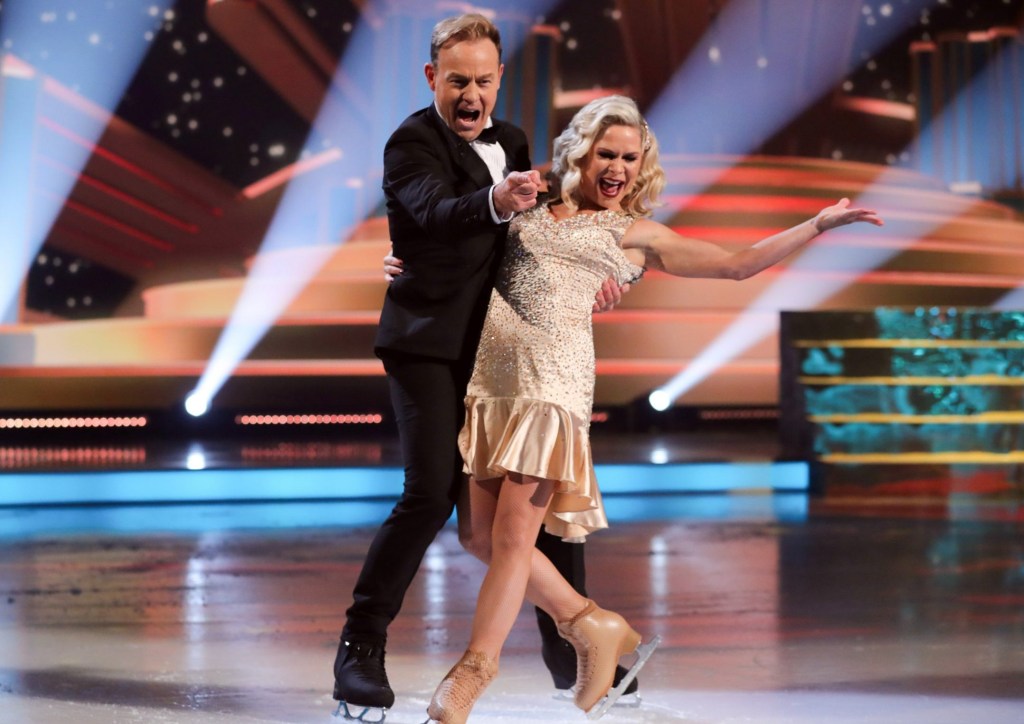 Alex has spoken out after partner Jason was injured on the ice (Picture: Rex)

Jason Donovan’s Dancing On Ice partner Alex Schauman has paid tribute to their time skating together after injury forced the couple to withdraw.

Jason and Alex became the fifth pair to be eliminated early from this year’s competition after Jason injured his back and was unable to recover to return to the ice in time.

His exit was confirmed on Monday evening, with Jason explaining what happened via Facebook.

Alex, who won in 2019 with Strictly star James Jordan, said she was ‘beyond gutted’ their time on the show had come to an end, sharing snaps of her and Jason together in practice.

Alongside the photo collection, she wrote: ‘Finding it hard to find the right words right now…

‘What a true honor and privilege to have been partnered with [Jason] on this series of [Dancing On Ice].

‘To say that I was starstruck when we first met would be an understatement even though I played it cool and I think he didn’t notice. Told him later though.’

‘Beyond gutted that our time on the ice together has come to such an abrupt end when I feel like we had so much more to show you all,’ she continued.

‘But as always, thank you so much for all your love and support, couldn’t have done it without you and a huge thank you to everyone involved with the production of this fantastic show.

Lana Condor's Boyfriend Edited Himself Into 'To All The Boys 3'

‘It has been a tough year but I will always treasure these months on the ice knowing that we hopefully have brought some magic into people’s living rooms on Sunday night!

‘I will continue to cheer everyone on and wishing my wonderful partner in crime a speedy recovery.’

She ended with their motto: ‘No risk-no magic’.

In Jason’s announcement video, the Australian said: ‘I am devastated to announce that due to this ongoing back issue that occurred on Dancing on Ice about 10 days ago, and at the advice of my medical team in the show, unfortunately I can’t continue in the competition and therefore have to withdraw.

He ended with a tribute to Alex, saying: ‘She’s believed in me when at times I didn’t even believe in myself.’

Jason is the third celebrity to withdraw due to injury, with Denise Van Outen dislocating her shoulder, and Billie Faiers getting a concussion after bashing her …read more

Wesley Snipes Is Back In ‘Coming 2 America’ And He’s About To Pop, Baby!

Why Republicans Are Pushing Back Against Xavier Becerra’s Confirmation