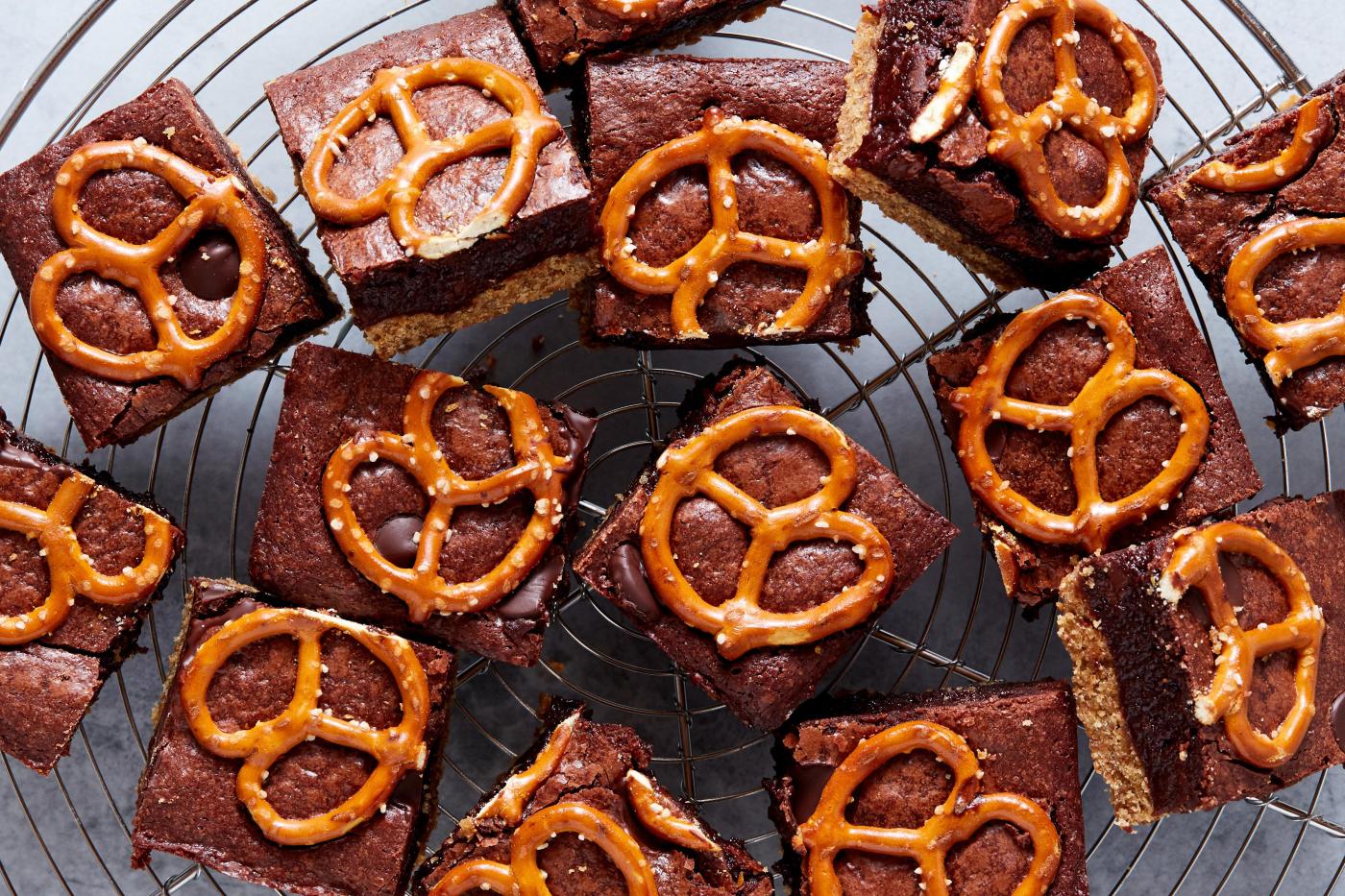 In the vast and varied world of brownie recipes, there are the minimalist versions: pure expressions without nuts, chips or icing nigh. Then, there are the maximalist takes, stuffed to their fudgy edges with all manner of sugary excess.

To be sure, my grown-up instincts appreciate the nuances of the more understated iterations. But the rest of my pandemic-weary soul cries out for indulgence: Make mine as gooey, chewy and opulently embellished as they can be.

And so, I developed these brownie recipes to satisfy the depths of my chocolaty desire, in three distinct ways: salted, nutty and candy bar inspired.

The salted pretzel brownies are the most restrained of the lot, built on the technique of sprinkling a little flaky salt at the end to make brownies’ bittersweet nature pop. Here, salty pretzels work in a similar way, adding crunch and a toasty character alongside a saline zing. If you can, try to find small pretzels for the topping, which look particularly adorable all lined up like twisted hearts across the crackled brownie surface.

The love language of butter

Get Cooking: Gaining an understanding of legumes

Yes, that viral feta pasta dish really is worth the hype. Here’s how to do it justice.

Because a pretzel topping by itself wouldn’t qualify as truly maximalist (in my mind, at least), I’ve also tucked a graham cracker and crushed pretzel crust beneath the brownie batter, giving the bars cookielike appeal run through with salted caramel notes.

The inspiration for the next brownie variation began with the coconut heart of a Mounds bar. But as I experimented, I realized that the difference between a homemade Mounds bar filling and a classic coconut macaroon is mostly in the ratio of sweetened condensed milk to coconut flakes. For these brownies, I added just enough of the syrupy milk to bind the coconut, then plopped scoops of them in “mounds” on top of the batter. Part cookie, part candy, they are over the top in the very best way.

And finally, I crossed brownies with pecan pie to come up with my last recipe. The brownie part is at the base, a dense, fudgy replacement for the usual flaky crust. Then, the pecans and all their glorious, honeyed goo rest on top, baking up into a shiny, crunchy blanket that looks a lot more subtle than it tastes.

Subtlety, after all, is not the point of any of these confections, which are as exuberantly joyful as brownies can be, just when we need them the most.

‘Chicago P.D.’ star says the show, criticized as ‘copaganda,’ now is ‘trying to turn a page’

‘The Beast Must Die’: Jared Harris and Cush Jumbo Filmed AMC Series in a Bubble on Isle of Wight

Warriors’ Steph Curry out in Charlotte after ‘not feeling well’

Trump made $1.6 billion while president, according to financial disclosures, but left office less wealthy than before

Dogecoin’s $2 billion ‘whale’ might be Robinhood, according to Redditors