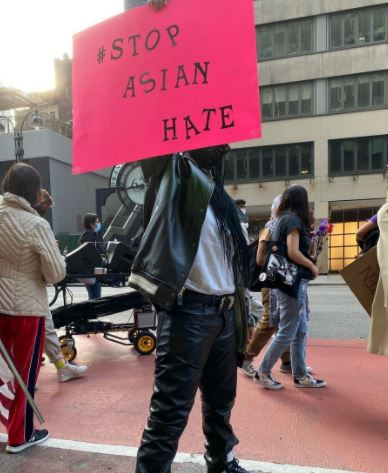 Rihanna was so good at going undercover at the Stop Asian Hate March that she surprised one fan who had no clue he was chatting to the superstar.

The Wild Thoughts singer stood in solidarity with the Asian-American community by joining her assistant Tina Truong at the anti-racism campaign on Sunday.

As the masses took to the streets of New York City, Rihanna was right in the thick of it and proudly waved a #StopAsianHate banner as she trekked through Manhattan.

At one point, the singer was seen dancing to music being played by a fellow campaigner and stopped to pose with her neon banner, which also said ‘Hate = Racism Against God.’

In one light-hearted moment, Rihanna stopped to talk to another protestor and when he asked for her Instagram handle, got the shock of his life when she put in @badgalriri, revealing her identity.

To be fair, it was probably a little tricky to get a good look at the singer’s recognisable face as she was wearing a face mask.

Rihanna’s assistant Tina shared footage of the hilarious moment the fan got the pleasant surprise and joked: ‘When Rih gives you her IG handle but you think she trolling,’ as the fan likely assumed it was simply a woman playing a prank on him.

‘That’s you?’ the man asked before the clip cuts.

'The Colour Room': Release Date, Cast, Plot & Everything We Know

Rihanna, 33, has been vocal about the Stop Asian Hate campaign since the horrific Atlanta shootings which left eight people dead, many of who were of Asian descent.

Speaking out against the attack, Rihanna tweeted: ‘What happened yesterday in Atlanta was brutal, tragic & is certainly not an isolated incident by any means.

The singer was in great spirits (Picture: @teacuptina, Instagram)

AAPI hate has been rampantly perpetuated & it’s disgusting! I’m heartbroken for the Asian community & my heart is with the loved ones of those we lost. The hate must stop.’

Rihanna is among the host of musicians who showed their support for the Asian-American community following the incident.

Janet Jackson tweeted at the time: ‘My heart breaks for the Asian community. Sending prayers to all affected by yesterday’s tragedy.’

Pharrell Williams said: ‘Enough is enough. Last night was another instance of innocent lives lost to domestic terrorism. We must protect our Asian brothers and sisters.

‘My thoughts and prayers are with the families who lost their wives, sisters, daughters to this senseless act of hatred. Stop Asian Hate now.’

Got a showbiz story?
If you’ve got a celebrity story, video or pictures get in touch with the Metro.co.uk entertainment team by emailing us celebtips@metro.co.uk, calling 020 …read more

GRAMMYS 2021: Watch Doja Cat’s ELECTRIFYING Say So Performance
Kim Kardashian to Addison Rae: Are You Having Sex With Kourtney?!

What Happened To Josh Hartnett? He Has New Movies Coming

Netflix to Partner with GRAMMY Museum to Present ‘Ma Rainey: Mother of the Blues’ Tribute

Matthew Perry posts first photo from Friends reunion (before deleting it) and could we be any more excited?

Who’s Peter On ‘A Million Little Things’? Sophie May Be Mixed Up In Something