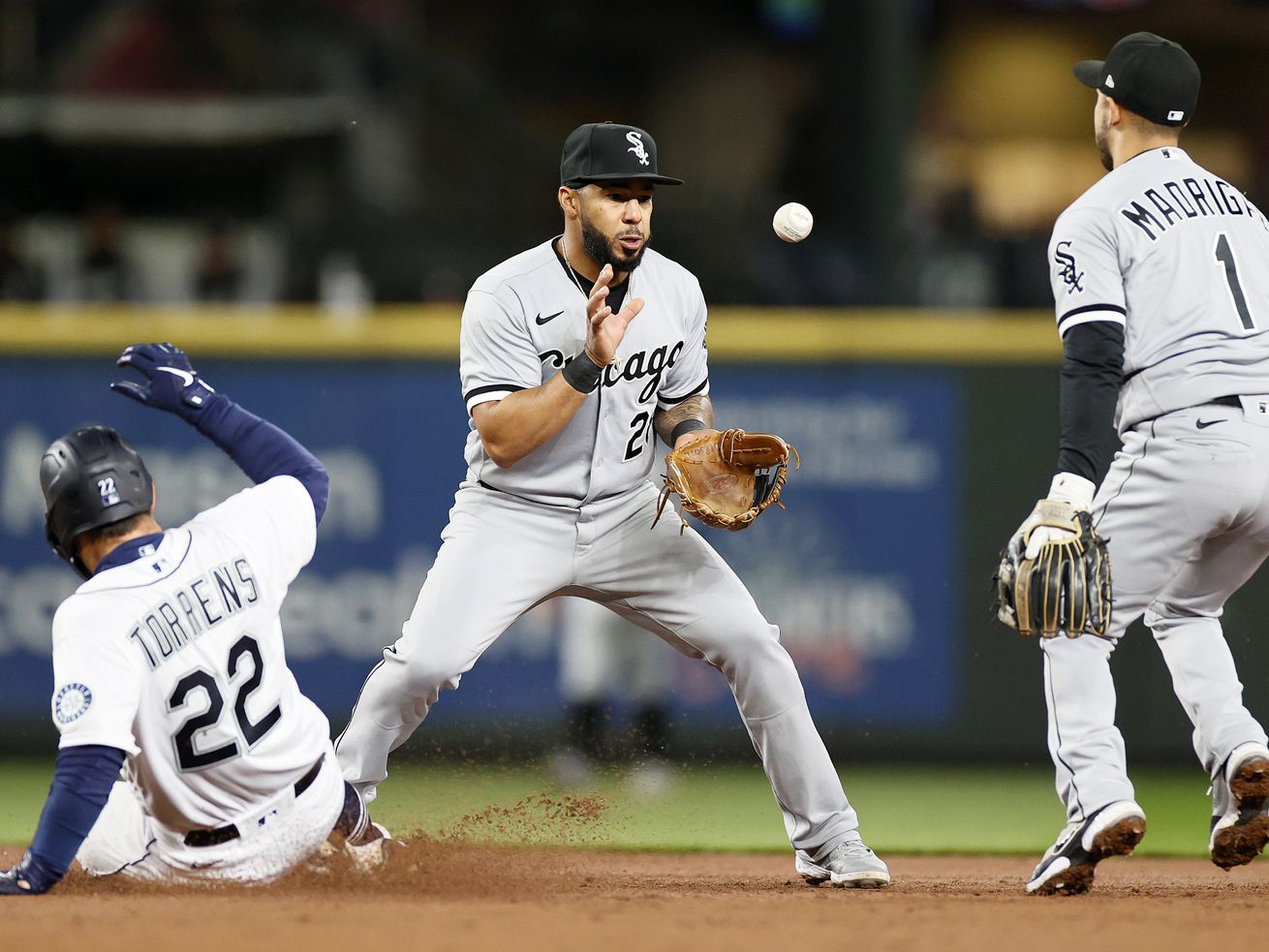 Lucas Giolito was cruising through his first two innings, striking out five Mariners in a row after a leadoff groundout. And then the White Sox defense happened.

Lucas Giolito was cruising through his first two innings, striking out five Mariners in a row after a leadoff groundout. And then the White Sox defense happened.

In one calamitous third inning in a late game against the Mariners Tuesday in Seattle, second baseman Nick Madrigal bobbled a double play ball and had to settle for a fumbling force out, left fielder Andrew Vaughn had fly ball glance off his glove for an RBI double and catcher Zack Collins didn’t get his glove down to block a strikeout pitch in the dirt, allowing a run to score.

All of which forced Giolito, working with fastball velocity in the low 90s — a few mph lower than usual — to labor through a 39-pitch inning. The Mariners plated three runs.

When Collins belted a three-run homer against left-hander Nick Margevicius in the second inning to give Giolito a 3-0 lead and Giolito breezing early it had the makings of an easy night for the Sox, especially with Mariners lefty starter James Paxton forced to leave in the second with an injury.

But things got dicey after that. It was the latest bad showing with the gloves for the Sox, who made five errors worth seven unearned runs in their opening series against the Angels.

After going hitless in his first 12 appearances, Vaughn got his first major league hit, a double to right-center, in the fourth.

Luis Robert’s two-run homer in the fifth gave the Sox a 5-3 lead, and Giolito rebounded from the ugly third with two scoreless innings. He had nine strikeouts through five innings.

Poll: 15% of Americans worse off a year into pandemic

As expected, shortstop Tim Anderson was out of the starting lineup for a second consecutive night with a tight left hamstring, and he won’t play in the series finale Wednesday afternoon. Manager Tony La Russa said “we’ll wait and see about the home opener” Thursday against the Royals.

Anderson went through running drills before the game.

“So I think he’s making progress,” La Russa said. “But I don’t know exactly what the timetable is.”

A night after belting a homer and driving in three runs, switch-hitting catcher Yasmani Grandal was on the bench with left-handed hitting Collins catching Giolito. Grandal will catch the series finale Wednesday afternoon and also on Thursday, La Russa said.

Grandal dealt with a sore right knee during spring training, and not wanting to tax him even as a designated hitter and with Yermin Mercedes batting .667, La Russa relieved Grandal of DH duty, too.

“But more it’s about wanting to get a game off for Yaz and being confident that Lucas and Zack could work together well.”

Rodon, the No. 5 starter, struck out nine in five innings, and Michael Kopech (five strikeouts) and Jose Ruiz (one strikeout) each threw two …read more

Harriette Cole: My daughter is about to repeat my big mistake