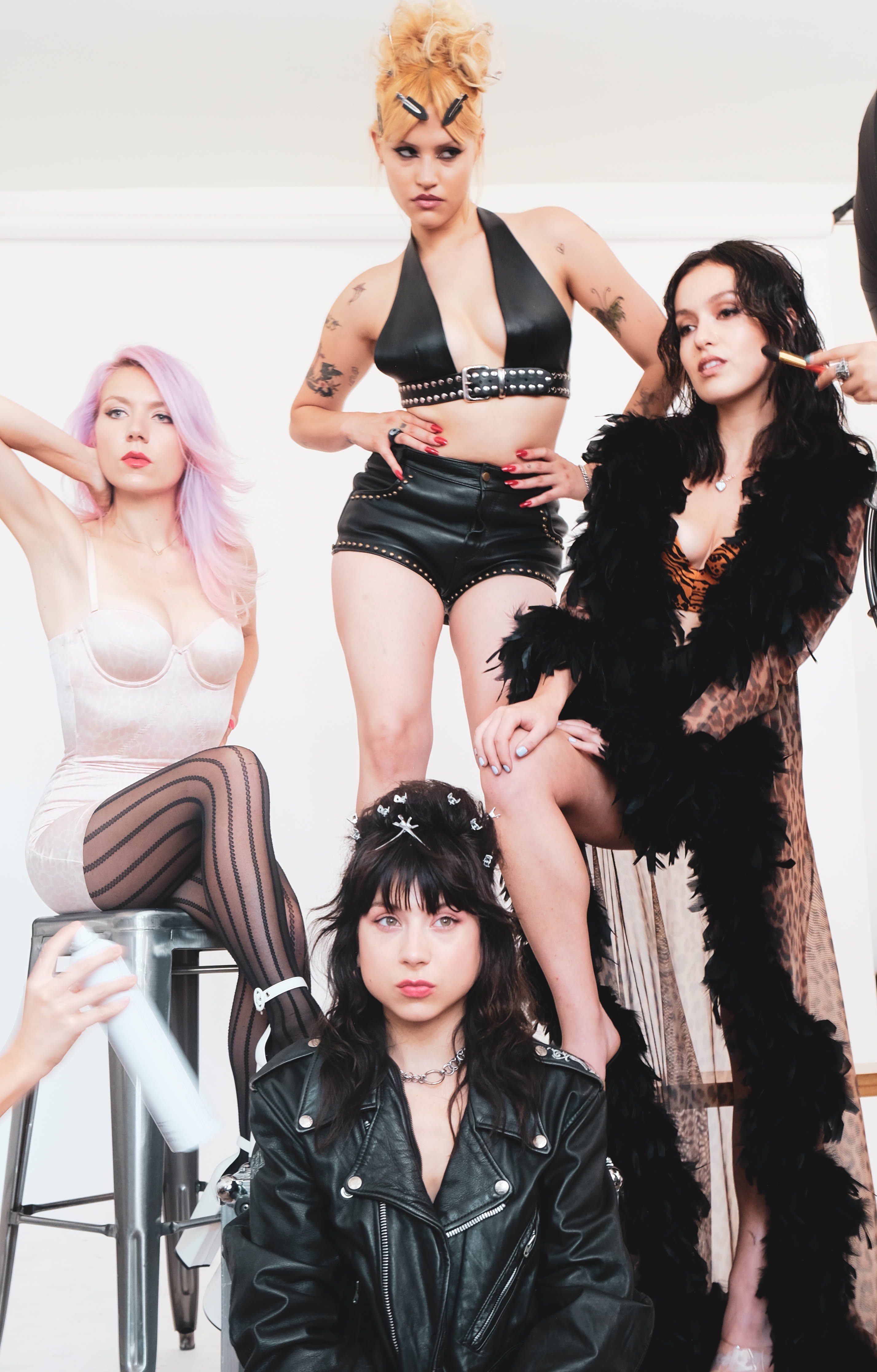 “Like a 10% on Rotten Tomatoes, but you love it”: that’s how the members of alt-pop band Nasty Cherry describe the film they’d produce and star in. Think action-packed, cult-classic B movies, like the Sylvester Stallone-led Cobra or the Delinquent Girl Boss series, says bassist Georgia Somary. “It would be crazy, but then with musical interludes. Very low-budget, but high-budget — if you can imagine,” she explains. Lead vocalist Gabbriette Bechtel pictures it styled like Jawbreaker, with many “little mini skirts,” and both members agree that Quentin Tarantino would be the best fit to direct it. “If he was available,” says Somary. “He will be available!” Bechtel retorts.

Nasty Cherry’s Somary, Bechtel, drummer Debbie Knox-Hewson, and guitarist Chloe Chaidez aren’t making a movie, (though they’d really, really like to, “if you know anyone who would like to give us some money,” notes Bechtel), but they did seriously consider the idea while creating their latest EP, aptly titled Nasty Cherry: The Movie. “We’re a band that should always be on a big screen,” Somary says with a smirk. “It’s just us trolling, but there was a vision.”

The big screen would be a natural next step, considering they’ve already conquered the small screen. Two years ago, Nasty Cherry introduced fans to their sassy, bombastic, guitar-led sound with debut EP Season 1, released alongside Netflix’s I’m With The Band: Nasty Cherry, a docuseries that chronicled the band’s unconventional formation. A mix of established and amateur musicians, each member was hand-picked to join the group by singer, songwriter, and hyperpop auteur Charli XCX, who knew them all from previous creative collaborations: Somary and Bechtel had appeared in some of her music videos (including “Take My Hand” and “After the Afterparty,” respectively), Knox-Hewson had toured as her drummer, and Chaidez’s other band Kitten once served as her opening act. Thinking they’d make a great band, XCX introduced them and subsequently signed their new group to her label, Vroom Vroom Recordings.

On I’m With The Band, the quartet’s inaugural studio sessions, live rehearsals, business meetings, and life together in an LA home were all documented in HD for the world to see — as were their disagreements, mistakes, and vulnerable moments. According to Knox-Hewson, “It was like an X Factor audition all the time.” Bechtel muses, “I still look back, and I actually can’t believe all of us did that, going into a house where we knew nobody.”

Thanks to the series and XCX’s co-sign, Nasty Cherry amassed a sizable fanbase and embarked on a club tour that spanned North America and Europe, which allowed the band to meet their listeners face-to-face for the first time. But after the onset of the COVID-19 pandemic, the tour was cut short, and the bandmates returned to their respective homes — Knox-Hewson to the UK and Bechtel and Chaidez to LA — except for Somary, who hails from Britain but opted to settle in LA. (“I just broke up with …read more

Grimes unveils huge ‘beautiful alien scars’ back tattoo and it really is out of this world: ‘It hurts too much’