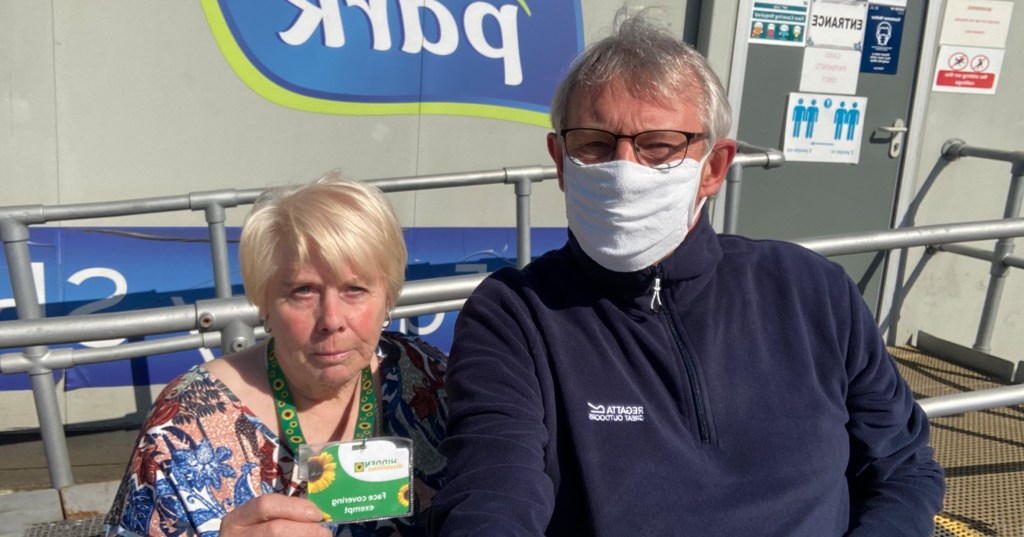 Veronica Anthony and her friend Alan Watts were ‘ushered’ out of the store despite Ms Anthony having a badge to say she is exempt from wearing a mask (Picture: Derbyshire Live/BPM MEDIA)

An elderly woman who cannot wear a mask because she has breathing difficulties was kicked out of a store for not covering her face.

Veronica Anthony, 74, has a lung condition which causes shortness of breath called emphysema. Legally, she does not have to use a mask in shops or on public transport because wearing one makes it hard for her to breathe.

But, when she visited Moy Park factory shop in Ashbourne, Derbyshire, last week she was ‘ushered out’ despite wearing a badge that showed she was exempt.

She believes someone complained about her not wearing a mask because she did not encounter any problems when she first entered the store.

Ms Anthony said: ‘I tried to explain that I can’t wear a mask or a visor because of my emphysema, and I had my badge around my neck saying that I was exempt from wearing one.

‘But he [the manager] was having none of it and they ushered us out of the shop.

‘If I could wear a mask then I would want to because I know that if I get Covid I will probably die because I’ve been classed as clinically extremely vulnerable.

‘So, of course I want to protect myself but I just cannot breathe properly when I’m wearing a mask for a long period of time.

‘It left me really distressed because I don’t like causing problems but I just don’t know what gave them the right to do this.

‘I’ve had no problem displaying my badge anywhere else like this before either.’

Moy Park factory shop in Ashbourne, Derbyshire, has been in touch with Ms Anthony and offered her a voucher (Picture: Ella Millward)

Alan Watts, 59, who was with Ms Anthony to help her carry groceries home, thinks what the store did was ‘disgusting’.

He said:  ‘She was very shocked afterwards because it had caught her off guard. We had been before loads of times to this shop but on this occasion the manager was just insisting that we left.

‘She’s quite a strong person and at 74 she takes quite a lot of rumbling but this really has upset her.’

Moy Park has since been in touch with Ms Anthony  and offered a gift voucher to visit the store and discuss the incident.

‘I don’t want anything out of them, I just wanted to raise it because there are loads of people like me who are exempt from wearing masks and so I don’t want this to happen to other people,’ said Ms Anthony.

The store said: ‘We strive to provide our customers with excellent service, and we have been in touch with the customer to investigate.

‘We’re happy that this miscommunication has been resolved and we look forward to welcoming Veronica back to our shop again soon.’

Queen to open Buckingham Palace garden for picnics this summer

Harry Reid on former House Speaker John Boehner: ‘I did everything I could to cause him trouble’ but we ‘got a lot done’

Boy, 17, dies from stab wounds after being found lying on street