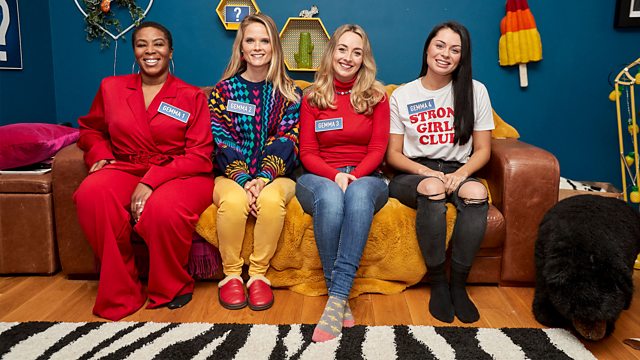 Will the real Gemma please stand up? Linda E pretended to be the homeowner from Surrey (Picture: BBC Pictures)

Stacey Dooley’s new reality series, This Is My House, has been hailed as everything from bonkers to barmy but, overall, highly entertaining.

Each episode follows four people who all claim to own the same house and be the same person. However, only one of them is telling the truth; the other three are actors.

It’s a pretty simple concept which makes it a wonder why it hasn’t been done before.

Last night’s episode featured radio presenter Linda E pretending to be homeowner Gemma, who lives in a technicolour house in Farnham, Surrey with her partner Pete.

Linda certainly has a bright personality but, was the bright house really hers?

‘I didn’t win but I was close,’ she told Metro.co.uk after narrowly missing out on being crowned the winner of the £1,000 prize money.

The panel on This Is My House, consisting of Bill Bailey, Emily Atack, Jimmy Carr, Judi Love and Jamali Maddix, have nothing to go on when judging the contestants except what they see at face value.

In other words, it’s all about appearances and, for the contestants, keeping them up.

Linda says: ‘The concept of it is so simple but it really does play on our preconceptions because we are literally looking at four people and judging whether or not we think they’d live in that house based on how they look, based on things they say.

‘I just love the idea that this show challenges ourselves to look at ourselves and what preconceptions we might already have.’

It’s all a bit of escapism really, especially as we count down the (hopefully) final days of lockdown.

Linda adds: ‘Whether or not it will have people looking at themselves and their own prejudices etc… I don’t know if the programme needs to do that for individuals because that’s an individual journey.

‘But the programme’s good at being entertaining, providing that escapism and making people question, why do I think this person wouldn’t own this house? It really plays with your mind.’

Taking part in a show where you have to keep up a lie requires a strategy beforehand.

‘My tactic was to root my life in truth,’ she explained.

‘It’s so random that where the location is, an ex-boyfriend of mine had gone to uni there. So I used that with my story when it comes to how I met my husband. In life, if someone says something to you and they say it with their chest, you’re gonna believe them. So that was my thing, whatever comes out their mouth, say it with confidence and hopefully these people would buy into that.’

Sometimes though, the lie can catch even the most quickest of thinkers out on the spot.

Recalling the hilarious moment she was asked for her children’s favourite teacher’s name, Linda admitted: ‘I …read more

The Always Pan Just Dropped In A Chic Terracotta Hue

How Does The Super-Soldier Serum Work, Again?

Clara Amfo ‘wouldn’t have coped that well’ in lockdown without working: ‘It’s been an absolute blessing’