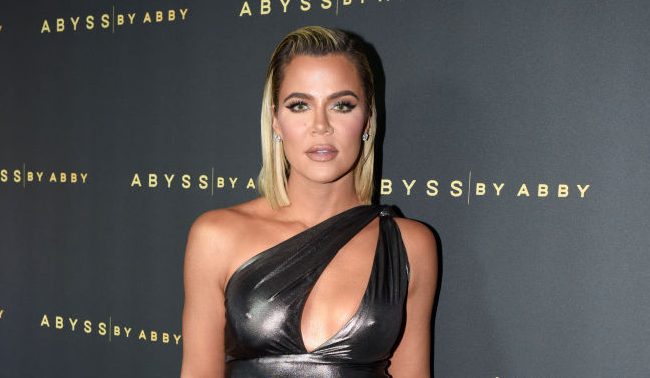 Khloe Kardashian has said ‘standards’ have been set for her by the public as she defended her attempt to have an unedited picture removed from the internet (Picture: Getty)

Khloe Kardashian has stripped off to defend her attempt to have an unedited bikini photo of herself removed from the internet after it went viral on social media and websites such as Reddit.

The TV star, posing for a topless video, opened up about ‘impossible standards’ that have been set for her as part of one of the most famous families on telly.

Taking to Instagram Live on Wednesday night, Khloe filmed herself taking off her jumper and lowering her baggy trousers to ‘show you all this isn’t photoshopped’.

In a powerful statement the 36-year-old said she has ‘every right’ to try and have the picture taken down as she has ‘struggled with body image my whole life’.

She revealed that she had been ‘conditioned to feel that I am not beautiful enough just being me.’

Her message was supported by sister Kim, who wrote in the comments: ‘I love you Khloe.’

Khloe said: ‘The photo that was posted this week is beautiful. But as someone who has struggled with body image her whole life, when someone takes a photo of you that isn’t flattering in bad lighting or doesn’t capture your body the way it is after working so hard to get it to this point – and then shares it to the world – you should have every right to ask for it to not be shared – regardless of who you are.

‘In truth, the pressure, constant ridicule and judgment my entire life to be perfect and to meet other’s standards of how I should look has been too much to bear.

‘”Khloe is the fat sister”. “Khloe is the ugly sister.” “Her dad must not be her real dad because she looks so different.” “The only way she could have lost that weight must have been from surgery.” Should I go on?

‘Oh but who cares how she feels because she grew up in a life of privilege. She’s also on a reality show so she signed up for all of this. I’m of course not asking for sympathy but I am asking to be acknowledged for being human.

‘I am not perfect but I promise you that I try everyday to live my life as honestly as possible and with empathy and kindness. It doesn’t mean that I have not made mistakes. But I’m not going to lie. It’s almost unbearable trying to live up to the impossible standards that the public have all set for me.’

The 36-year-old posted topless in a bathroom mirror (Picture: Instagram)
Khloe said she has been ‘conditioned …read more

Maladie From ‘The Nevers’ Is Based On A Real Serial Killer