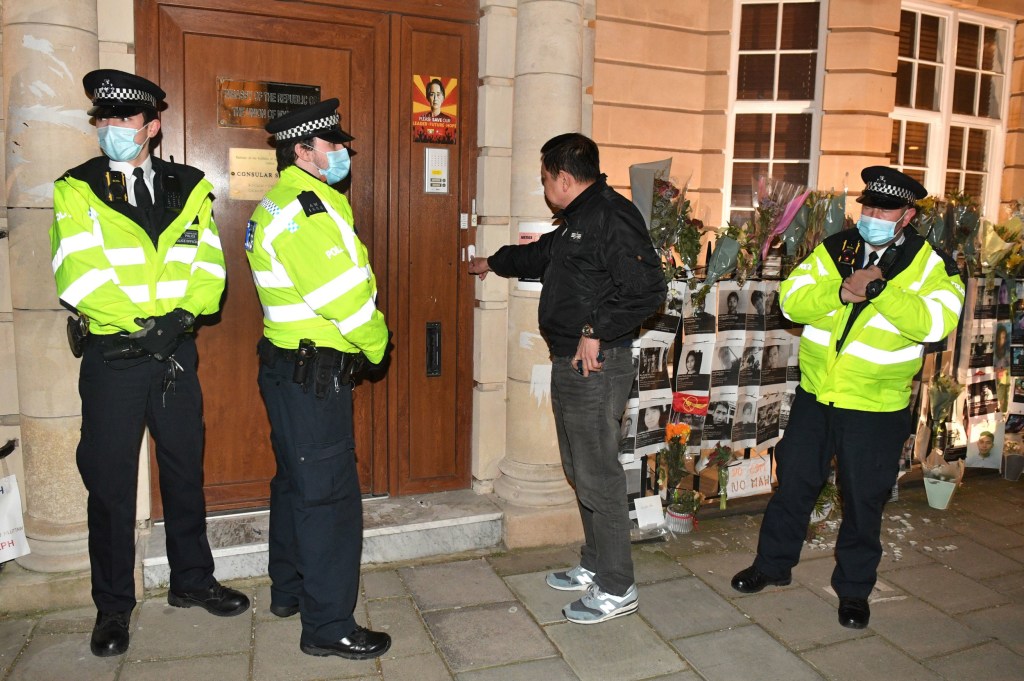 Myanmar’s London embassy was ‘stormed’ last night and seized by allies of the military, who locked out the ambassador to the UK.

Kyaw Zwar Minn, who was denied entry to the building on Charles Street in Mayfair, claimed there had been a ‘coup’ by the ‘Myanmar military’.

‘When I left the embassy, they stormed inside the embassy and took it,’ he told the Telegraph. ‘They are from the Myanmar military.

‘This a coup. This is the UK, we are not in Myanmar, in Burma. They are not able to do this. The British Government won’t allow this one, you’ll see that.’

The BBC reported last month that Kyaw Zwar Minn had been recalled by the South East Asian country after he spoke out against its recent military coup and called for the release of civilian leader Aung San Suu Kyi.

Photos taken outside the embassy on Wednesday night showed the ambassador getting out of a car that bore a large image of Ms Suu Kyi across its rear window.

Kyaw Zwar Minn, stands by a car with a poster of Aung San Suu Kyi (Picture: AFP)
The embassy building of Myanmar in central London (Picture: Getty)
The ambassador was barred from accessing the building (Picture: AFP)

Kyaw Zwar Minn was also captured ringing a doorbell as he unsuccessfully tried to enter the building, with a small number of police officers standing nearby.

Mr Raab tweeted: ‘We condemn the bullying actions of the Myanmar military regime in London yesterday, and I pay tribute to Kyaw Zwar Minn for his courage.

‘The UK continues to call for an end to the coup and the appalling violence, and a swift restoration of democracy.’

The Prime Minister has previously condemned the ousting of the elected government in Myanmar.

Myanmar’s military has since violently cracked down on opponents, with security forces reportedly killing hundreds of protesters and bystanders.

Foreign ministers from the G7 nations have also condemned the ‘intimidation and oppression’ of protesters following the coup.

On March 8, Mr Raab tweeted that he had spoken to Kyaw Zwar Minn and had ‘praised his courage and patriotism in standing up for what is right’.

He added: ‘We join his call for the immediate release of Aung San Suu Kyi and President Win Myint, and for a return to democratic rule.’

Tiger Woods ‘was speeding at 87mph in 45mph zone when he crashed,’ sheriff says

Ask Amy: This big shot was carrying on as if our lives hadn’t been upended