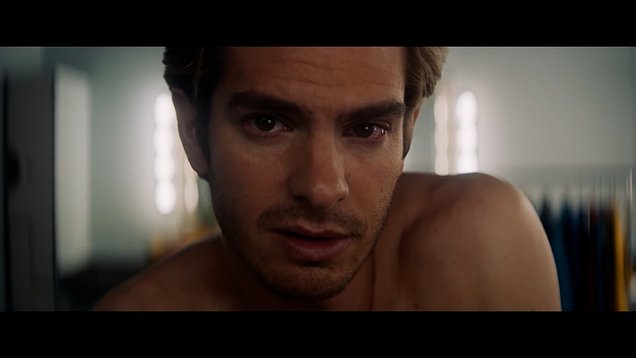 The trailer for Mainstream, a seemingly satirical look at the world of influencers and YouTubers, has dropped and the Andrew Garfield-starring film doesn’t look to be for the faint of heart.

Garfield plays Link, a man chasing fame, who has been described as the ‘grotesque lovechild of Val Kilmer’s Jim Morrison in The Doors and Joaquin Phoenix’s Joker’.

The film also stars Stranger Things’ Maya Hawke as Frankie, a barista in a sordid Hollywood club, working alongside pal Jake (played by Nat Wolff who stars in Palo Alto). Following a chance encounter with curious character Link – while dressed in a cockroach costume no less – the three start filming wacky adventures and encounters in the hopes of going viral.

They do, but clearly there is more to it as the synopsis reads: ‘In this cautionary tale, three people struggle to preserve their identities as they form an eccentric love triangle within the fast-moving internet age.’

It’s the second film from Gia Coppola (yes of the famous family, the granddaughter of Frances Ford Coppola and niece of Sofia Coppola) and had its premiere at the 2020 Venice Film Festival where Link was dubbed ‘a toweringly unpleasant viral star-on-the-rise’ by The Telegraph while The Hollywood Reporter cited ‘a sense of a certain dismayed hostility to the film’s prepubescent humor and plot’ from the press screening.

Indiewire dubbed the outing – which features Link running naked down Hollywood Boulevard, as well as a scene in which he threatens other online stars, including Jake Paul, with human excrement he deposited on a conference table – an ‘excruciating film’, which many may agree with upon seeing the trailer.

Paul’s appearance seems tongue in cheek as the film charts the addicting chase of likes and clout, with Link sporting bleach blonde hair not too dissimilar to the Team 10 founder, as he cruises around giant mansions on a hoverboard.

While the cameos are rich, the film seems to have been blasted by critics who have so far given the film a Rotten Tomatoes rating of 36%.

Still, the fans seems to be picking up what Link is putting down, as one reacted to the trailer by proclaiming Garfield as ‘stellar’.

‘I’ll watch it because Andrew Garfield looks like he’s gonna deliver his A game,’ another added, as one chimed in: ‘This trailer is a f**king masterpiece and I don’t care anymore if this movie is bad actually.’

17-story apartment building about to start construction at Belleview Station

Jefferies unveils 15 stocks to buy as China’s electric-vehicle sector is about to accelerate on favorable regulatory policies, consumer adoption, and tech partnerships

Kendra Wilkinson STUNS Fans: I Wish I Had More Time With Holly Madison!