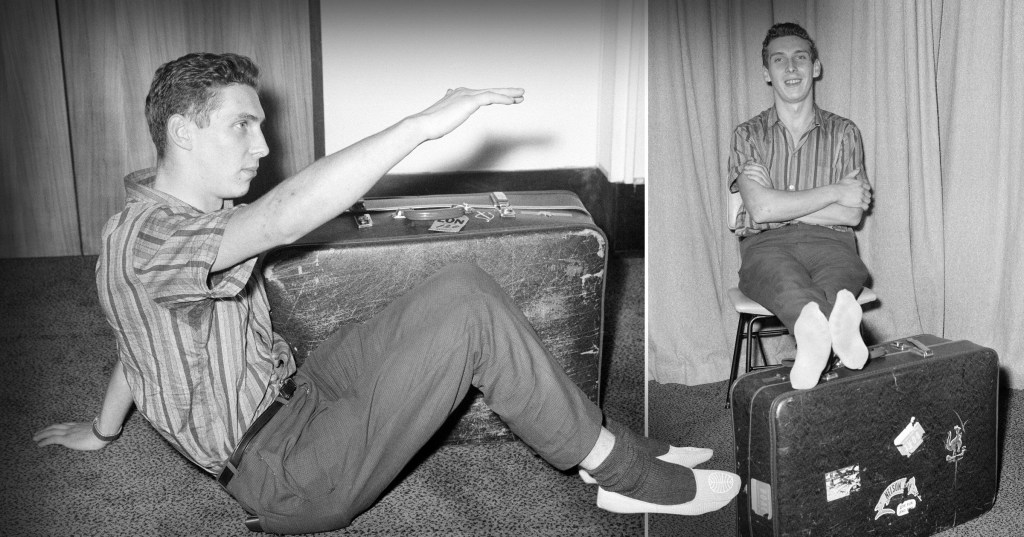 Brian Robson, now 75, wants to thank the two pals who helped him with his getaway (Picture: Mirrorpix)

A pensioner from Cardiff is looking for two Irishmen who helped him escape Australia by mailing him off in a wooden crate.

Brian Robson was 19 years old when he decided to go ahead with the ‘stupid’ plan to get home to Wales in 1965.

After 11 months Down Under, he was feeling desperately homesick, but the £40 a month he made working for Victorian Railways wasn’t nearly enough to cover a £700 plane ticket.

But after being talked into it for about a week, two Irish friends and colleagues, known to Brian only as Paul and John, helped pack him into a box ‘the size of a mini-fridge’.

They nailed it shut and send him off as cargo on a Qantas flight from Melbourne to London – at least that was the plan.

Brian says he needed their help because Paul had access to a typewriter to fill out the paperwork to send him off as post.

He told the Irish Times: ‘Paul really was 100% against it…but John said “don’t worry about it, I’ll persuade him”. And so, they both went ahead and helped.’

Into the tiny box, Brian brought with him pillows, a torch, his suitcase, a book of Beatles songs and two bottles – one for water and the other for urine.

Brian spent 96 hours in a crate before he was rumbled by the FBI in Los Angeles (Picture: Mirrorpix)

Brian, now 75, wasn’t expecting a luxurious trip, but what should have been a 36 hour direct flight ended up as a four day long ordeal.

The Qantas flight was full, so the crate, labelled by the escapee as containing a ‘computer’, was put on a much slower PanAm flight that ended up in Los Angeles.

Brian says The airplane’s hold was both freezing cold and boiling hot and that he struggled to breathe during the journey.

When the plane landed in Sydney he was left upside down for 22 hours, despite several ‘this side up’ labels on the crate, causing him to suffer blackouts.

He was left stiff and limping after his ordeal and recovered him hospital before being sent back to London (Picture: Mirrorpix)

After leaving Sydney and landing again, Brian thought he was finally in London.

But after being carted off to a freight shed, he peaked through a hole in the chest and caught eyes with a frightened US customs official who thought there was a dead body inside.

He was then interrogated by the FBI, who wanted to make sure he wasn’t a Cold War spy.

Once they were satisfied he wasn’t a threat, authorities decided not to press charges, instead flying him to London on a regular commercial flight.

Despite several ‘this way up’ stickers on the crate, Brian was left upside down for 22 hours (Picture: Mirrorpix)

Mike Yastrzemski comes off the bench, lifts Giants to win over Padres with pinch-hit homer

Grow with our Garden Party newsletter and virtual event series