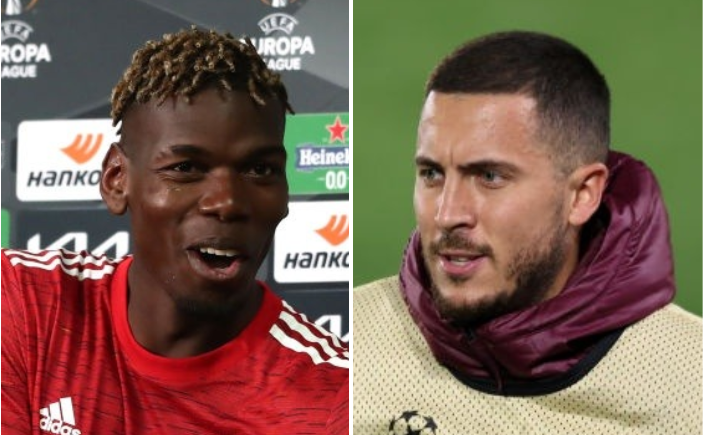 Mino Raiola has urged Manchester United to outline their plan to return to the top of European football to Paul Pogba, or risk losing him this summer and teased a possible swap deal involving Eden Hazard.

The France international has rediscovered his best form over the course of the last few months and played a pivotal role in cementing United’s position as the best of the rest in the Premier League, behind Manchester City, and in their journey towards the Europa League final.

Pogba’s long-term future, however, remains uncertain. The 28-year-old is approaching the final year of his current contract and talks over a new deal have been placed on hold.

Real Madrid and Juventus continue to be linked with a player who will be firmly in the shop window this summer during the European Championships and unless a breakthrough is made in negotiations, United will be placed in a difficult position, knowing they will be unable to make a profit on a player who cost them £89million four years ago.

Asked what the future held for Pogba, Raiola insisted his client is driven only by a desire to win football’s most important prizes but conceded ‘nothing is impossible’ ahead of the transfer window, and even suggested a possible deal involving Eden Hazard, who has struggled to make an impact at Real since his move from Chelsea, was not beyond the realms of possibility.

Stephen Curry Gets MVP Endorsement From a Former NBA Champion

When questioned as to why Pogba wasn’t already playing for Real Madrid, Raiola told AS: ‘It is a question to ask Madrid. At one time Pogba felt a lot of love and trust from United, and there were several other clubs.

‘Later, it is very difficult for United and Madrid to understand each other for a great transfer, because strong clubs do not want to sell strong players to other strong clubs.

‘And I’m not going to fool him, for Pogba playing for Madrid was always a very attractive thing for Zidane too. He is his idol as a young man.’

Pushed further on whether a move was likely this summer, Raiola threw Hazard’s name into the mix, saying: ‘I do not know. I think that nothing is impossible, but football depends on the day. As it is.

‘And you have to be flexible to think of all the possibilities. And if tomorrow Madrid wants to make a Hazard-Pogba change? It is just an example. And if all four parties like it, why not?’

LeBron James and Kobe Bryant Had an Unspoken Battle During the 2008 Olympics: ‘It’s Like 2 Alpha Dogs Being in the Same Room’