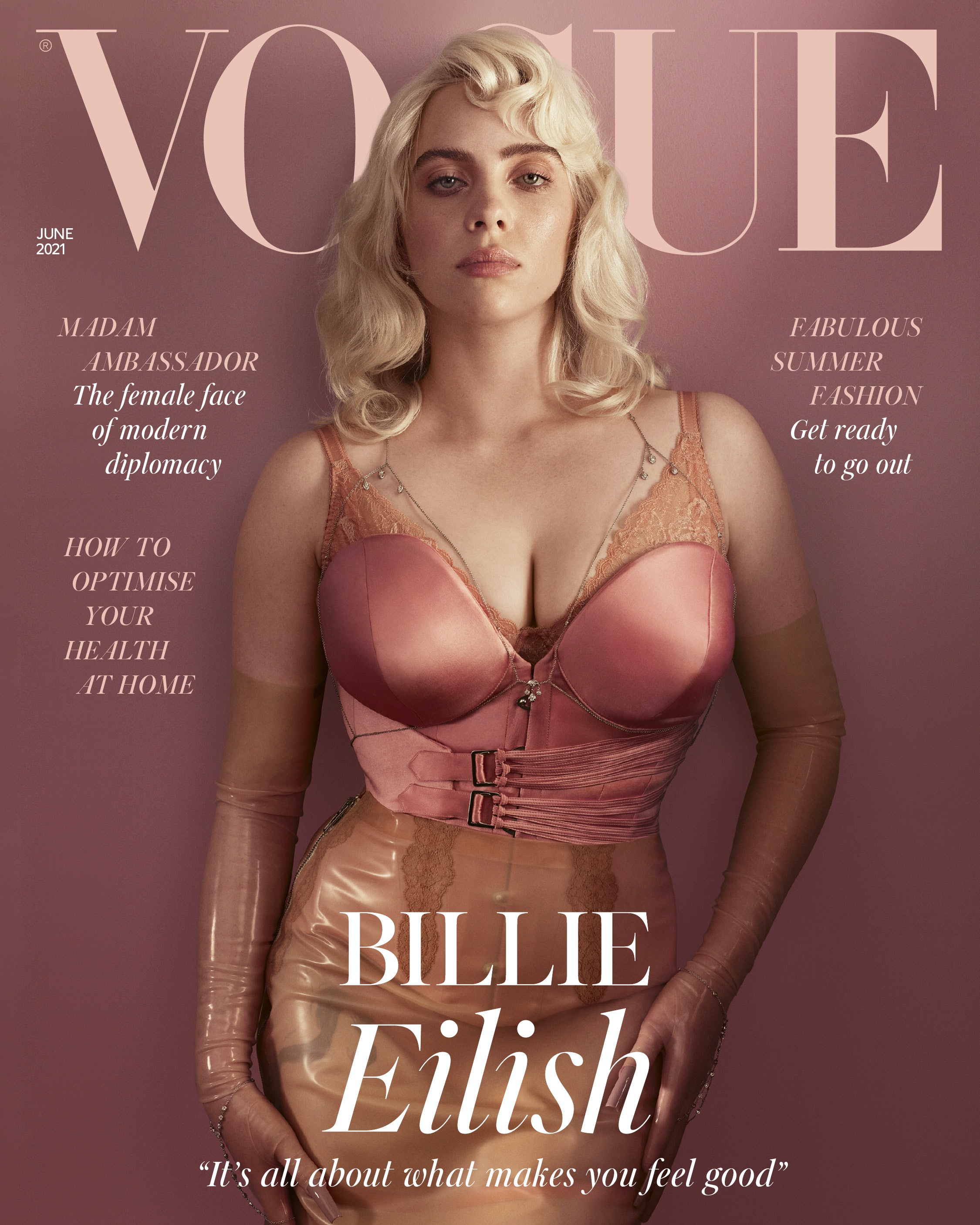 Completely departing from her usual M.O., Billie Eilish showed another side as British Vogue’s June cover girl. The seven-time Grammy Award winner embraced transformation by showing off her newly blonde hair and a pin-up-inspired look. But it wasn’t just her appearance that stunned fans. After the cover story hit the internet, fans on Twitter gushed about her photos and quotes.

Eilish, who has been known for wearing baggier clothes in the past, told Vogue that it had “really offended” her to hear people complimenting her for “feeling comfortable in her bigger skin.” She felt that it led to her being put on “such a high pedestal” that it became a problem. For the photo shoot, she intentionally went in the opposite direction, posing in lingerie and openly acknowledging that she had “literally never done anything in this realm at all.”

The singer-songwriter went on to call out how the public perceives women who dress in a certain way and explained how she wanted to upend that thinking. “Suddenly you’re a hypocrite if you want to show your skin, and you’re easy and you’re a slut and you’re a whore,” she told the magazine. “Let’s turn it around and be empowered in that. Showing your body and showing your skin — or not — should not take any respect away from you.”

Of course, quite a few people felt compelled to immediately comment on Eilish’s new look in the Vogue photos. One Twitter user noted it was their first time seeing her “in clothes that aren’t baggy.”

A lot of her fans were so blown away that they could barely even muster up words. Many let Vogue’s photos do the talking instead. One lamented that Eilish “didn’t even warn us or at least leave us breathing exercises.”

For others, “goddess” was the comparison they needed for their reaction.

Of course, the photos weren’t the only important part of the magazine’s cover story. Numerous Billie stans made it clear that they were also embracing her bold interview and the wisdom she had to share. “I love having billie eilish as a role model,” one fan tweeted alongside an excerpt.

While some seemed to think the cover was in a league of its own, others likened it to another internet-breaking favorite: Harry Styles’ December 2020 Vogue cover.

With this reaction, fans might just be lining up when the June issue of British Vogue goes on sale on Friday, May 7.

GRAMMYS 2021: Watch Doja Cat’s ELECTRIFYING Say So Performance
Rockhill Studios to Join Viola Davis and Julius Tennon on their Adaptation of ‘Girl’s Like Us’

The Latest: US to talk to WTO on wider vaccine distribution

MMA fighter rushed to hospital after snapping penis in horrific sex injury: ‘There was blood spurting all over the place’

Sydney Chase: Khloe is in My DMs Because Tristan Cheated with Me!