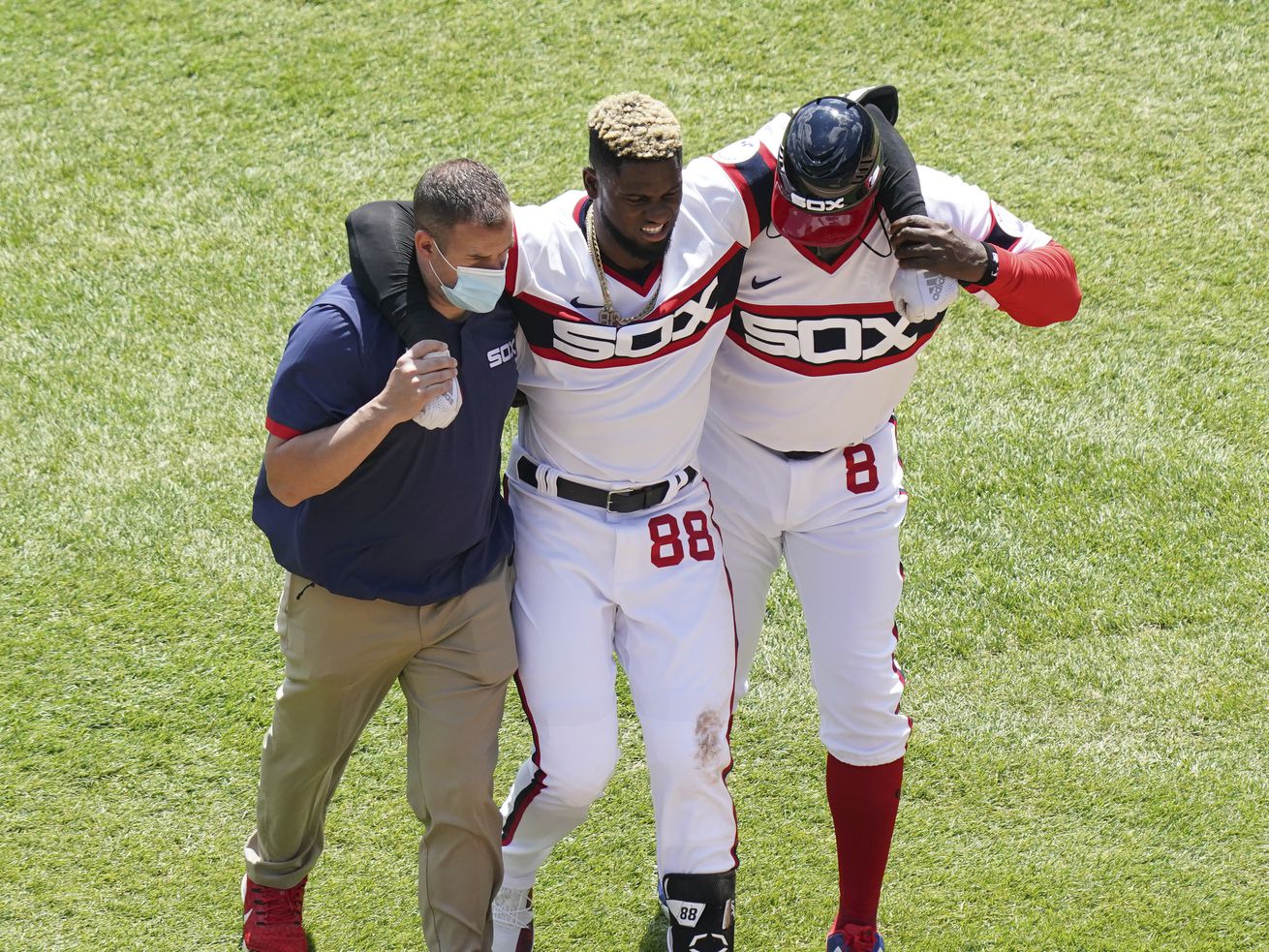 Luis Robert is helped off the field after he injured his hip Sunday. | Nuccio DiNuzzo/Getty Images

In the first inning of Sunday’s 5-0 loss, Luis Robert legged out a single but strained his right hip flexor in the process. He will undergo further evaluation Monday.

The White Sox are already down one slugging, young outfielder, and for a while they are going to be short another.

In the first inning of Sunday’s 5-0 loss, Luis Robert legged out a single but strained his right hip flexor in the process. Initial X-rays were negative, and the team said that he will undergo further evaluation Monday.

In spring training, Eloy Jiménez tore his pectoral muscle trying to rob a home run and isn’t expected to play this year unless it’s near the end of the season. Now, depending on the severity of Robert’s injury, the Sox could be without him for several weeks.

“That’s what you go through,” manager Tony La Russa said. “Adversity is always going to be part of the season. It’s hit us hard in the outfield.”

Adam Eaton pinch-ran for Robert and took his place in the outfield. The offense missed Robert’s spark, mustering just four hits and striking out eleven times.

Lucas Giolito worked around a third inning solo home run and a fourth inning error that allowed Amed Rosario to score to hold the Indians to two runs. He had eight punchouts and gave up five hits in 5 ⅓ innings.

How to unlock an iPad if you don't remember the passcode, or if it's disabled

“Yea, it sucks. That’s a guy we need,” Giolito said of Robert’s injury. “I’m just hoping that he can bounce back pretty quick. I don’t know much about hip flexors, but that’s a tough one. We’re kind of plagued by injury this year, with some of our key guys. Hopefully he can get it right quick and be back helping us out.”

Giolito said that he felt like his command was in and out early on, but he got better as the game went on.

“Especially with the changeup, started to finish it better, and get the results I’m looking for with it. Overall, kind of a grinder,” Giolito said.

The White Sox bullpen struggles continued Sunday. Despite Giolito holding the Indians to two runs, Codi Heuer gave up three runs in the seventh inning, on a José Ramírez homer and RBI single by Amed Rosario.

Robert has been a spark plug for the White Sox, both on offense and with his glove. He wowed with a catch at the wall in deep center field Friday and ran down a Josh Naylor line drive Saturday like a wide receiver. At the plate, he is hitting .316 this season and went 4-for-9 in this weekend’s series.

The depth of the outfield will be tested while Robert is out. Along with Jiménez, Adam Engel has been on the injured list with a strained right hamstring since March 21, and he has no clear timetable for a return.

“That’s a part of what you’re …read more

Conor Timmins is a poor man’s Cale Makar. The Avalanche is stacked with that style.

Afghanistan could face ‘bad possible outcomes’ as US withdraws, says top US general

Family of Chris Cornell settles with doctor over his death

59 thoughtful gifts for your wife, from sweet personalized items to romantic grand gestures