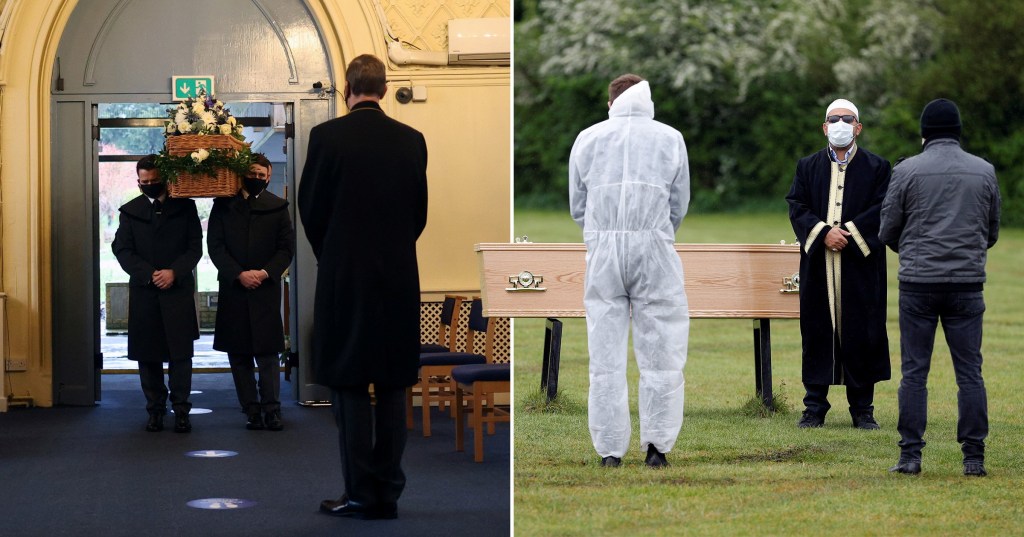 Only 30 people can attend under the current coronavirus restrictions (Picture: Reuters)

The legal limit on the number of mourners at funerals will be lifted on May 17, the Government has announced.

Under the current restrictions only 30 people are allowed to attend.

But as part of the next stage of lockdown easing later this month, the capacity will be determined by how many people can be accommodated in venues such as places of worship or funeral homes while maintaining social distancing.

This applies to both indoor and outdoor venues and all organisers must continue to be Covid-secure and follow social distancing rules, the Ministry of Housing, Communities and Local Government (MHCLG) said.

While venue capacities will vary, many will allow ‘significantly’ more than 30 people to attend, the MHCLG added.

The Government said the limit was able to be lifted due to the success of the vaccine rollout and people’s adherence to the latest national lockdown measures.

More than 15 million people have now had both doses of the vaccine, while 34.5 million have received their first jab.

Communities Secretary Robert Jenrick said: ‘The British people have made huge sacrifices throughout the pandemic to protect the NHS and save lives, and nowhere is that more apparent than in the deeply painful restrictions on the numbers attending funerals.

‘Losing a loved one has been incredibly hard during the pandemic and I am pleased we are now in a position, thanks to everyone’s continued efforts and the rollout of the vaccine, to remove these limits and allow more friends and family to come together and pay their respects.

Only 4% of laid-off service workers will get their old jobs back, study finds

‘I look forward to working with faith leaders responsible for places of worship, and those who manage venues such as funeral homes, to introduce the new arrangements in a way that continues to keep people safe.’

The move was welcomed by the National Association of Funeral Directors’ (NAFD) chief executive Jon Levett, who said: ‘Throughout the pandemic the Government has made sure immediate families were able to be there to say goodbye to a loved one and this has always been valued.

‘But it’s critical that all those who are grieving are not forgotten in the reopening of society – and for many families, the current restrictions have meant telling people very close to the person that has died that they simply couldn’t be there.

‘We’d still also like to see the Government move forward with its plan to trust the public to make informed, personal decisions about social contact – using testing as a safety mechanism – enabling us all to offer the simple comfort of holding hands, or giving a much-needed hug, to those who are isolated in their grief.’

Toronto-based Wealthsimple, an online brokerage backed by rapper Drake, raises money at a $4 billion valuation after a strong year of retail trading