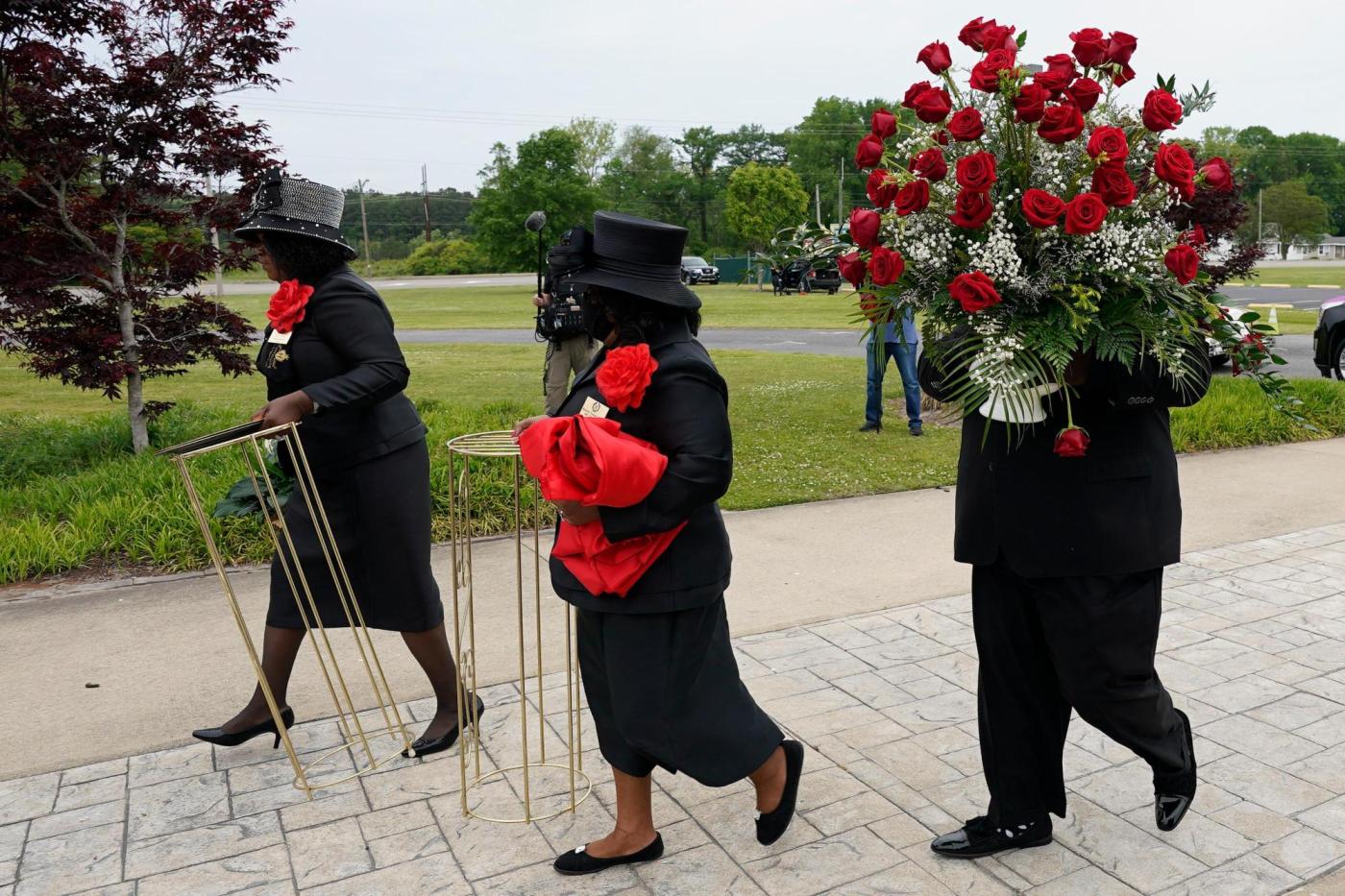 By BEN FINLEY and JONATHAN DREW

ELIZABETH CITY, N.C. (AP) — Mourners gathered Monday for the funeral of Andrew Brown Jr., a Black man shot and killed by deputies in North Carolina, with attorneys for the family calling for justice at the outset of the service.

The invitation-only service in a church in Elizabeth City followed public viewings that drew scores of people the previous day. The Rev. Al Sharpton was to deliver the eulogy, and other speakers included Brown’s relatives as well as civil rights attorney Ben Crump, who is representing Brown’s family.

Calling Brown’s death an “unjustifiable, reckless shooting,” Crump told mourners the legal team would continue fighting for justice and transparency, including the release of deputy body camera footage of the shooting.

A long line of mourners filed into the church, many wearing white T-shirts with Brown’s image and the words, “Say his name.” In the lobby, a wreath of red and white flowers with a ribbon bearing the message, “Rest in Peace Drew,” referring to Brown’s nickname, stood next to a tapestry with images of him. As the service started, an ensemble sang songs of praise including, “You’re the Lifter,” while some mourners stood and clapped.

Brown, 42, was shot and killed on April 21 by deputies attempting to serve drug-related search and arrest warrants, sparking days of protests in the city in rural northeastern North Carolina. An independent autopsy commissioned by his family said that he was shot five times, including once in the back of the head.

Family members have said that Brown was a proud father of seven, who was known for entertaining relatives with his stories and jokes.

Brown’s family asked Sharpton to deliver the eulogy because they felt the civil rights leader would properly honor his legacy. Sharpton recently delivered the eulogy for Daunte Wright, who was shot and killed by a police officer in Minnesota.

Sharpton has said that he wants to both celebrate Brown’s life and help call attention to larger problems with policing that need to be addressed.

Among the mourners arriving at the church was 40-year-old Davy Armstrong, who said he went to high school with Brown and lived near him while the two were growing up. He said Brown seemed to be doing well when he ran into him recently before the shooting.

“He was very humble, very generous. He said he was doing good,” said Armstrong, who works in construction. “We hear about this on TV all the time. But when it’s someone so well known and so respected, it’s pretty painful.”

The Rev. Dwight Riddick, a pastor at Gethsemane Baptist Church in Newport News, Virginia, said he was there to support the family and the cause against Black men being killed …read more

You’re invited to the concerts, but only if you’re fully vaccinated

I tried Walmart and Target’s competing grocery pickup services, and Walmart is by far the better option for weekly shopping trips