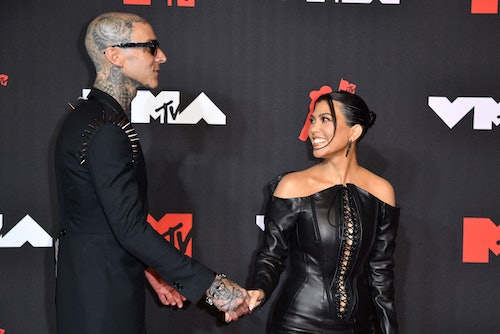 Kourtney Kardashian and Blink-182’s Travis Barker’s relationship was first confirmed in January 2021, with People reporting that the pair had been together for about two months. But their bond had been brewing since long before that. Before they started dating, Kourtney and Travis were friends because the two had been neighbors in Calabasas, California. After being “friends and family friends for a very long time,” a romantic relationship later came to fruition. Their latest sighting together (pictured above) was at the 2021 MTV VMAs, where they shared several kisses on the red carpet (see below).

Travis was first linked to the Kardashian family in 2006; he was dating Paris Hilton while Kim Kardashian was iconically her friend and closet organizer. In fact, after appearing in his own reality show Meet The Barkers, the Blink-182 drummer apparently encouraged the family to launch Keeping Up With The Kardashians. Fast forward to 2017, when Travis revealed to ET that his family occasionally hosts dinners with Kourtney’s family. He began appearing on KUWTK the same year, and his relationship with Kourtney only grew to the romantic state it’s in today.

Nonetheless, the details of Kourtney and Travis’ close friendship turned romantic affair can be traced in a timeline marked with charming nights out and intimate social media posts dating back to 2018. Without further ado, it’s time to take a deep dive into their relationship history:

Kourtney and Travis were spotted leaving vegan restaurant Crossroads Kitchen in 2018. Metro UK reported that Kourtney posted a pic on her Instagram Stories that appeared to be her touching a tiny plastic toy hand that was perched on one of Travis’ tattooed fingers. A love story in the making.

That same month, Kourtney and Travis reportedly attended a “late-night” Hillsong church service where they both sported all-black outfits. The Daily Mail stated they took a trip to the famous church in Kourtney’s Aston Martin, with her in the driver’s seat and the drummer riding shotgun.

Though they had been spotted in public on multiple occasions, Travis dispelled the chatter about a supposed relationship between them in March 2019. He told People, “Kourtney’s like a dear friend. That’s it… I mean, I love her to death. I love her family to death. But yeah, just friends.”

Additional news of Kourtney and Travis’ rumored romance continued to gain traction at the top of 2021 when a source told E! about their “very low key” connection. “They are a really good match, and Kourtney’s entire family already loves Travis. They have been neighbors and great friends for years, and it just recently turned romantic,” the source said.

That same month, the Internet exploded when Kourtney and …read more