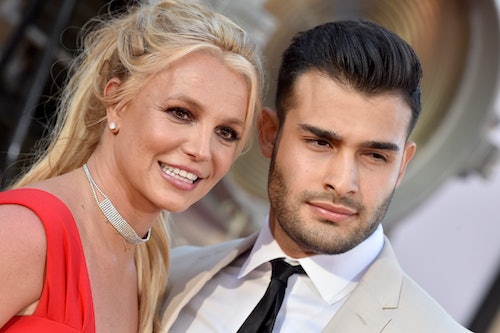 Now that Britney Spears and Sam Asghari are engaged, fans want to know if they’ll sign a prenup — including actor Octavia Spencer. “Make him sign a prenup,” the 51-year-old Oscar winner reportedly commented on the pop star’s engagement announcement on Instagram. Several other fans echoed that sentiment, urging the couple to sign a legally binding financial agreement ahead of their marriage. “So happy for you mama but please make sure y’all sign that prenup,” one fan wrote. “Get you a bullet-proof prenup,” someone else added.

So far, Spears hasn’t responded to the many comments encouraging her to sign a prenup. However, Asghari made it clear that he wants to protect his assets in case the two ever call it quits. “Thank you everyone who is concerned about the prenup!” he wrote on his Instagram Stories shortly after announcing the exciting news on Sunday, Sept. 12. “Of course we’re getting an iron-clad prenup to protect my Jeep and shoe collection in case she dumps me one day.”

The 27-year-old fitness trainer’s cheeky response came a few hours after Spears, 39, showed off her 4-carat diamond sparkler in an Instagram video. When asked whether or not she liked the ring, which was custom-made by Roman Malayev of Forever Diamonds, the “Oops!…I Did It Again” singer couldn’t contain her excitement. “Yes,” she responded enthusiastically before planting a kiss on Asghari’s cheek. “I can’t f*cking believe it!!!!!” she captioned the post.

Asghari was just as excited to share the news. On his own Instagram feed, the actor posted a kissing photo, which was captioned with king and queen emojis. In the picture, Spears is holding up her engagement ring finger, blocking the view of their kiss with her brand new diamond ring. “My phone exploded today!” Asghari wrote a few hours after posting about their engagement. “Thank you for the overwhelming love and congratulations! We both love every single one of you!”

Why Did Pieper & Brendan Leave 'BiP'?

Spears and Asghari met on the set of the pop star’s “Slumber Party” music video in 2016 and have been together ever since. They tried to keep their relationship under the radar, but in 2017, they made things Instagram official. The couple made their first public appearance together that same year. Now that five years have gone by, it seems they can handle anything that’s thrown their way, especially amid Spear’s battle to end her 13-year-long conservatorship.

On June 23, Spears spoke out about her conservatorship for the first time in court, calling the legal arrangement “abusive” and comparing her father to a sex trafficker. Earlier this month, her father officially filed to end the conservatorship after many tumultuous years. In August, Spears thanked Asghari for sticking by her side through it all. “Not only has this cute assh*le been with me through both the hardest and the best years of my life but he happens to be an extremely good cook!” she wrote on Instagram at the time.

Kim Kardashian ‘done’ having children amid split from Kanye West: ‘I have a lot of kids’

People *Swear* By These 47 Cheap, Comfortable Things On Amazon