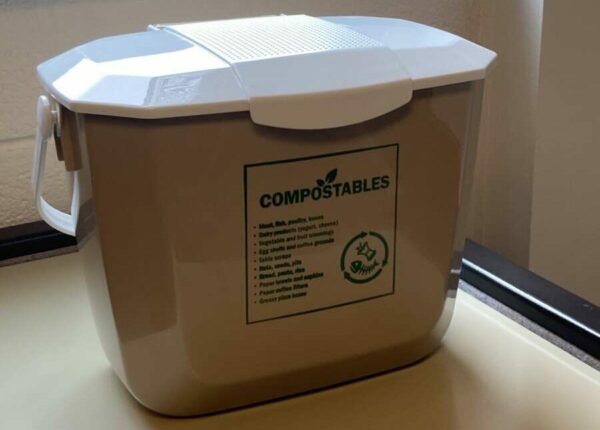 If you receive Arlington County’s residential trash collection service, then you place compostable items in your green organics cart instead of the trash. Earlier this summer the county distributed a countertop caddy and compostable bags to residential collection customers as a way to collect food scraps in the home.

Examples of items that can be composted include:

Vegetables and fruits
Meats, including bones, and old meat grease (sopped up with a paper towel)
Dairy products and eggshells
Breads
Coffee grounds, paper coffee liners and tea leaves (but not tea bags)

Food and beverage containers that are marked as compostable, some of which contain a plastic lining, should be kept out and placed in the trash instead, officials previously said.

For those who still have questions about how to best go about collecting and disposing of food scraps, a dedicated county web page has answers and a new county-produced video, below, also offers tips. Among them: place a paper towel at the bottom of the bag to soak up liquids, and be sure to wash the caddy with soap and water regularly.

The 4 best prenatal vitamins in 2021, backed by OB-GYNs and dietitians

SCOTT GALLOWAY: Our kids are falling behind at school due to the pandemic. Teachers aren’t going to fix it.

James Gandolfini, Michael Imperioli Got So Drunk on ‘Sopranos’ Set They Had to Be Chained to a Tree

CDC: Unvaccinated people are 11 times more likely to die of COVID-19 than people who got shots