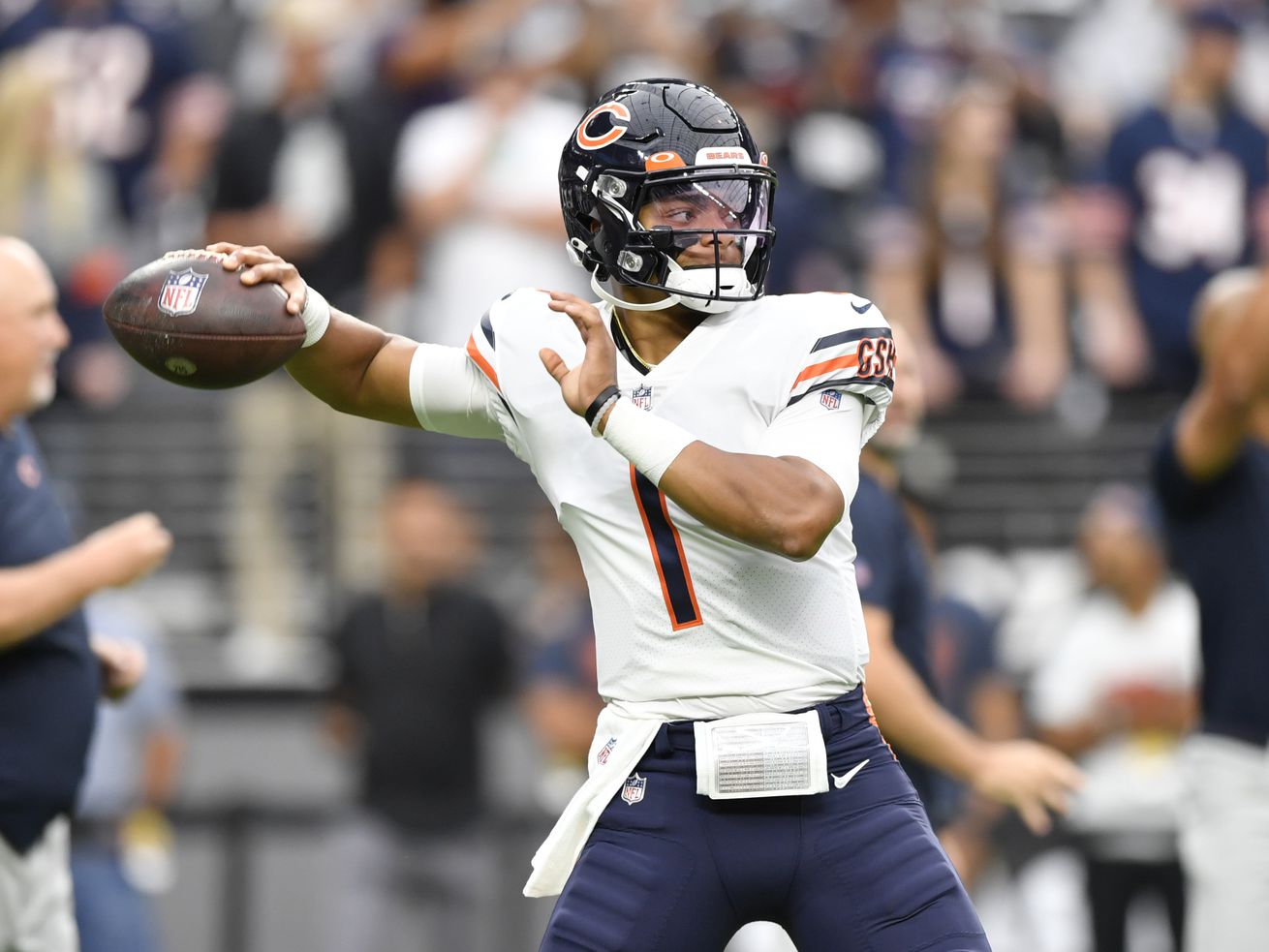 Justin Fields completed 12-of-20 passes for 111 yards, one touchdown and no interceptions for a 91.9 passer rating against the Raiders on Sunday. | Chris Unger/Getty

This looks like it’s going to be a long process. But Fields also presents the prospect of a breakthrough performance against a quality team. That’s the fun of watching Fields at this point.

In March, the prospect of Andy Dalton vs. Jordan Love against the Packers was looking pretty good to Bears fans. But Justin Fields vs. Aaron Rodgers is not a bad alternative.

The specter of facing Rodgers is as daunting as ever. The three-time league MVP has a 114.7 passer rating — with 10 touchdown passes and one interception — since a disastrous performance in the Packers’ 38-3 loss to the Saints in the season opener. And Bears fans can recite by heart Rodgers’ record against the Bears — 20-4 with a 107.2 passer rating (55 touchdowns, 10 interceptions) in regular-season games he started and finished. Plus the NFC Championship Game loss.

But Fields provides hope regardless of the outcome. No matter how painfully Rodgers might torture the Bears on Sunday — five or six touchdown passes in a first-half beat-down, an uncanny late throw to win a tight game — if Fields is still standing at the end, the Bears have real hope that someday that torment will end and better days are ahead.

We’re still at the cherry-picking stage of that process with Fields — a well-thrown deep ball to Allen Robinson, a third-down dart to Darnell Mooney, an athletic recovery of his own fumble and an 11-yard scramble for a third-and-four conversion serving as evidence of future greatness.

The big numbers have yet to come — 209 passing yards against the Lions; 111 against the Raiders. Four rushes for 14 yards. This looks like it’s going to be a long process. But Fields also presents the prospect of a breakthrough performance against a quality team. That’s the fun of watching Fields at this point — and underscores the importance of Matt Nagy’s decision to make him the full-time starter: You never know when it’s going to happen, but it could happen at any time.

2a. For the record, Fields will be the eighth Bears quarterback to start against Rodgers and the first rookie — Mitch Trubisky’s lone start against the Packer in his rookie season of 2017 came against Brett Hundley — a 23-16 loss at Soldier Field.

Trubisky was 1-6 against the Packers. The lone victory came at the absolute peak of the Nagy era in 2018 — a 24-17 victory at Soldier Field after beating the 11-1 Rams the previous week.

2b. The last Bears quarterback with a winning record against the Packers is Brian Griese (1-0), who threw two touchdown passes in a 27-20 victory over Brett Favre and the Packers at Lambeau Field in 2007. …read more

Halloween trick-or-treating returns to Chicago. Here’s everything you need to know

When removing a statue actually is antidemocratic

Latest line: A good week for Port of Oakland, bad one for umpire