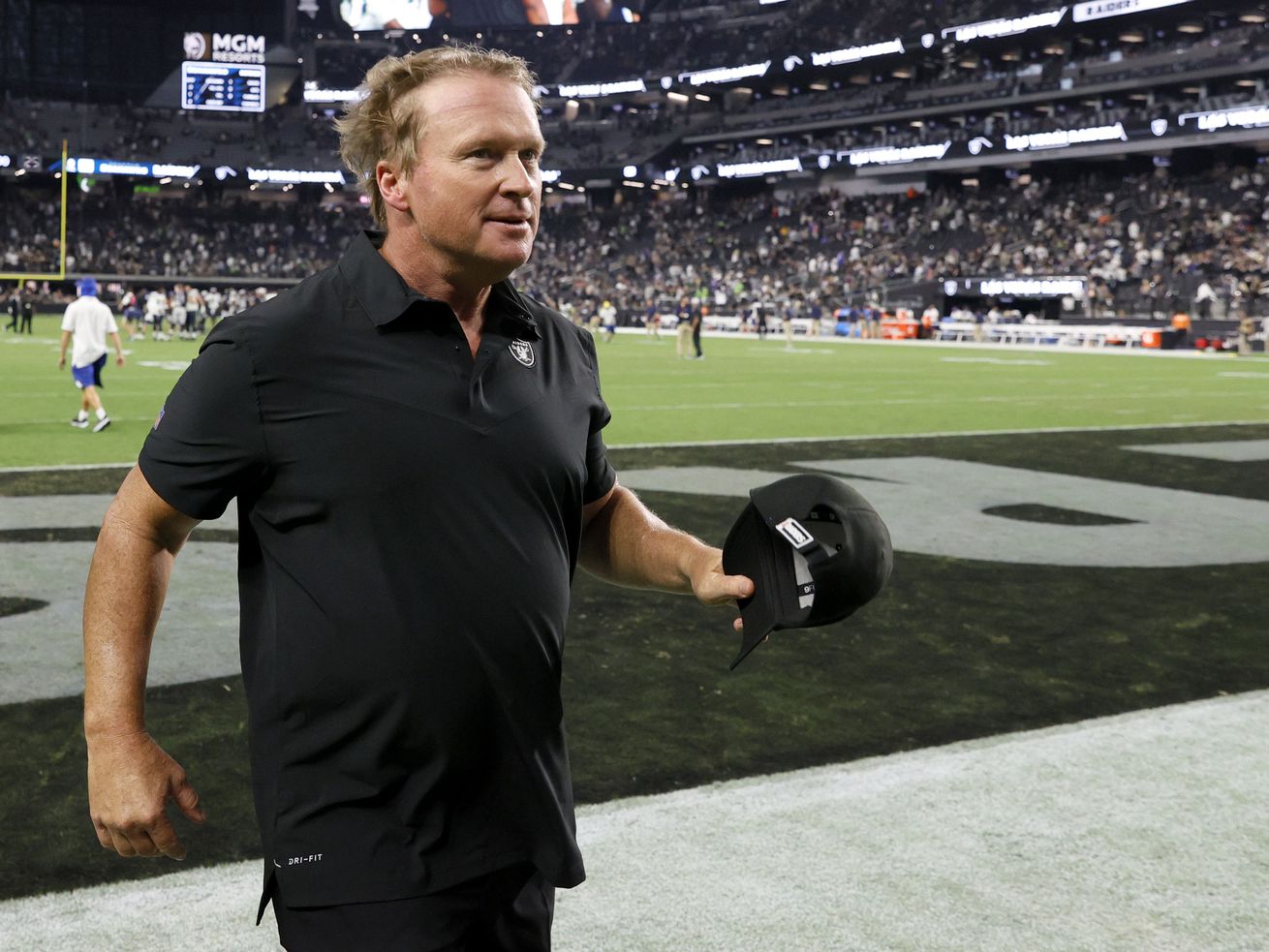 Jon Gruden stepped down as coach of the Raiders on Monday night. | Ethan Miller/Getty Images

Gruden is hardly an isolated case. Shocking as the crude and hateful language that Gruden used in emails was, anyone who has followed the NFL even just a little knows there is surely more where this came from.

Jon Gruden was right when he said Sunday that he doesn’t have an “ounce of racism” in him. It was more like a metric ton. Along with misogyny, homophobia and every other brand of bigotry.

Getting rid of Gruden — if you believe he “resigned,” I’ve got a bridge to sell you — was easy. But Gruden is hardly an isolated case. Shocking as the crude and hateful language that Gruden used in emails was, anyone who has followed the NFL even just a little knows there is surely more where this came from.

“This is not about an email as much as it is about a pervasive belief by some that people who look like me can be treated as less,” DeMaurice Smith, the executive director of the NFL Players Association, said in a cryptic series of Tweets on Monday night that, within a few hours, made a whole lot more sense.

“The powerful in our business have to embrace that football itself has to be better, as opposed to making excuses to maintain the status quo.”

And therein lies the problem.

Too many of the NFL’s powers that be — owners, executives, the league office, coaches, media partners — still believe that straight, white men have the only world view that matters. They don’t see Black people, women, the LGBTQ+ community or other marginalized groups as equals, and they’re sure as hell not going to treat them as such.

Photos: This mostly original 1908 California Craftsman in Berkeley is available for $1.4 million

Oh, they’ll say the right things in public to avoid being criticized for the Neanderthals they are, some even giving lip service to the NFL’s window-dressing efforts to promote equality. But behind closed doors, in their private conversations and chummy emails, they reveal who they really are.

Late Houston Texans owner Robert McNair once described players who were protesting racial injustice as “inmates running the prison.” Women who worked for and covered the Washington Football Team described a toxic atmosphere where they were objectified and demeaned by repeated sexual harassment.

And I’ve lost count of how many team owners have turned blind eyes to players credibly accused of domestic abuse because, as Bears chairman George McCaskey said, “much like anybody else who has a bias in this situation — there’s a certain amount of discounting in what they have to say.”

It should not go unnoticed that the emails that were Gruden’s undoing were uncovered during the investigation into the dumpster fire at the Washington Football Team — an investigation the NFL has tried mightily to bury.

The league has refused to release any of Beth Wilkinson’s detailed findings and, in contrast to previous NFL investigations, told her to present them verbally rather than in a written report. Paper trails, as we’ve …read more

A stolen election? Seriously? Then Trump and all Republican leaders are incompetent fools

Stars will turn out in Oakland for Michael Morgan tribute concert

Dear Abby: I gave a stranger a ride, and now I’m stuck in this mess