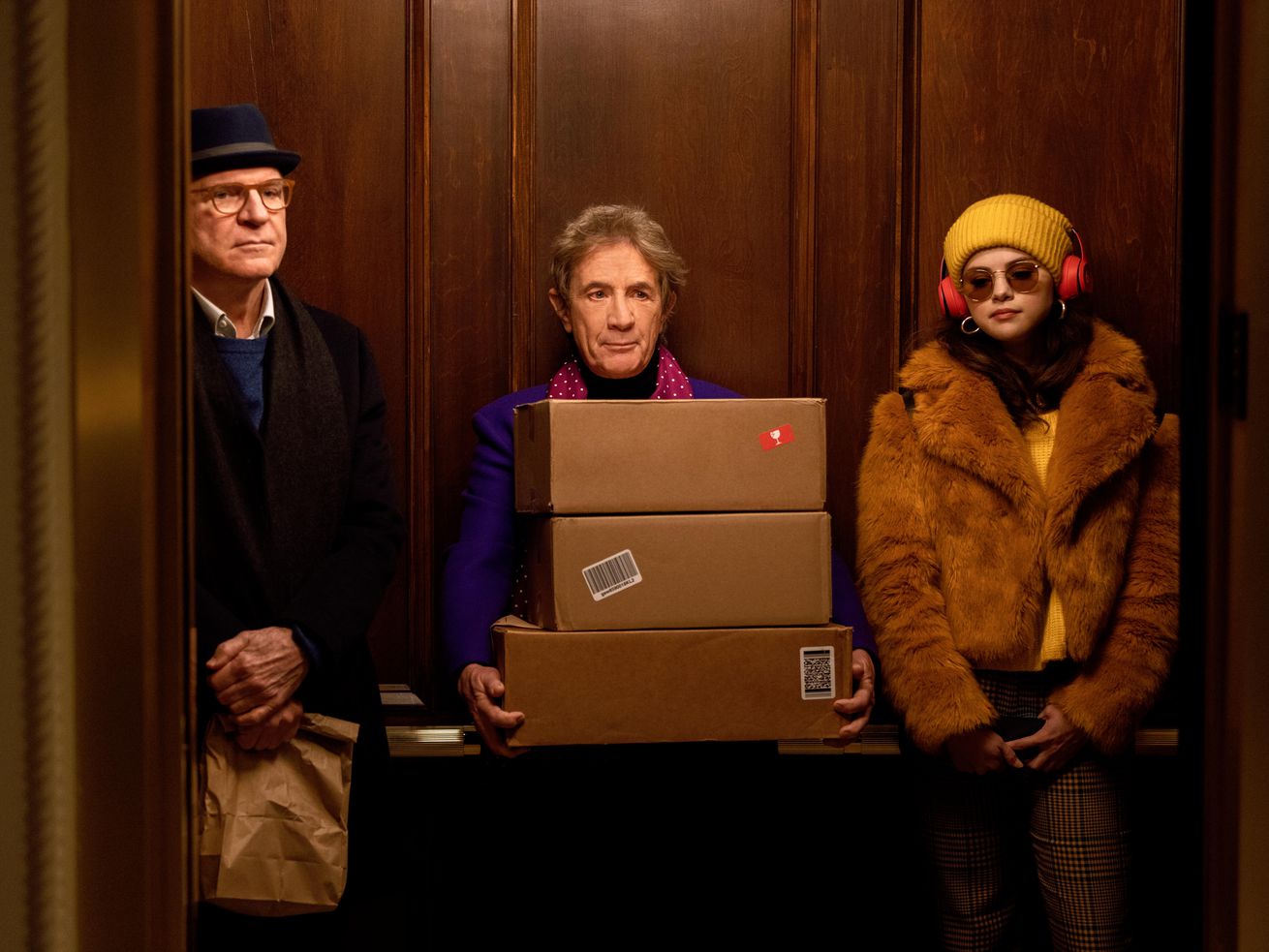 From left, Steve Martin, Martin Short, and Selena Gomez (plus some truly excellent coats) in Only Murders in the Building. | Craig Blankenhorn/Hulu

The only new show I care about this fall is Hulu’s Only Murders in the Building, the show that dares to ask, What would it be like if Nora Ephron made a murder mystery?

Centered on a group of true crime obsessives who start their own podcast after a fellow apartment building resident dies under mysterious circumstances, Only Murders stars Steve Martin, Martin Short, Selena Gomez, the picturesque and autumnal Upper West Side of New York, and a variety of enchanting outerwear.

The name of this column is “One Good Thing,” so you may be expecting to hear that Only Murders in the Building is, in some straightforward and ontological sense, “good.” I cannot do that. The murder mystery plot, which features such suspects as Sting playing himself, is best described as “pretty okay.” The jokes tend to lean on tired boomer-versus-zillennial gags (“Calls bother them for some reason!”). The show’s occasional stabs at formula breaking, including an episode with no spoken dialogue, are more notable for their laudable ambition than for their uneven execution.

What I can tell you instead is that the vibes are immaculate.

Only Murders in the Building, created by Martin and John Hoffman, with all three of the leads executive producing alongside Hoffman and Dan Fogelman, is Nora Ephron-esque in its total commitment to atmosphere. As in the best of Ephron’s work, that atmosphere is the one that New York’s Upper West Side radiates in all the purest fantasies of autumn: crisp, cozy, and bohemian. The leaves are orange, the light is golden, and there’s a chill in the air and a crackle of energy all around you. The only thing you can do in response is stride out of your tastefully decorated apartment in a strikingly oversized sweater and be adorable as heck about it.

And so we get Selena Gomez stalking down the street in a marigold-yellow faux fur jacket and plaid pants, scowling behind her impeccable sunglasses. We get Martin Short twirling past a cab in a violet wool Haider Ackermann coat, complete with coordinating purple silk scarf. We get Steve Martin preparing an omelet in front of an Ed Ruscha print in a jewel box of an emerald green kitchen. The choices are rooted in character, sure (costume designer Dana Covarrubias wanted Gomez’s clothes to look like armor, and production designer Curt Beech wanted Martin’s apartment to reflect past wealth), but mostly it’s about the vibes.

There is, more or less, a plot for all these vibes to arrange themselves around. Gomez, Short, and Martin all play neighbors in an enormous and glamorous apartment building called the Arconia. Martin is a former TV detective named Charles-Haden Savage, whose only real social stimulation comes from getting recognized on the street and who, lately is getting recognized less …read more

Hiltzik: Texas anti-abortion law is even worse than you imagined

Update: Porto’s Bakery and Cafe will open new location in Northridge in January

White Sox fans come out in force for playoffs, leave with mixed emotions after loss ends season: ‘Our future is really bright’