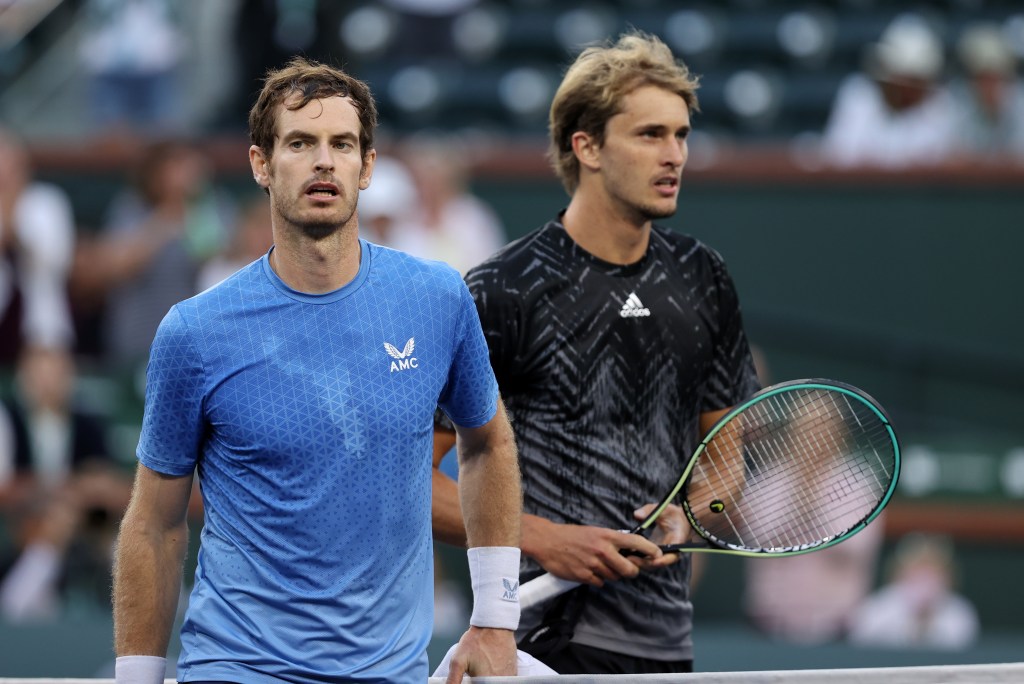 Murray’s match against Zverev was his first meeting with a top five player at a Masters event since he beat Novak Djokovic in the final in Rome in 2016.

It was arguably his biggest test since recovering from hip surgery in 2019 and impressive wins over Adrian Mannarino and Carlos Alcaraz in the earlier rounds of Indian Wells suggest he is on the way back to his best.

The 34-year-old was disappointed with the result against Zverev but was pleased he had opportunities throughout despite not playing his best tennis.

‘I’m not saying he played great either, but I don’t think I played well today. There were a lot of mistakes,’ Murray said.

‘There was some good stuff in there, but it was mixed in with bad. There was no consistency I don’t think.

Andy Murray raced into a 3-0 lead against the German (Picture: Tim Nwachukwu/Getty Images)

‘My average level was just not really there today. It was either good or bad. Yeah, I wouldn’t put that down as playing really well.

‘The positive for me to take from it is I had opportunities again.

‘I didn’t feel like I played a great match and still had chances, so that’s positive. But I’m disappointed because I want to be winning these matches. I haven’t in the past few months.

‘This is physically the best I’ve felt in a while, but I’m sort of battling my game a little bit.

‘The consistency isn’t there and the decision making is not great in the important moments.’

This was the first time Zverev had managed to beat Murray in his career and the No.3 seed was quick to pay tribute to his opponent’s efforts after the match.

‘He’s the only one of the Big Four that I hadn’t beaten yet, so I’m happy that I’ve done it,’ he said.

‘I always stayed in the match, even though I was down a break in both sets. I always knew I had a chance. The second set was an extremely high level from both of us. It could have gone both ways.

‘It was a fantastic match. Andy played extremely well, maybe as well as he’s played since the [hip] surgery.

‘I hope he continues playing the same way, because tennis did miss …read more

‘Florida Man’ Tom Brady Shares His Reason for Buying His $6 Million Yacht: ‘I Literally Said I’ll Never Own a Boat in My Life’

Jalen Rose Spent $15,000 on a Luxury Cell Phone After Signing His First NBA Contract and Never Even Used It

Kobe Bryant Used 1 Email to Prove His Fiery Competitiveness After Suffering a Brutal Season-Ending Injury: ‘I Feel They Are Forgetting How Good I Was’