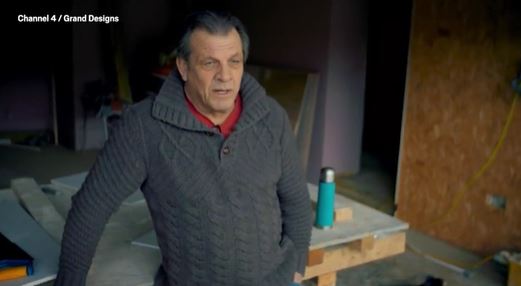 Grand Designs will see one hopeful face disaster but refuse to give up on his dreams as he builds an epic project on the Essex coast.

An upcoming episode of the show will focus on Geoff, a 63-year-old who’s determined to build a dramatically cantilevered steel framed house right on a flood plain.

It’s a risky project and, as Geoff quickly finds out, things are bound to go wrong.

In a clip shared exclusively with Metro.co.uk, viewers are told: ‘Loneliness can make us question ourselves in strange ways.

‘But even as his Christmas deadline evaporates, Geoff’s resolve is unflinching. The man will not be beaten.’

Geoff says: ‘Number one, I don’t ever give up. Number two, I’ve started, so I’ll finish. And I’m gonna finish.

‘I don’t regret anything I’ve ever done in my life – certainly not this.’

The episode will see Geoff risk everything as he sells his luxury villa in Spain to build a flood resistant architectural marvel on the Essex coast budgeted at a massive £700,000.

Not only is it a huge risk, Geoff’s got the added complication of having to make his new property completely flood resistant, resulting in him spending £195,000 as anchoring steel and concrete foundations are drilled over 14 metres into the ground

However, as he sinks every penny into the project, and moves into a tiny caravan on site, he hits a world of trouble.

Along with the arrival of the Covid-19 pandemic, the Spanish property market has collapsed, leaving Geoff in majorly hot water.

With no funds to continue, he’s determined to find a way.

Will Geoff’s incredible efforts pay off?

Grand Designs, Wednesdays at 9pm, on Channel 4. Episodes are also available to stream via All 4.

MORE : Grand Designs viewers shocked as couple demolish 200-year-old mill they’re supposed to be restoring: ‘It looks like a bomb has hit it’

MORE : Grand Designs viewers blown away as couple build home that floats above water lauding ‘one of the best episodes ever’

Most Relationships End. That Doesn’t Mean They Were A Failure.