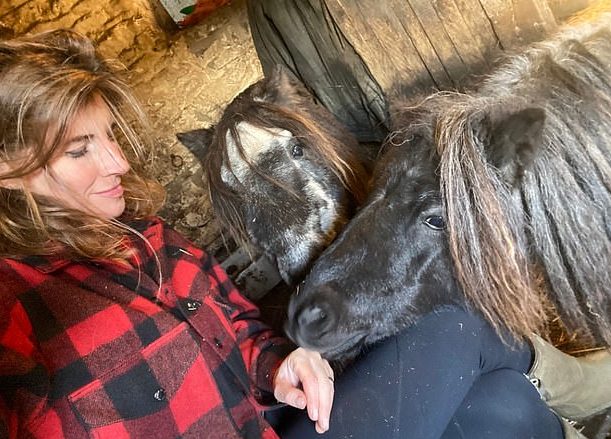 Amanda Owen was tearful in the scenes on the show (Picture: Twitter/@amandaowen8)

Our Yorkshire Farm viewers were left ‘in bits’ on Tuesday night after Amanda Owen had to tell her children their pony Little Joe had died.

The latest episode of the show which focused on the farm in Upper Swaledale, North Yorkshire, was an emotional rollercoaster for all involved.

In sad scenes, Amanda was given the horrible task of telling her brood of nine children their beloved 40-year-old pony, Little Joe, died suddenly overnight.

She asked her mum: ‘Is that pony going to die?’ pointing towards another of their animals, a pony named Toby.

Amanda explained this would not be the case as Toby was still young and Joe was much older.

The youngster went on to ask her mum: ‘What happened? Did he get old and die?’

Amanda has opened up their Yorkshire farm to viewers in recent years (Picture: ITV/Rex)

‘He did, he didn’t suffer, he just dropped, he must have had a heart attack,’ the Yorkshire Shepherdess reassured her.

Another of the Owen siblings, Clemmy, was very much looking on the bright side after the sad news.

She commented: ‘Well one good thing, I’ve looked after him really well, he’s been fed a lot of food and grown a lot of really woolly wool that’s really cosy.’

Amanda agreed, replying: ‘I don’t think there could have been a better looked-after pony.’

The brood was given the opportunity to say their final goodbyes to the pony, and those at home watching were gutted by the scenes.

Another particularly distraught viewer wrote: ‘Jesus Christ I wish I was coping as well as the Owen kids over the death of Little Joe on Our Yorkshire Farm Horse #OurYorkshireFarm,’ while another shared: ‘Omg poor little Joe. How heartbreaking #OurYorkshireFarm @AmandaOwen8.’

Of course, the children were all devastated as they’d grown up with Joe all their lives.

Amanda’s eldest, 20-year-old Raven came back from university after the death of their pony.

She said: ‘Raven’s really upset about losing Little Joe, he’s been a continuous presence in her life.’

In incredibly sweet scenes, Amanda and her kids took part in creating a memorial tree trunk for Joe, leaving messages and pictures for him.

Our Yorkshire Farm returns next Tuesday at 9pm on Channel 5.

If you’ve got a celebrity story, video or pictures get in touch with the Metro.co.uk entertainment team by emailing us celebtips@metro.co.uk, calling 020 3615 2145 or …read more

Khloe Kardashian reveals how her sisters get over their ‘brutal’ fights