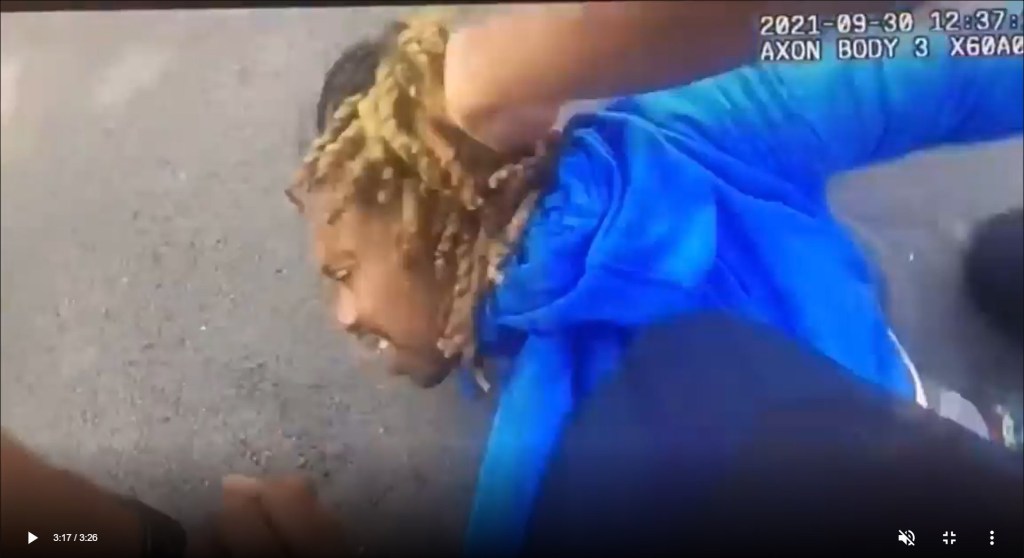 This is the moment a disabled black man is dragged out of his car by his hair after repeatedly telling police he couldn’t use his legs.

Clifford Owensby, 39, has accused the Dayton, Ohio Police Department of racially profiling him and of brutality after he was pinned down to the ground.

Video footage shows him explaining how he ‘can’t step out of the car’. The officer says he can help him get out and adds: ‘I’m telling you, it’s not an option.’

Owensby says: ‘You’re not going to touch me. There will be a lawsuit it you put your hands on me for no reason.’

The officer replies: ‘You can cooperate and get out of the car or I can drag you out of the car, do you see your two options here?’

Owensby then calls a friend for help and repeatedly shouts ‘I’m a paraplegic’ as officers drag him out of the vehicle and hold him by his hair.

He screams ‘somebody help’ as he is pinned down the ground and cuffed behind his back before being taken to a police car.

Over the weekend Owensby filed a complaint with the NAACP civil rights group over the arrest on suspicion of a drug offence on September 30.

On Friday police, released bodycam footage of the incident saying the department had been working to improve ‘community and police relations’ since June 2020.

The summer of last year saw a string of protests against racism and police brutality, following the murder of George Floyd by Minneapolis officer Derek Chauvin.

In the statement, Dayton police said officers had been observing a ‘suspected drug house’ and stopped Owensby after seeing him depart from the house in his car.

He was asked to hand over his identification, which police said revealed he had been convicted of illegally possessing guns and drugs.

Owensby has accused the police department of racial profiling and his taking his complaint to the NAACP civil rights group (Picture: WHIO)
Police have now release bodycam footage of the incident and said they have been ‘working to improve relations’ since Black Lives Matter protests last summer (Picture: Dayton PD)

The officer told him to get out of the car so it can be checked by a drug-sniffing dog.

Officers removed Owensby’s three-year-old son from the back of the car following the arrest.

A bag containing $22,450 (£16,500) in cash was found in Owensby’s car, which the sniffer dog indicated had been near illegal drugs, Dayton police said in its statement. It said it was investigating the episode.

Celebrities React To Kanye West - Donda (Official Album)
Cleveland Browns at Chargers: Who has the edge?

‘What Happened, Brittany Murphy?’: How a likable star got mixed up with the wrong con man

High school football: All of the scores from Friday’s Week 8 games

What to know before San Jose State hosts No. 24 San Diego State