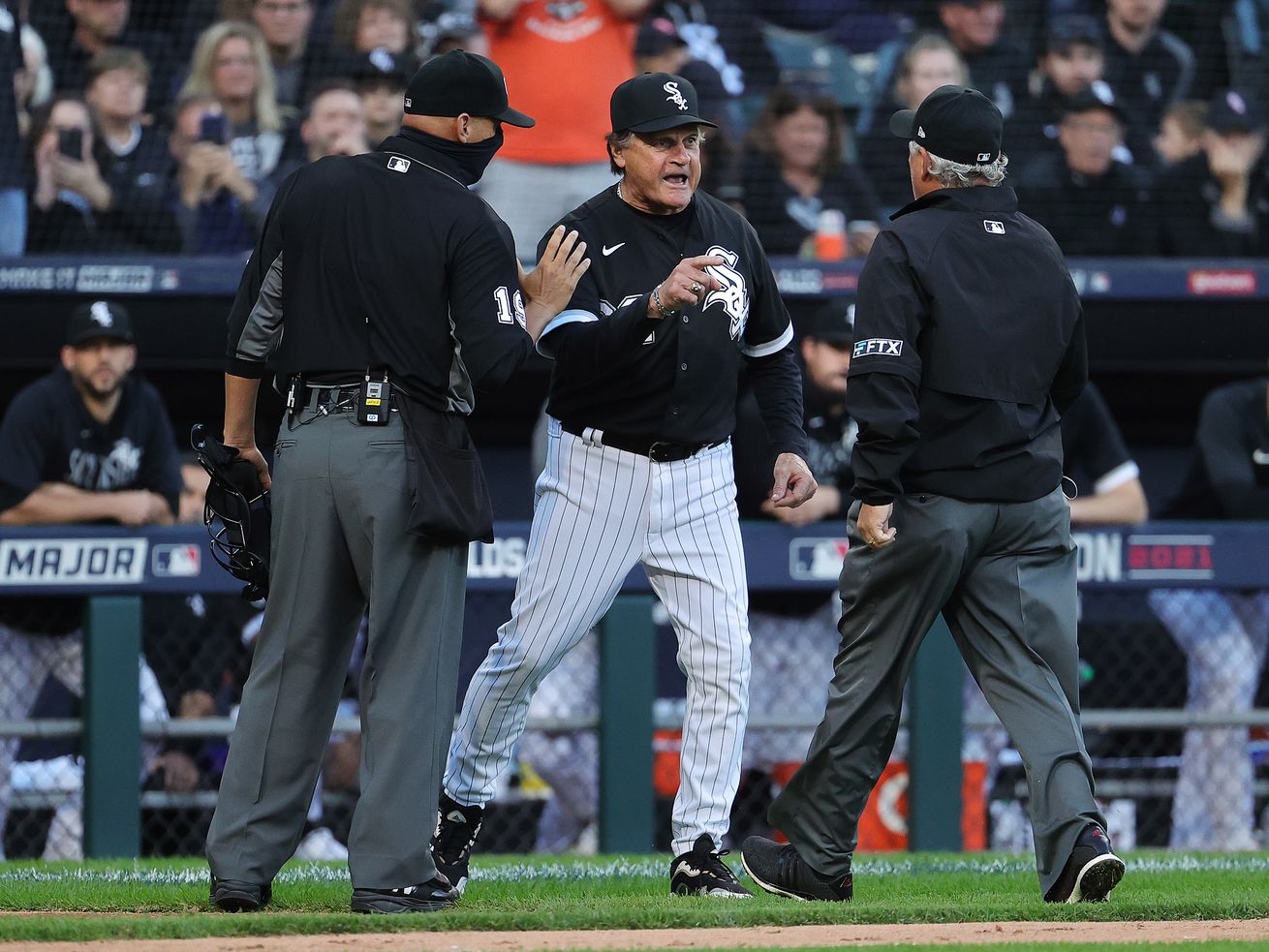 Tony La Russa begins a long argument with the umpires after Jose Abreu was hit by a pitch from the Astros’ Kendall Graveman in Game 4. | Photo by Jonathan Daniel/Getty Images

La Russa called the Astros’ “character and credibility” into question, which is sure to create tension next season between the teams and between their managers — assuming both are back.

In the quiet aftermath of a 10-1 loss to the Astros at Guaranteed Rate Field that ended a mismatch of an American League Division Series at three games to one, White Sox manager Tony La Russa wasn’t downhearted or gloomy or even morose.

No, he was angry.

We didn’t see a lot of anger from La Russa in his comeback season. We didn’t see much indignation or rancor. There were times it would’ve been reasonable to wonder if, deep into his 70s — and back in the dugout for the first time in 10 years — he still had all the fire inside him that burned throughout the heyday that led him to the Hall of Fame.

But it was something else to sit in a room with La Russa when it was all over. Ticked off enough to voice some heavy-duty accusations, he ripped into the Astros for an otherwise inconsequential moment in the eighth inning of Game 4 — when Jose Abreu was hit by a two-out, 3-2 pitch from reliever Kendall Graveman.

“It just leaves a bitter taste in your mouth and in my gut,” La Russa said. “That’s just — there’s a character shortage there that they should answer for. It is stupid, too. … I’ll be interested to see if they admit it [was intentional]. If they don’t admit it, then they’re really dishonest.”

Well, here’s the answer: The Astros are really dishonest. Unless the answer is that La Russa really doesn’t know what he’s talking about. Either way, Astros manager Dusty Baker came nowhere within the ballpark of admitting anything.

Not even a little way?

“I beg to differ with Tony,” he said. “No. I mean, there was no intent and there was no reason to do that. Zero.”

The teams aren’t even rivals, Baker contended. They have no bad blood between them, he went on.

But it isn’t hard to think of one reason why the Astros might have wanted to give the Sox such a parting gift. Everyone remembers the incendiary comments made after Game 3 by Sox reliever Ryan Tepera about the Astros and their maybe-just-maybe-still-cheating ways. Is that why they were still stealing bases to the very end of a blowout? Is that partly why Jose Altuve — who’d been hit earlier in the game and been the recipient of profane chants from the crowd — circled the bases after his three-run, ninth-inning home run with the speed of an overfed sportswriter?

Regardless, La Russa called the Astros’ “character and credibility” into question, which is sure to create tension next season between the teams and between their managers — assuming both are back.

Community rallies behind Timuel Black, honoring a life of service

Startups are betting on a psychedelic gold rush

Critics Rank the Best Films and Performances of the Fall Festivals