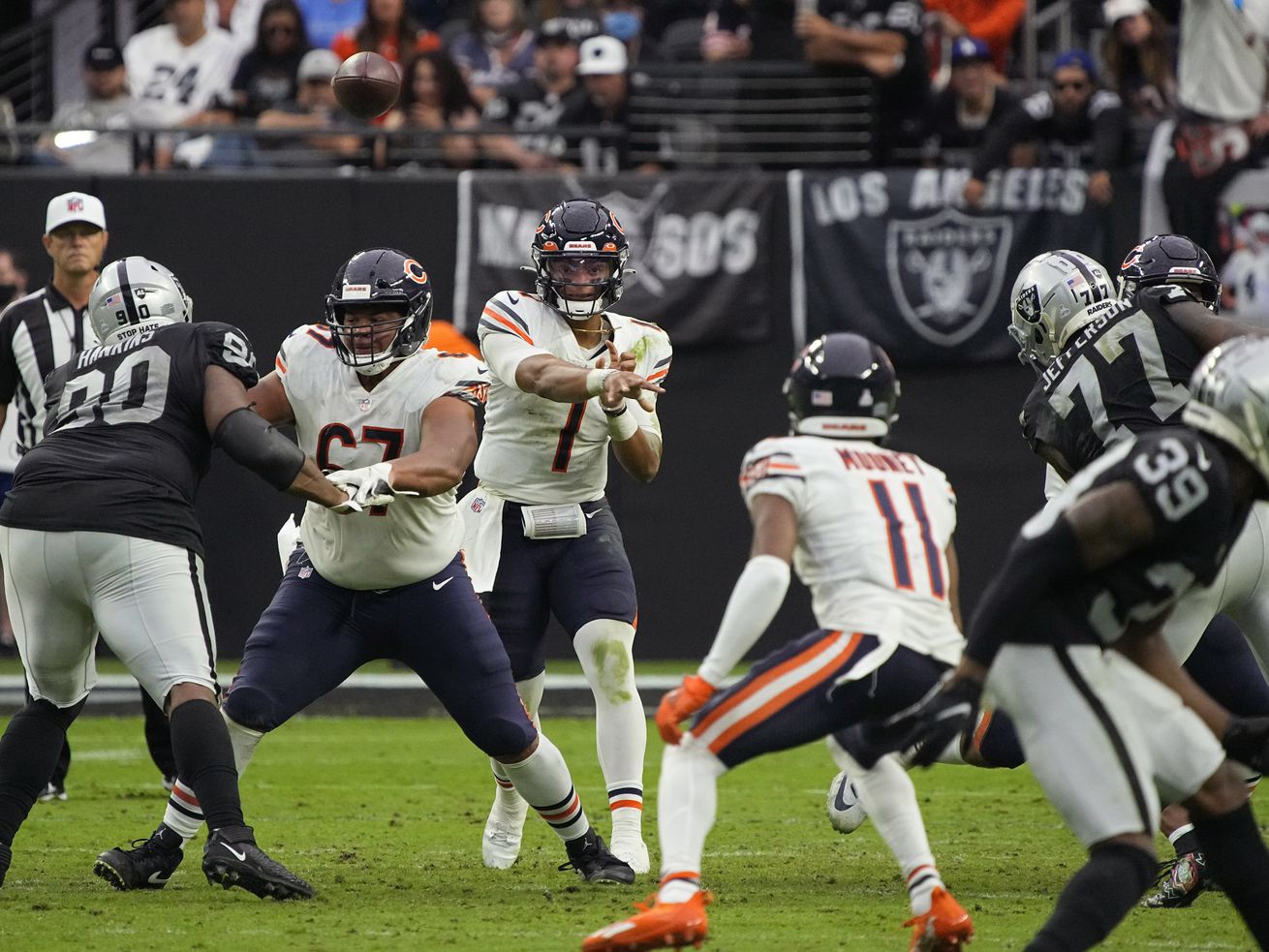 The Bears took what the Raiders gave them Sunday — rushing for 143 yards, but passing for only 111. “We feel good about some of the things that we had in [that] game plan and did not use,” offensive coordinator Bill Lazor said.

Justin Fields’ first NFL touchdown pass was notable to Bears offensive coordinator Bill Lazor — not because it was his first, but because it wasn’t easy.

On a second-and-goal play from the Raiders’ 2-yard line, Fields saw tight end Justin Horsted engaged with Raiders cornerback Amik Roberson in the back of the end zone. Fields made a pinpoint throw that allowed Horsted to disengage with Roberson just enough to reach out and make the catch and give the Bears a 7-3 lead en route to a 20-9 victory at Allegiant Stadium in Las Vegas.

“A lot of guys come out of college and they look for their receivers to be wide open, and he wasn’t wide open,” Lazor said. “He was more NFL open, and he still gave [Horsted] a chance. That’s the big thing I took from [that play]. That was just good.”

What Lazor was most pleased with was that Fields didn’t play it safe. He took a chance. And while that was a two-yard touchdown pass, its still indicated an aggressiveness he hopes will pay off with downfield throws for big gains in the future.

Fields has one turnover in two games with Lazor calling the offensive plays — an interception by Lions cornerback Amani Oruwariye that was tipped at the line of scrimmage. He also fumbled against the Lions but recovered it.

Lakers’ starting lineup comes into focus, but work to do before opener

“I can probably in my mind picture all these plays through training camp where he took the shot and shouldn’t have — or took a shot and we’re pleased he tried even though the defense got their hands on the ball,” Lazor said.

“That’s the balance for a quarterback, because what you don’t want is a cautious quarterback. You want a guy who’s aggressive, but who’s smart. The balance of that is the key to growth. I think he’s done a good job with that and he’s taken some throws down the field.”

The Bears had four pass plays of 27 yards or more against the Lions — Fields’ first game with Lazor calling the offensive plays. But the passing game was stifled against the Raiders. Fields threw for 111 yards. His long play was 18 yards to running back Damien Williams on a short throw. His longest pass play to a wide receiver was 15 yards to Darnell Mooney.

The Bears were glad to take what the Raiders were giving them — they rushed for 143 yards even with running back David Montgomery out with an injury. And while the passing game was stunted, Fields did not throw an interception, was sacked twice and did not fumble.

Celebrities React To Kanye West - Donda (Official Album)
‘Bergman Island’: How Mia Hansen-Løve Found Herself (And Her Work) in Her Most Personal Film Yet

Jenelle Evans: My Mom STOLE Jace from Me and I Deserve to Have Him Back!