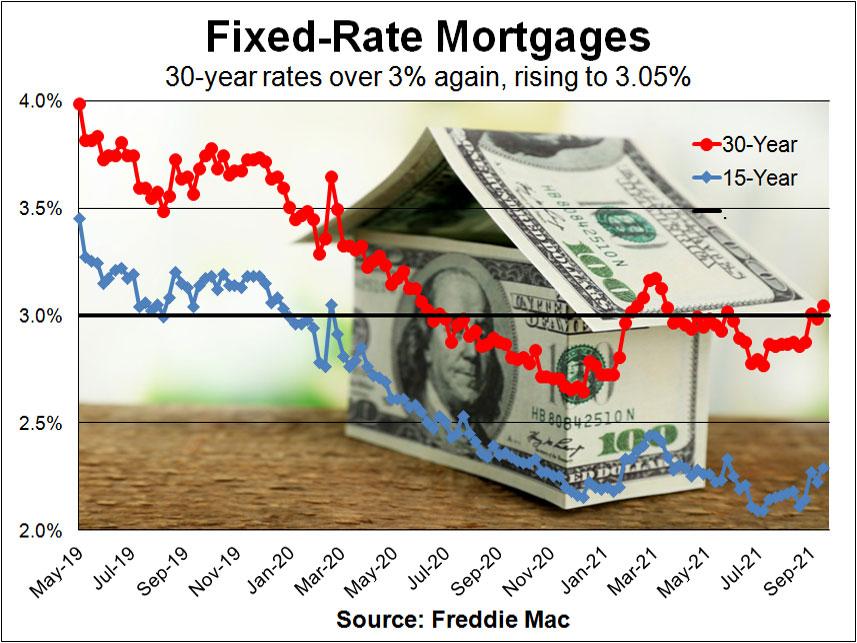 Freddie Mac mortgage rates climbed to 3.05% this week, 40 basis points higher than the in January. That’s before the Fed’s much anticipated plan to curtail bond buying, tapering mortgage-backed security purchases to $40 billion per month.

Certainly, supply chain challenges and labor shortages have contributed to the Consumer Price Index climbing to a massive 5.4%.

A barrel of oil is nearly double the price it was one year ago, now at least $73.

Will higher mortgage rates and inflation torpedo home prices? What do the experts see on the housing road ahead?

Jeff Tucker, senior economist at Zillow, sees the pace of home price appreciation slowing down next year. The national Zillow Home Value Index is expected to rise 7-9% next year. That’s a slowdown from the 11.7% growth pace of August 2020 through August 2021.

Price gains will be even slower in expensive West Coast markets like Seattle, San Francisco and Southern California, Tucker said.

“The most expensively priced markets will hit a plateau,” he said. “Prior (home price) gains were almost entirely offset by lower interest rates.”

Yet, homebuying demand remains strong even as interest rates rise. Using rent as a barometer of housing demand for all housing types, Tucker noted that rent is rising in all markets. Because price gains and mortgage rates make it harder for millennial homebuyers, Tucker suggested they consider working from home at least two or three days a week well into the future.

“With a good job, they can buy a home someplace they can afford,” he said.

Not All IATSE Members Will Be on Strike, but They All Want to Shut Down Hollywood

Fairweather cites climate change as the housing crisis for the next 30 years.

“Even if we get down to zero carbon emissions, every year is worse,” she said. “(California) homes in fire-prone areas are expensive to insure. Brush clearing and metal roofs are expensive. Wildfires cause enormous economic damage.”

She sees Palm Springs as a strong area for remote workers to purchase homes.

Fairweather is optimistic about the recent California rezoning laws as an avenue to increase the housing supply.

Rising interest rates could cause home prices to drop in 2023, observed Raymond Sfeir, director of the Anderson Center for Economic Research at Chapman University.

Sfeir thinks the Federal Reserve will start tapering next month, buying one-third less in Treasury and mortgage bonds, currently at $120 billion per month. Short-term interest rates like the prime will push up sooner.

“I would not be surprised if home prices start going down in 2023,” he said.

The low number of homes for sale is the only thing keeping prices up. Sfeir observed people are staying in their homes about nine years on average, compared with a historical average of five years. And retirees are staying put because senior retirement homes are extremely expensive.

As for inflation, Sefeir said, “the Fed board members have been wrong every time they met.”