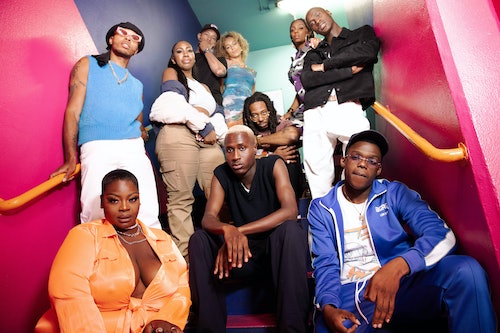 ITV2’s newest reality series Peckham’s Finest lands on our screens next Wednesday (October 20). The “observational reality” show will follow a group of young DJ’s, business owners, and social media stars in one of South London’s most thriving neighbourhoods, documenting the highs and lows of friendship, relationships, and work in their everyday lives.

Peckham is described in a recent teaser trailer as a “mini Lagos”, a “palace”, “the hub and heart of the Black community”, as “lively” and “fun” by its cast and ITV’s Commissioning Editor Peter Tierney adds that “the series will reflect life in Peckham in a way that our viewers can engage with and relate to.” Produced by the same team behind The Masked Singer, the show will shadow a core cast of 10 young people: social media queen Queen MoJo, artists Kevin and Karl (AKA the Flag Twins), baker and business owner Shanice, choreographer and personal trainer Gilly, model and student Isla Loba, DJ Mark Ashley-Dupé, BMX competitor Tre Whyte, radio host Teeshow, and owner of Best Of Both Boutique Chantel. These 10 friends will be joined by some of their nearest and dearest on the show as well as other Peckham business owners and local celebrities.

With a release date just around the corner, the buzz around Peckham’s Finest is starting to pick up and a recent interview with the cast on ITV proves that they are ready and raring to go, too. So, if you want to get ahead of the game and starting following the cast on Instagram before any of your friends, look no further. Unfortunately, I haven’t been able to track down any pages for Shanice (the young baker appears to be off the grid) but below you’ll find details for all other cast members. Their socials provide the perfect peek into what they’re doing ahead and will keep you up-to-date with all the latest from SE15.

Self-described “fashionista” Queen Mojo is a social media savvy dancer with a combined following of over 260k across Instagram and TikTok. Mojo posts motivational messages on her platforms, celebrating body confidence and sexuality, as well as opening up about mental health.

Kevin & Karl (AKA The Flag Twins)

Multitalented twins Kevin and Karl do it all, from modelling in high-end fashion campaigns to launching their own online platform, Mission Statement. The twins also do creative directing, fashion consulting, and see themselves “taking over the world” in the next five years.

Former BMX rider and brother of Olympian Kye Whyte, world medallist Tre is now a coach and often posts all things BMX-related on his Instagram.

Neil DeGrasse Tyson to Demi Lovato: Aliens ‘Have No Feelings’