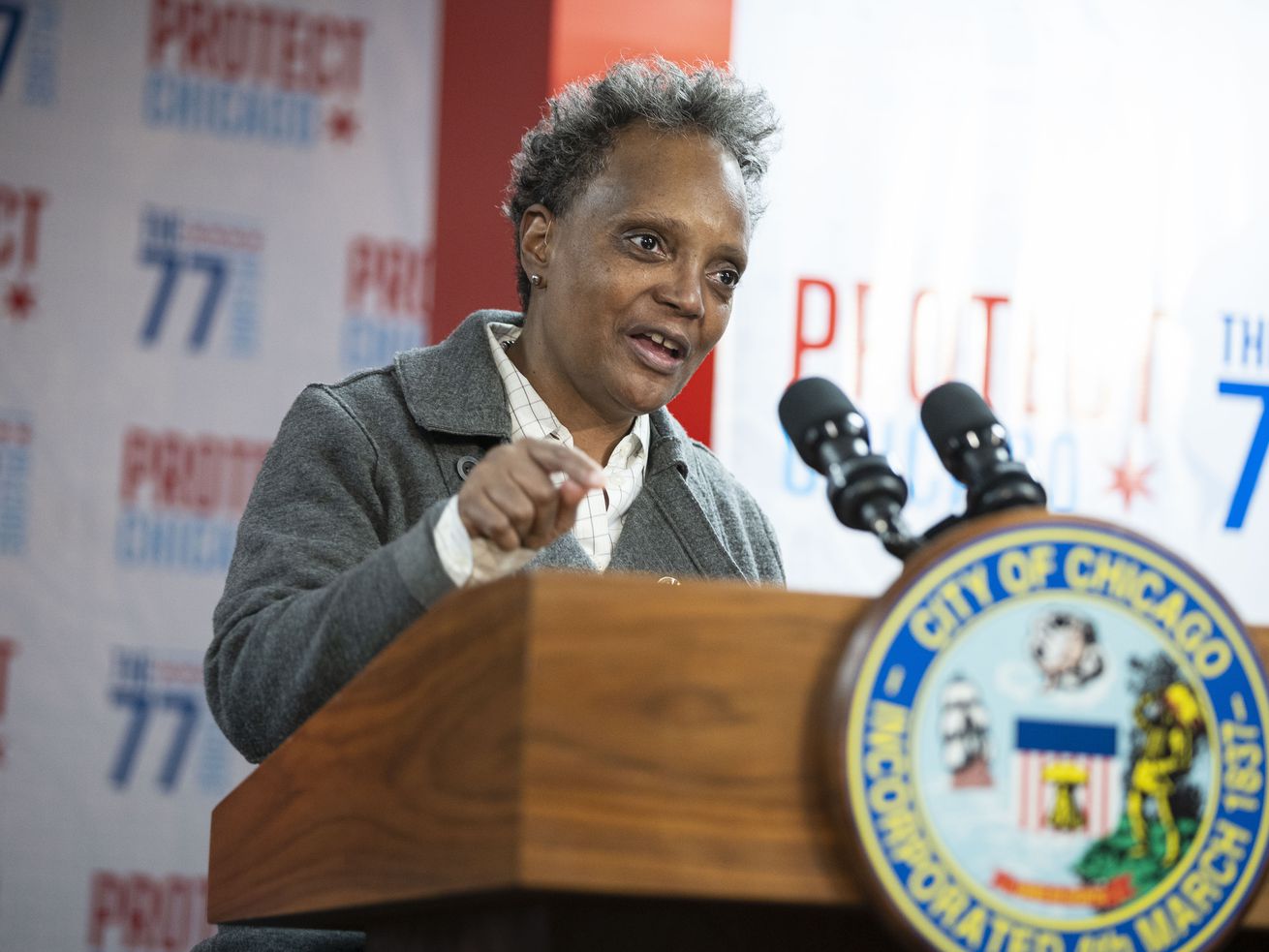 Mayor Lori Lightfoot and other city official on Monday celebrated the success of a program to vaccinate at least 77% of Chicago residents, a goal they said they would met this week. The news conference was held at the Northwest Side Housing Center. | Anthony Vazquez/Sun-Times

A large swath of the population remains unvaccinated. As of Nov. 18, 51.6% of Black residents have received at least one vaccine dose, according to the Chicago Department of Public Health. Among Latinos, the rate was 61.6%.

Mayor Lori Lightfoot on Monday announced the city will meet a pledge to get 77% of Chicagoans vaccinated by the end of this week, calling it “an important milestone in our fight against COVID.”

The mayor’s office collaborated with neighborhood organizations in outreach efforts that tried to dispel any fears and other barriers around the vaccine to boost the ranks of the inoculated.

Lightfoot had made the 77% pledge in September, seeking to get 77% of Chicago residents 12 and older at least partly vaccinated by year’s end. The city dubbed it Protect Chicago 77 — a name stemming from the city’s 77 community areas.

“We wanted to make sure that we reached that number no later than Dec. 31,” Lightfoot said Monday during a news conference at the Northwest Side Housing Center, 5233 W. Diversey Ave. “By the end of this Thanksgiving week we will reach this goal and we are reaching it 30 days early.”

The mayor anticipates they will reach that goal a full month earlier than hoped.

Lightfoot drew a comparison to how things have changed since last Thanksgiving — COVID-19 cases were climbing, there was no vaccine and people were being urged to not celebrate the holiday with people outside their immediate bubble.

“Now, less than a year later, we do have vaccines and even booster shots to keep residents as young as now 5 years old safe and protected from this deadly virus,” Lightfoot said.

Anthony Vazquez/Sun-Times
A woman holds up the badge of a Chicago vaccine ambassador during Monday’s press conference, held to announce progress on reaching the ‘Protect Chicago 77’ vaccine initiative goal. Chicago Mayor Lori Lightfoot and others addressed reporters at the Northwest Side Housing Center.

Lightfoot pointed to two city initiatives that have helped the city meet its pledge: Protect Chicago Plus focuses on 15 community areas particularly vulnerable to COVID-19, while Protect Chicago At Home provides in-home vaccinations to households.

Still, a large swath of the population remains unvaccinated, especially Black and Brown residents. Only 51.6% of Black residents have received at least one dose of the vaccine as of Nov. 18, according to data from the Chicago Department of Public Health. Among Latino residents, the number is 61.6%.

“We are still seeing unfortunately the same cycle where whites and Asians are getting vaccinated at higher rates than Blacks and Latinx,” Lightfoot said. “We have to reverse that trend because we know, based on now 20 months of experience, that it is those communities that are the hardest …read more

Could Bulls VP Arturas Karnisovas address the lack of size this season?

Bulls run into a Pacers buzzsaw, lose by 32 at the United Center