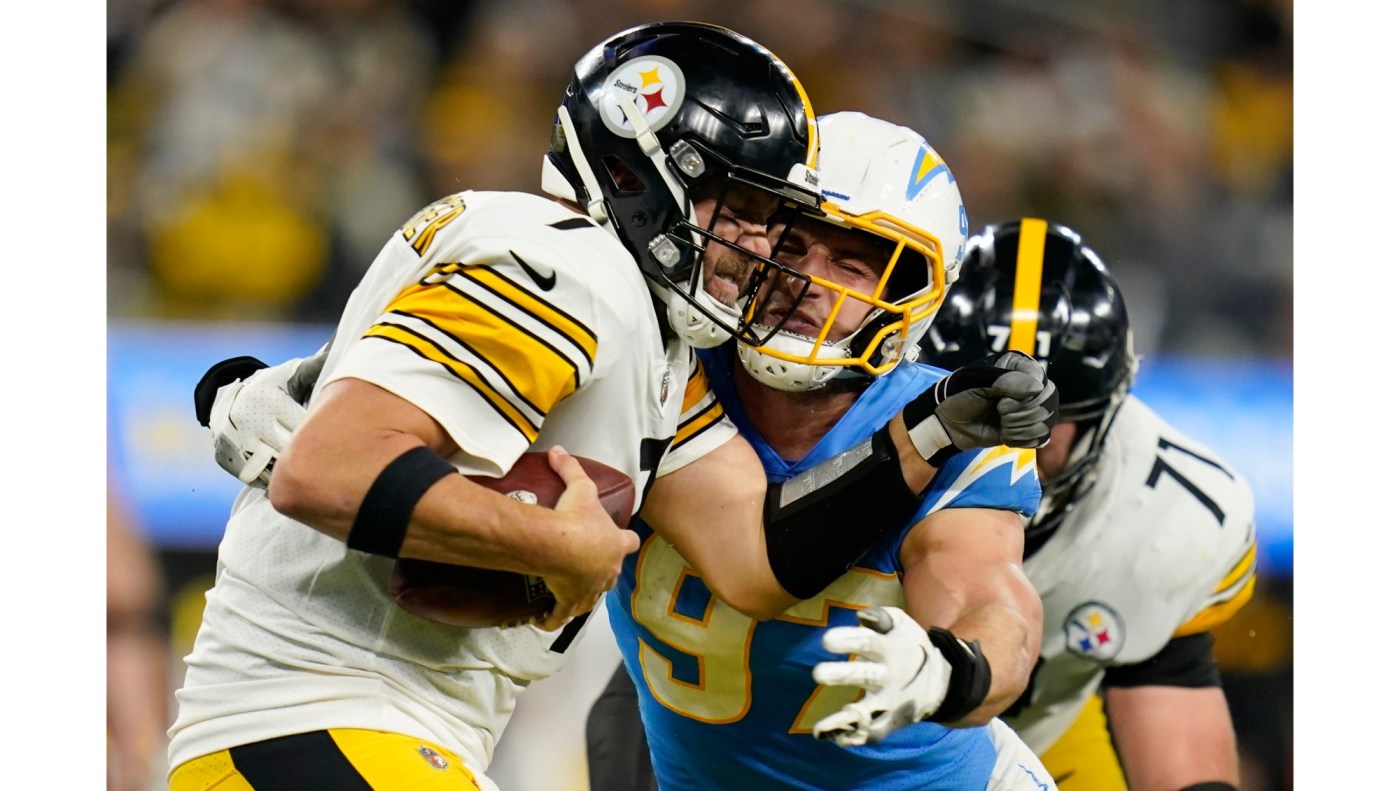 With the Chargers clinging to a four-point lead in the final minutes on Sunday night, Joey Bosa lined up in front of Pittsburgh Steelers left guard Joe Haeg and immediately traded places with Kyler Fackrell after quarterback Ben Roethlisberger snapped the ball on the first play of their final drive.

The Chargers’ edge rushers crossed paths to create space for Bosa to operate against Steelers left tackle Dan Moore Jr., but Fackrell found an open lane on the inside and sacked Roethlisberger for a loss of 8 yards.

Bosa was a split-second late, but the game plan of moving the star defender to the inside and overloading sides with edge rushers was working. Chargers edge rusher Uchenna Nwosu had a key sack earlier in the fourth quarter.

Bosa was due for a sack and got one on the play after Fackrell brought down Roethlisberger. The three-time Pro Bowler was on the inside with Nwosu to the right of him on the edge, but there was no crossover, just a bullrush from Bosa over the guard before getting to Roethlisberger.

The Steelers were faced with a third-and-29 after Bosa’s sack and eventually turned the ball over on downs as the Chargers prevailed, 41-37, in a wild “Sunday Night Football” matchup at SoFi Stadium.

“For me, I just hugged Uchenna and Kyler because they both had gotten a sack in the fourth quarter,” Bosa said of his sack celebration. “Kyler was the play before. I felt like we kind of all did it together. I feel like, as the edge group, we’ve been waiting to have a really big impact on games. I think the last couple of games we’ve been doing a really good job. To come up at the end like that was awesome. It felt great celebrating that moment with them.”

The Chargers’ creative game plans for Bosa the past two games have helped him break free from double- and triple-teams on the edge and that has also benefited Nwosu and Fackrell.

Nwosu, who started the season losing snaps to Fackrell, has found his rhythm in Brandon Staley’s defensive scheme. He had his breakout game of the season against the Minnesota Vikings in Week 10 with two quarterback hits and two tackles for loss and followed that with a standout performance against the Steelers.

Nwosu and Fackrell are competing for snaps, but they’ve been productive together on the field to make life easier on the Chargers’ star edge rusher.

“It helps him a lot,” Nwosu said. “Joey Bosa is one of the premier pass rushers of this decade. Any way that we can take pressure off of him so that he can go do his thing and be successful is great. If that’s matching him up inside on the guards, or getting an overload to one side, so that he can work on the tackle, whatever it may be, being able to send pressure or rush with four, guys getting their hands up and disrupting inside, that really frees up Joey to do his thing.”

The Chargers had …read more

Kyle Rittenhouse Rips Lawyers as They Feud Over His $2M Bail