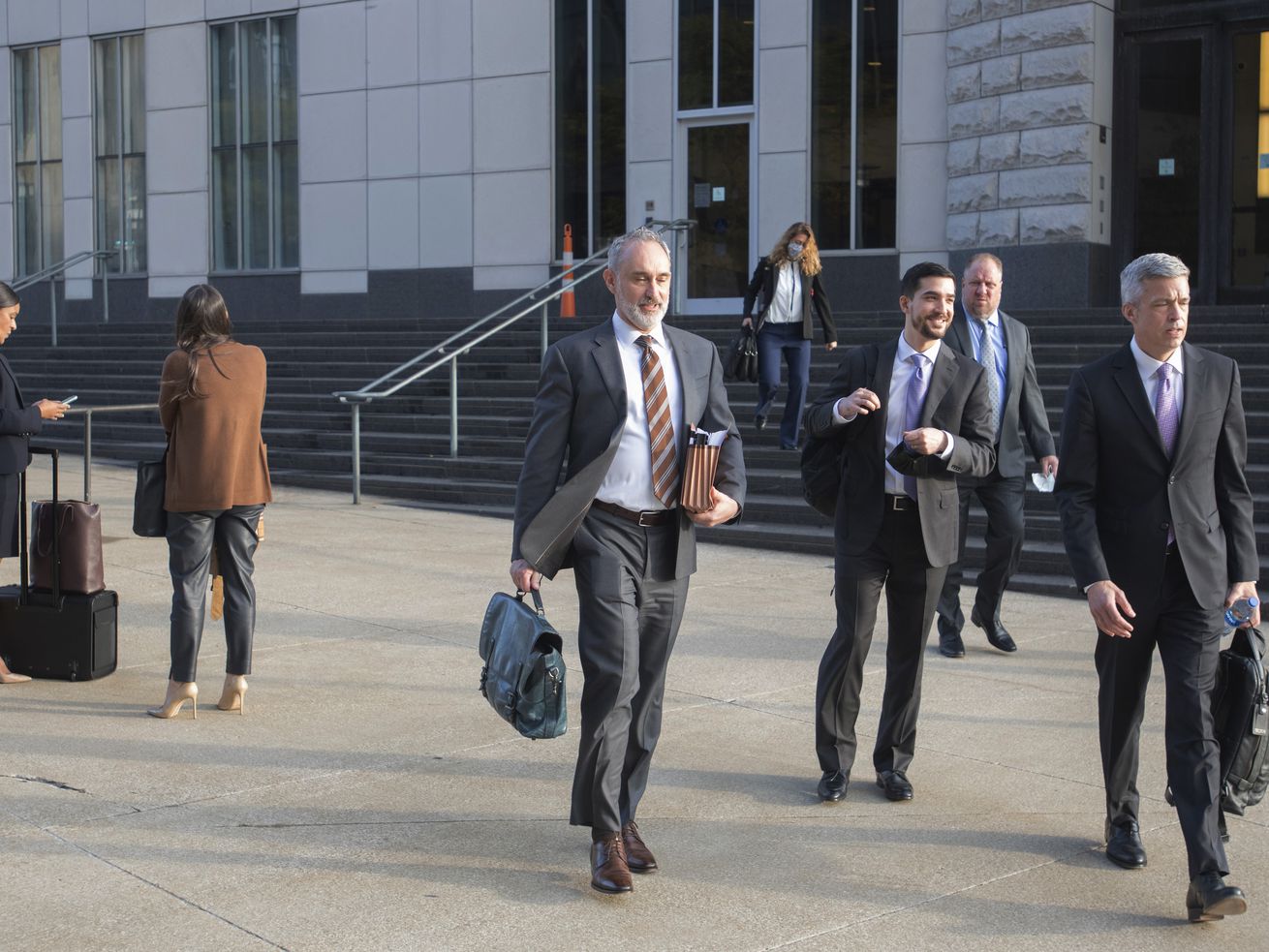 Attorneys and staff associated with a federal trial of pharmacies, CVS, Walgreens, Giant Eagle and Walmart leave the Carl B. Stokes Federal Courthouse in Cleveland, Monday, Oct. 4, 2021. The pharmacies are being sued by Ohio counties Lake and Trumbull for their part in the opioid crisis. Pittsburgh-based Giant Eagle, one of the four retail pharmacy companies on trial for their alleged roles in fostering an opioid crisis in two Ohio counties announced Friday, Oct. 29, 2021 it had settled lawsuits filed by 10 government entities in the state that have accused the companies of creating a public nuisance. | AP

The counties blamed pharmacies operated by CVS, Walgreens and Walmart for not stopping the flood of pills that caused hundreds of overdose deaths and cost each of the two counties about $1 billion, their attorney said.

CLEVELAND — Three retail pharmacy chains recklessly distributed massive amounts of pain pills in two Ohio counties, a federal jury said Tuesday in a verdict that could set the tone for U.S. city and county governments that want to hold pharmacies accountable for their roles in the opioid crisis.

The counties blamed pharmacies operated by CVS, Walgreens and Walmart for not stopping the flood of pills that caused hundreds of overdose deaths and cost each of the two counties about $1 billion, their attorney said.

This was the first time pharmacy companies had completed a trial to defend themselves in a drug crisis that has killed a half-million Americans over the past two decades.

Lake and Trumbull counties were able to convince the jury that the pharmacies played an outsized role in creating a public nuisance in the way they dispensed pain medication into their communities.

Attorneys for the three pharmacy chains maintained they had policies to stem the flow of pills when their pharmacists had any concerns and would notify authorities about suspicious orders from doctors.

They also said it was the doctors who controlled how many pills were being prescribed for legitimate medical needs.

Attorney Mark Lanier, who represented the counties in the lawsuit, said during the trial that the pharmacies were attempting to blame everyone but themselves.

Roughly 80 million prescription painkillers were dispensed in Trumbull County alone between 2012 and 2016 — equivalent to 400 for every resident.

In Lake County, some 61 million pills were distributed during that period.

The rise in physicians prescribing pain medications such as oxycodone and hydrocodone came at a time when medical groups began recognizing that patients have the right to be treated for pain, Kaspar Stoffelmayr, an attorney for Walgreens, said at the opening of the trial.

The problem, he said, was that “pharmaceutical manufacturers tricked doctors into writing way too many pills.”

The counties said pharmacies should be the last line …read more

What Is Transcendental Meditation? Experts Explain The Practice

Monday Morning Lights: After losing to De La Salle, Pittsburg gears up for unprecedented second shot at an NCS title

LA County redistricting: With time of the essence, commission zeroes in on the final-final map

Q&A: What you need to know about this new COVID variant in South Africa