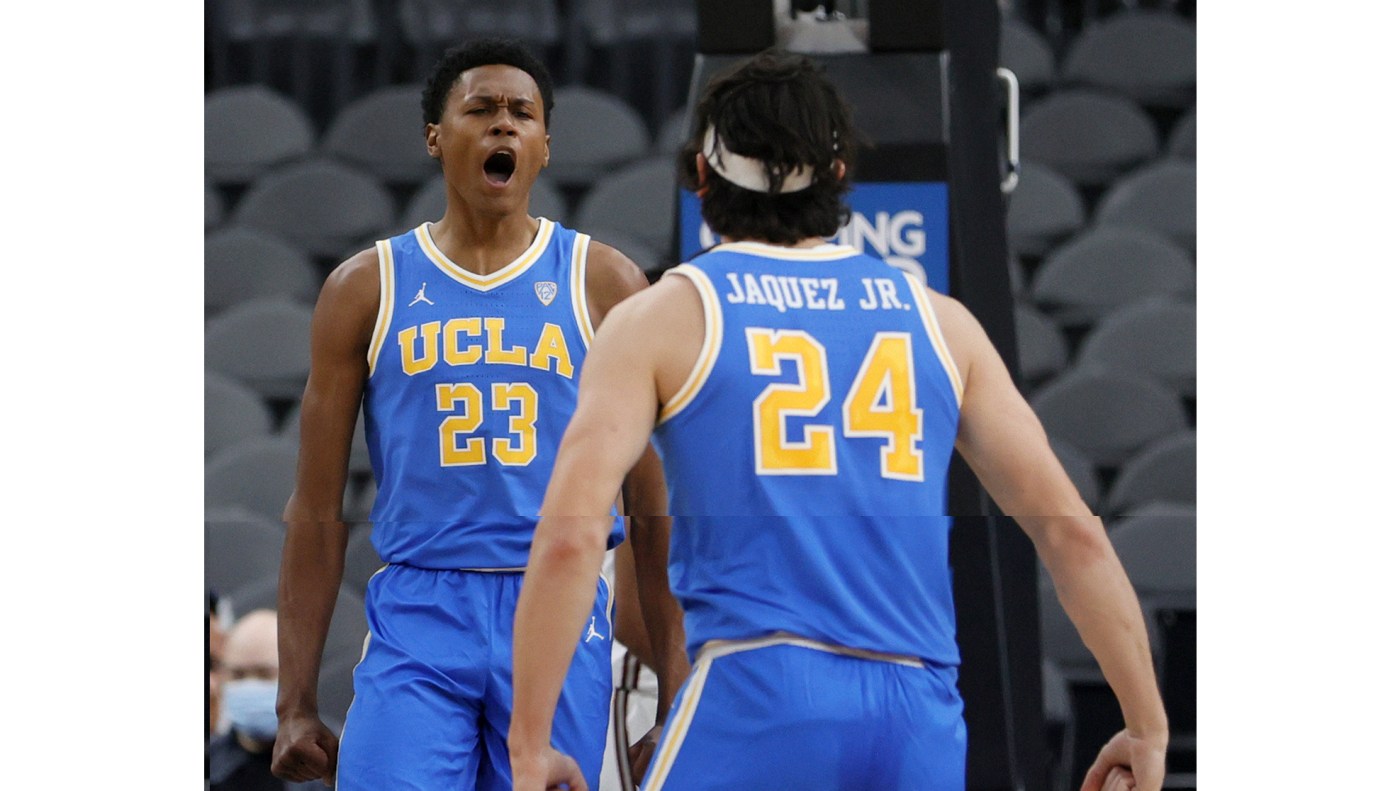 LAS VEGAS — Jaime Jaquez Jr. ripped the ball out of the hands of Bellarmine guard Dylan Penn, pushed the ball up the court and lobbed a pass toward the rim as hard-running freshman Peyton Watson was in stride to the left.

Watson leaped to catch the ball and threw it down for a thunderous dunk that provided a spark to what was otherwise an underwhelming atmosphere. It was the start of a breakout night for Watson, who finished with a career-high 19 points on 9-for-12 shooting off the bench to anchor UCLA’s 75-62 victory over Bellarmine on Monday night at T-Mobile Arena.

“Basketball is simple, you get what you deserve,” UCLA coach Mick Cronin said. “Two guys today had great attitude, great practices: David Singleton and Peyton Watson. All you gotta do is look at the stat sheet.”

If broadcaster Dick Vitale was calling the game Monday, the entire arena would have heard his “Diaper Dandy!” catch-phrase to describe Watson’s performance among the smattering of clapping and one-person “De-fense!” chants. There wasn’t even one UCLA eight-clap.

But that won’t be the case when Vitale returns to the microphone for the first time this season while battling lymphoma to call Tuesday night’s showdown between the second-ranked Bruins and No. 1 Gonzaga (7 p.m., ESPN).

If there’s any value in comparing scores against common opponents, Gonzaga defeated Bellarmine, 92-50, on Friday in Spokane, Washington.

UCLA (5-0) didn’t shoot particularly well, and that led to Bellarmine having just a 10-point hill to climb with 2:08 left. But four straight baskets, including a corner 3-pointer from Bernard in the final minute kept the Knights (0-5) at bay.

“If we’re only going to be a great team when we make shots, we’re in deep trouble,” Cronin said.

The Bruins had just one made free throw (1 for 6) in the game to Bellarmine’s 13-for-13 showing. UCLA shot 45 percent from the field, including an 8-for-27 effort from the 3-point line.

It was an opening act for a game that has generated all the buzz this week: No. 1 Gonzaga vs. No. 2 UCLA. But to Cronin, it was an act that fell flat on its face.

Gonzaga-UCLA, Part II: A sequel that had to happen

What’s next for UCLA …read more

Skiing on algae: How a Utah company wants to eliminate plastic in ski construction

The aftermath of a turbulent week at Halas Hall

Boy, 14, appears in court charged with murder of Ava White, 12