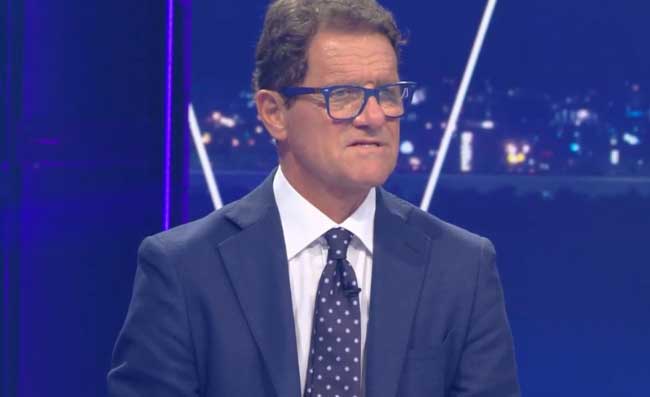 Fabio Capello says Chelsea gave a ‘real lesson in football’ with their 4-0 demolition of Juventus in the Champions League on Tuesday evening.

Chelsea have now reached the Champions League knockout phase and are now in pole position to finish top of Group H ahead of Juve.

And Capello believes Serie A needs to study the way Tuchel has got Chelsea playing and feels Italian clubs are at a disadvantage in Europe due to their slower tempo.

‘I think this was a real lesson in football from Chelsea,’ Capello told Sky Sport Italia.

‘Let’s take Liverpool for example, they play aggressively and vertically.

‘And tonight we saw Chelsea never pass the ball backwards. They never start from the back, instead they are always proactive, always forward, no passes to the goalkeeper.

‘These are rhythms that the Italian league is no longer used to. There is a big difference in speed and quality compared to our league.

‘There is another pressure. Then here are the tackles, you enter hard, the referee does not whistle for fouls that would be whistled here [in Serie A].

‘In Italy you play too much with the goalkeeper. I think they are two German coaches, maybe we need to learn from them and update ourselves.

‘A coach used to say, ‘how you train is you play’. When there is great intensity and competitive spirit and you are not used to it, it becomes difficult. When you train with not enough rhythm in the end you get these results in Europe.’

Drew Brees Opens Up About His Transition from the Field to the Broadcast Booth Ahead of New Orleans Return: ‘Using Different Muscles’

Road-Weary Chase Elliott Gets Dirty in California with Kyle Larson