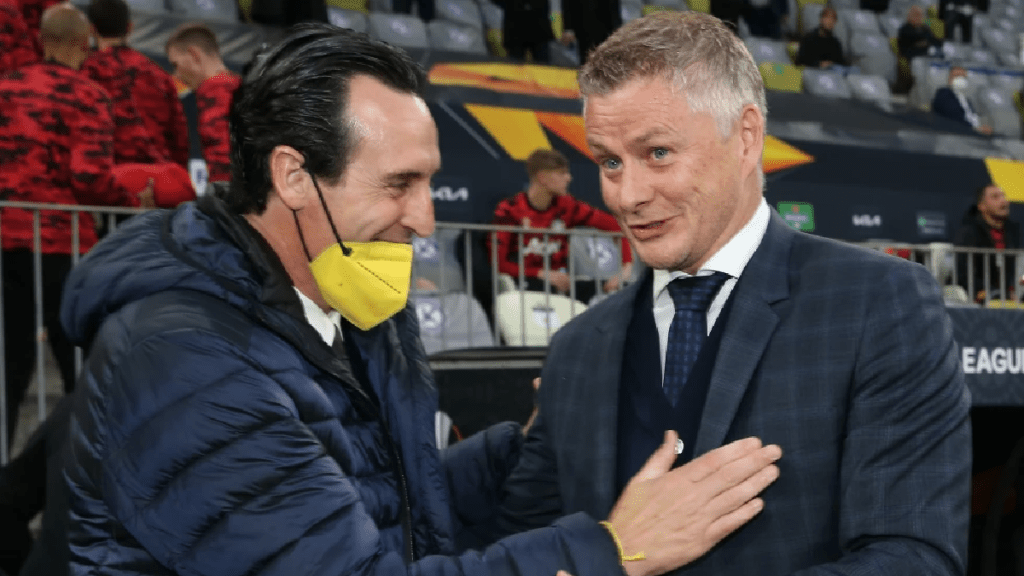 Unai Emery says a rocked Manchester United have ‘extra motivation’ to beat his Villarreal side following Ole Gunnar Solskjaer’s dismissal and expects a ‘reaction’ from the Red Devils at El Madrigal.

United head into tonight’s Champions League match – a repeat of last year’s Europa League final – on the back of a miserable run of seven defeats in 13 games and Michael Carrick has been placed in temporary charge of the club.

The squad will no doubt be hurting in the wake of their dismal 4-1 defeat at the hands of lowly Watford in the Premier League which proved the final straw for Solskjaer.

However, United can take encouragement from their record in Europe this term, with the club sitting top of Group F thanks largely to Cristiano Ronaldo’s heroics in the competition.

Emery – whose Villarreal side trail United on goal difference in second place – believes his players face a dangerous wounded animal this evening and predicts Carrick will make several changes to the starting XI.

‘They will find an extra motivation as it’s the Champions League,’ the Spaniard told reporters ahead of the clash.

‘We know they are a strong team. They need to win and I don’t think there will be many changes.

‘Perhaps certain tactical changes will be made, but we must be prepared to play against Cristiano Ronaldo, [Harry] Maguire, Bruno Fernandes, [David] De Gea and all the other great players that United have.

‘We have an opportunity tomorrow. We just want to compete, show our credentials, and enjoy it. Our last two Champions League results were good but we are facing the favourites.’

Julian Edelman Reveals Just How Close He Was to Joining Eli Manning on the Giants: ‘Almost a Giant, Always a Patriot’

Emery passed on his best wishes to ‘great person’ Solskjaer and stressed that he had ‘a lot of respect’ for the Norwegian.

‘As a coach, you don’t welcome the news that a colleague has lost his job,’ the ex-Arsenal boss added.

‘I have a lot of respect for Solskjaer because of his playing and coaching career. I’ve faced Solskjaer several times and above all, I value him as a great person.

‘When there’s a coaching change, there’s a reaction one way or another. The focus will be more on the players than on the bench.

‘The players know, even though they are professional and must always deliver, that they have to show their faces – for Manchester United, for the coach that left, and the one that has arrived or will come.

‘I expect to see a very good Manchester United because of their players and the significance of this game.’

Harriette Cole: I feel sorry for her, but my friend has become a drag

Trevor Lawrence’s Postgame Comments After Getting Humiliated by the 49ers Should Have Jaguars Fans on Edge: ‘We Got Our Butt Kicked’

NFL Thanksgiving Day 2021: The 4 Biggest Storylines for Cowboys vs. Raiders