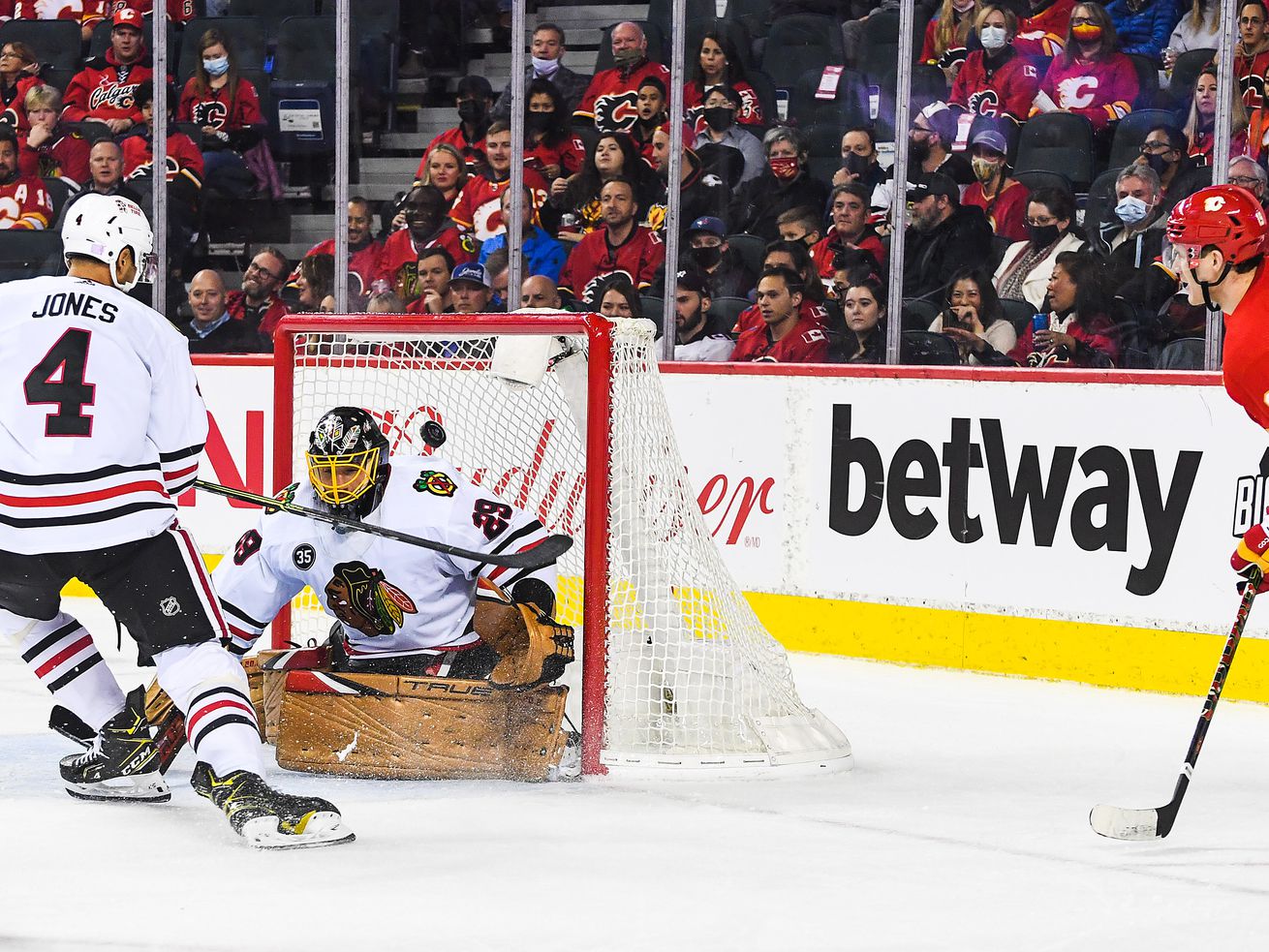 The Hawks finished their western swing 2-2-0 after the Flames pulled away Tuesday — partially thanks to two empty-net goals — for a 5-2 win.

They proved it again Tuesday, twice recovering from go-ahead Flames goals to tie the game themselves.

But the Hawks have also continued to struggle to maintain the same level throughout full games, just as they did under Jeremy Colliton. And that weakness ultimately cost them a chance for an above-.500 road trip as the Flames eventually pulled away — albeit with two empty-net goals — for a 5-2 win.

“We played a really solid second period,” King said. “We did all the little things right. We played a certain way that this team needs to play. And then the third period, we just kind of got away from it again. The consistency…is not there yet, but it’s getting there.”

King insisted his reflection on the three-hour overnight flight back to Chicago would be a positive one. And after entering this trip without a single road win this season, going 2-2-0 out west isn’t awful.

But the Hawks had a very real chance to win Tuesday and finish the trip 3-1-0 until Matthew Tkachuk banked the eventual game-winning goal off Seth Jones’ skate with 5:45 left.

“They have to bring some passion,” King said. “For the most part, we did. And then we just have those little lapses where I don’t know if we go to sleep or we overthink it or start gripping the stick again. Because [I’m thinking], ‘Hey, it’s 2-2. We might have a chance to win this.’ And the confidence isn’t there. We’ll keep working at it.”

Bay Area TV Sports: What to watch over the weekend

The Hawks were heavily outshot again, 39-21, after the Canucks manhandled them 40-24 in that category Sunday. But Tuesday’s shot counter didn’t fully reflect the relative balance of play between the two teams.

There were some positives within the loss, too. Saskatchewan native Reese Johnson scored his first career goal in front of numerous family and friends in attendance.

And Kirby Dach played one of the best games of his career, fighting Blake Coleman one minute into the game and then repeatedly muscling his way to the front of the net for the remaining 54 minutes after his penalty. King said he “loved” Dach’s performance.

“It’s been a while since I’ve seen a puck go in, obviously,” he said. “I definitely like scoring goals. So I’d like to get going in that area. Just got to keep working through it.”

Toews has continued to play well in other areas, although the Flames did record 11 scoring chances to the Hawks’ four during his ice time Tuesday. But he hinted he might not be feeling 100% physically at the moment.

‘Tranquil’ Thanksgiving weather for most of the country

‘Standing in a street with a banner’ is unlikely to make a difference, says headteacher

High school football championships: Scores from all of the games Friday and Saturday