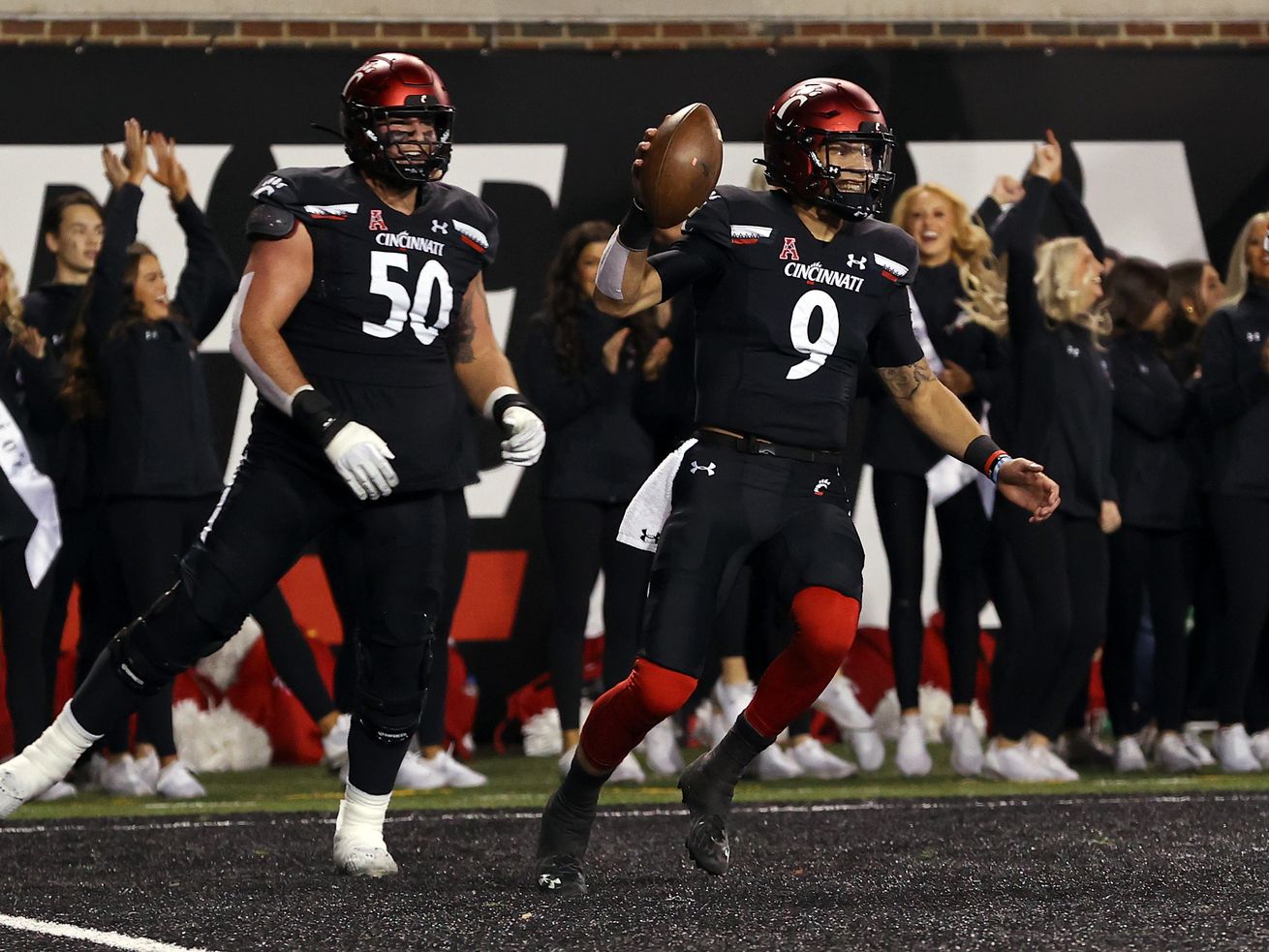 Dylan O’Quinn #50 and Desmond Ridder #9 of the Cincinnati Bearcats celebrate after scoring a touchdown in the third quarter against the SMU Mustangs at Nippert Stadium on November 20, 2021 in Cincinnati, Ohio. | Dylan Buell/Getty Images

The Bearcats are fourth behind Georgia, Ohio State and Alabama

Cincinnati moved into position to make the College Football Playoff on Tuesday night, climbing a spot to fourth behind Georgia, Ohio State and Alabama.

A team from outside the Power Five conferences has never been selected for the semifinals in the previous seven years of the College Football Playoff.

Heading into the final full weekend of games, one loaded with playoff and conference championship implications, Cincinnati (11-0) seems to have a realistic path to a playoff spot no matter what happens around the Bearcats.

Cincinnati plays at East Carolina on Friday and then meets Houston (10-1), ranked 24th by the committee, in the American Athletic Conference championship game on Dec. 4.

Before this season, no team from a so-called Group of Five conference had ever been ranked better than seventh by the CFP selection committee.

Michigan is fifth heading into its game against Ohio State that should produce the Big Ten’s best shot to make the playoff.

Notre Dame (10-1) is sixth. The Fighting Irish’s only loss is to Cincinnati.

Oklahoma State (10-1) at seventh is the highest ranked Big 12 team.

Big 12 rivals Baylor (eighth) and Oklahoma (10th) round out the top 10 with Mississippi in between.

The Sooners play at Oklahoma State on Saturday in a game that will help determine who plays in the Big 12 title game.

The final CFP rankings will be revealed Dec. 5 and the top four teams will play in the semifinals on Dec. 31 in the Orange and Cotton bowls. The national championship game is scheduled for Jan. 10 in Indianapolis.

Is liability the same if a person who is homeless is the one injured? Ask the lawyer

Man charged with first-degree murder in fatal shooting in July in Chatham: police