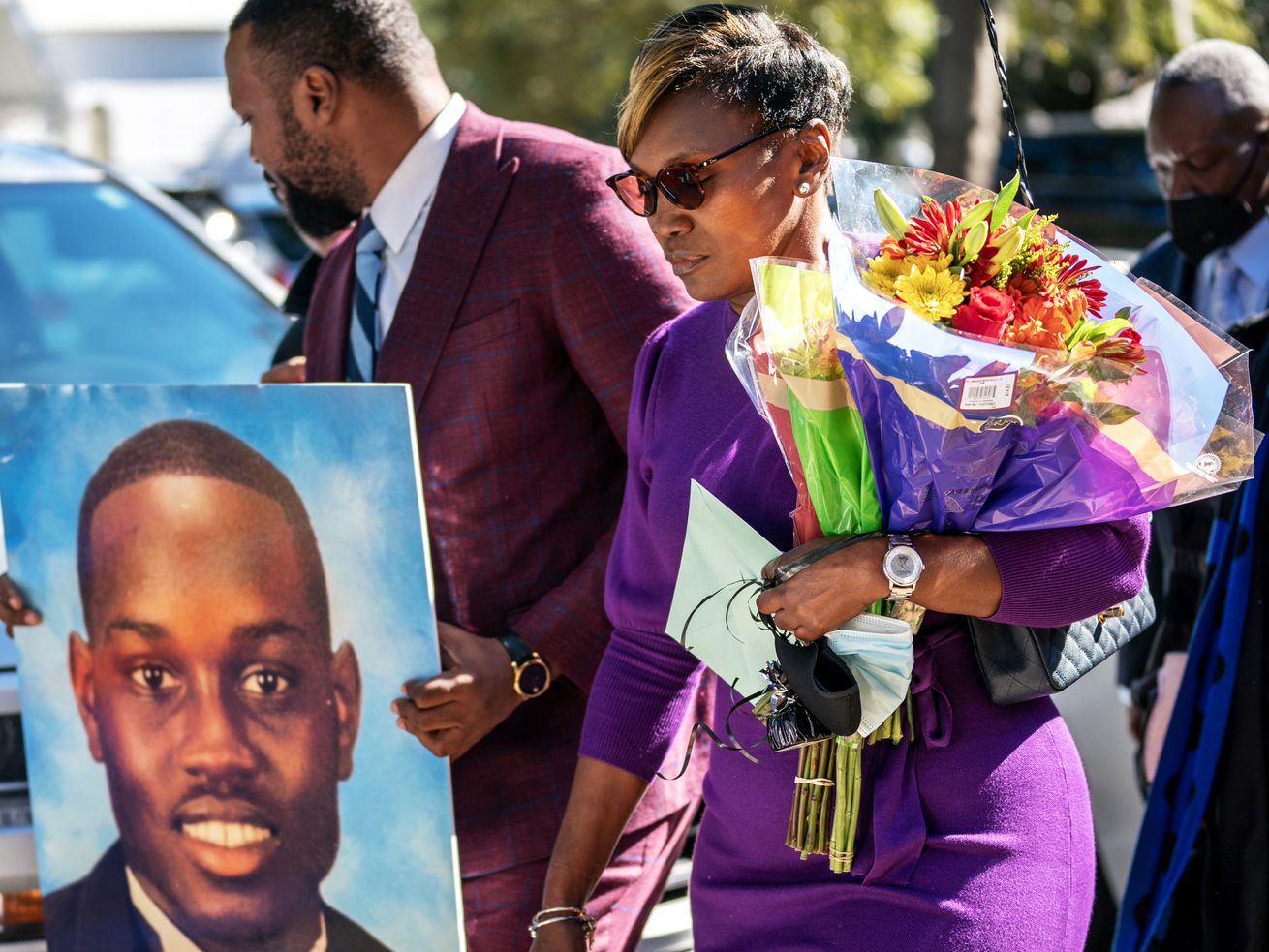 Ahmaud Arbery’s mother, Wanda Cooper-Jones, leaves the Glynn County Courthouse in Brunswick, Georgia, as jury deliberations begin in the trial of the killers of her son, 25-year-old Ahmaud Arbery, pictured in the poster at left. | Sean Rayford/Getty Images

After deliberating for roughly 11 hours, a jury in Georgia has found three men — Gregory McMichael, Travis McMichael, and William “Roddie” Bryan Jr. — guilty in the murder of Ahmaud Arbery.

Arbery, a 25-year-old Black man, was out for a run on the outskirts of Brunswick, Georgia, when the three white men cornered him with their vehicles and shot him dead. Video footage of the murder was viewed by millions of people in May 2020, sparking a widespread outcry about America’s disregard for Black life. The men pursued and shot Arbery in February 2020; the guilty verdict was nearly two years in the making.

Though the widely circulated video of the encounter shows most of what transpired when the men chased Arbery, the outcome of the trial was far from clear at the start.

One defendant, Travis McMichael, who shot Ahmaud Arbery, was found guilty of the first and most serious count of the indictment, malice murder, and eight other felony charges. William Bryan and Gregory McMichael received split verdicts. They were found guilty of multiple counts of felony murder and one count of aggravated assault, false imprisonment, and criminal attempt to commit a felony.

Is a college degree still worth the time and money?

Arbery became an avatar of the Black Lives Matter movement after his death, and the verdict is a significant moment in the struggle to receive justice for slain Black Americans. Still, the decision comes at a time when many activists believe social justice progress is being undone by laws that seek to restrict voting rights access or limit the scope of American history that’s taught in schools, while the Covid-19 pandemic continues to disproportionately affect historically underserved communities.

The verdict may come as a surprise, given that many activists and experts say the legal system tends to favor white men who claim self-defense: The defendants argued their actions fell under a Georgia citizen’s arrest law, created during the slavery era, that has since been repealed.

“What was at stake in this trial was reframing what and who we believe the rule of law will protect and is meant to protect — whether that is white supremacist ideology or the standard of true justice,” said Tiffany Jeffers, a professor of law and legal practice at Georgetown University Law Center. “This verdict hopefully quells white supremacist ideology and tells those individuals that [violence] is unacceptable.”

Whether the verdict changes behavior or not, Arbery’s death has already led to legal reform in Georgia, including the passage of a hate crimes law as well …read more

All 3 men charged in Arbery’s death convicted of murder

‘Hawkeye’: How to Watch the Live-Action Marvel Series Online

They said it: Regrets from the accused