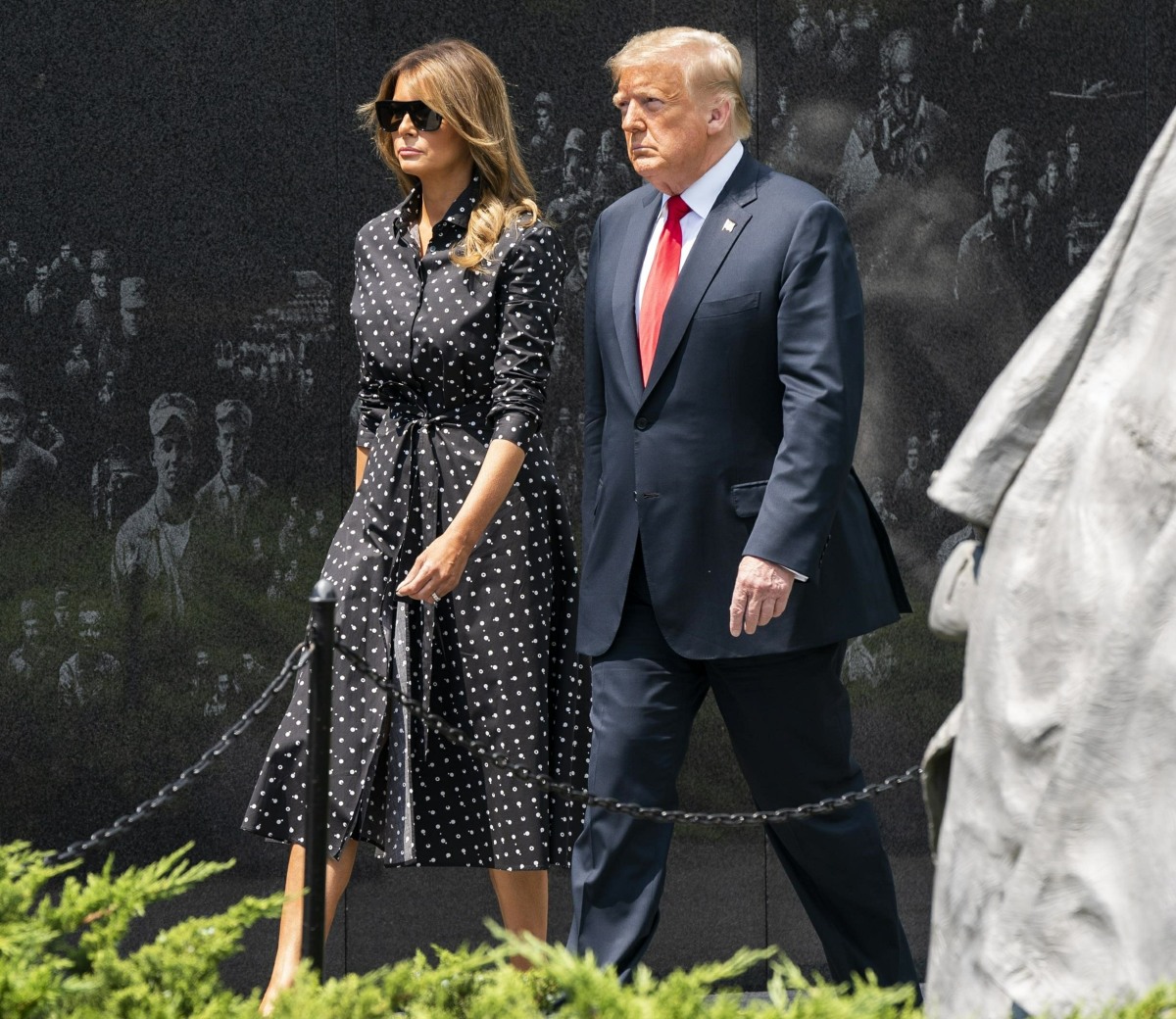 Here are some photos of Donald and Melania Trump laying a wreath at the Korean War Memorial in Washington yesterday. I’m actually surprised Melania (not Fauxlania) came out for this. She probably wanted to show off her new dress. Yesterday, Trump also took part in a Fox News Town Hall, which very few people actually watched. Thankfully, there were some journalists covering it, which is how we got these quotes where Trump is seemingly resigning himself to the fact that Joe Biden is going to win:

For the second time this week, President Donald Trump appeared almost resigned to the idea that former Vice President Joe Biden will beat him in November, telling Fox News’ Sean Hannity that Biden “is going to be president because some people don’t love me.” During a town hall in key swing state Wisconsin, Trump fell back on his well-worn attack lines against his Democratic opponent, painting Biden as too old and suffering from cognitive decline.

“Whenever he does talk, he can’t put two sentences together,” Trump exclaimed. “I don’t want to be nice or un-nice. The man can’t speak.”

At the same time, the president seemed to acknowledge current polling, which shows the ex-veep up by double digits nationally and leading in most battleground states—including Wisconsin, a must-win for Trump. “And he is going to be president because some people don’t love me, maybe,” Trump said. “And all I’m doing is doing my job.”

The president insisted that before the “China plague” hit, the country was enjoying the “best job numbers we ever had” and the “best economy we ever had.” He then pivoted to complaining about China, which he said “ate our lunch” before he entered office.

Graziano di Prima and Giada Lini speak to OK! about their postponed wedding

[From The Daily Beast]

“And he is going to be president because some people don’t love me, maybe.” Just… no, I’m not even going to unwrap it. Trump also lied and said Biden doesn’t want to debate, when Biden is actually the one who has confirmed to the debate commission that he’ll do three debates. Trump was also asked about what his priorities would be if he got a second term, which led to this deranged word salad:

Here’s the transcript of Trump’s response when he was asked what are his top priorities for a second term. pic.twitter.com/XKMawRiXFs

Yeah. Meanwhile, all of that BS was probably just Stephen Miller’s cover for trying to dismantle the ACA/Obamacare yet again. In a late-night brief, the Trump administration is arguing the same old sh-t:

The Trump administration is asking the Supreme Court to wipe out Obamacare, arguing that the individual mandate is unconstitutional and that the rest of the law must be struck down with it.

The late-night brief, filed Thursday in the middle of the coronavirus pandemic, carries major implications for the presidential election. If the justices agree, it would cost an estimated 20 million Americans their insurance coverage and nullify protections for pre-existing conditions.